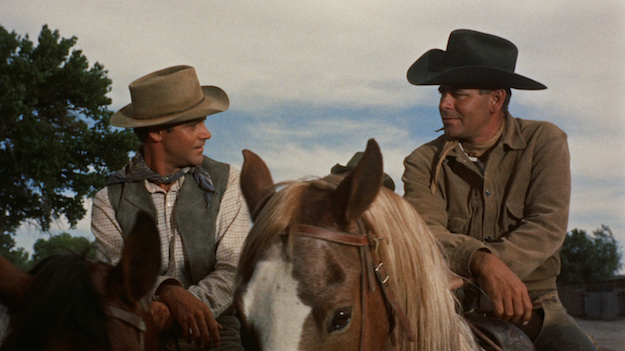 Springing from the same collaboration that brought us the Criterion Collection-worthy westerns 3:10 to Yuma and Jubal, the 1958 effort from director Delmer Daves and star Glenn Ford, Cowboy, is belatedly getting its moment of home video appreciation. Correcting the faux pas of their 2002 DVD, which didn't even see fit to offer the film in a widescreen aspect ratio, Sony has given this lesser-known gem a right purdy A/V polish (one that's up to the high standards of their many recently refurbished catalog titles distributed by Twilight Time).

Pitched at the time as a more realistic look at Western life than your average TV or film roundup, Cowboy still has an admirable toughness to it that does indeed stand out from the herd. The unusual casting of Jack Lemmon as Glenn Ford's would-be friend and oft-times antagonist proves to be an unexpected godsend as well.

Lemmon plays Frank Harris, a Chicago hotel clerk with big ideas about becoming a cattle herder. When Glenn Ford's big-deal cowboy Tom Reece and his trailhands comes for a stay in the hotel where Harris works, the lowly clerk sees an opportunity. Reece drunkenly gambles away the money he needs to bankroll his next cattle drive, so Harris offers Reece his life savings if they can be partners. Reece agrees in the moment, but after his luck has changed and Reece has won back most of what he's lost, he immediately tries to shake this inexperienced kid. Harris proves hard to shake, so Reece ends up giving him a crash course in the difficulties of cowboy life.

While another film might have approached Harris's initial adjustment to life on the drive with a goofy montage, Cowboy pretty much plays it straight. Besides a predictable gag where Harris gets stuck with a horse that initially looks too wild to ride and a brief moment where Harris gets his sore backside "toughened up" with a splash of whiskey, the film never characterizes Harris as anything but determined. With Jack Lemmon in the role, Harris consistently confounds expectation by not being the awkward nebbish one might initially expect.

The film's main tension derives from the fact that even though Harris is fairly adept at adjusting to cowboy life, his personality does not mesh with Reece or the men around him. The other cowhands -- played by familiar faces from the era like Dick York, Richard Jaeckel, old-timer Brian Donlevy, and an uncredited Strother Martin -- are fairly good-natured but they've also got a detached mercenary streak that disturbs Harris. When the cook dies because of a prank gone fatally awry, Harris is chilled to the bone by Reece's pragmatic reaction. When one of the hands sets himself for an ambush in a cantina by hitting on the wrong guy's girl, Harris is similarly shocked to see none of the other hands stepping up to make it a fairer (movie-style) fight.

Besides the thread of Harris's disillusionment, the script (credited to Edmund North, fronting for the blacklisted Dalton Trumbo, and based on Frank Harris's memoir) is largely concerned with a surrogate father-son relationship between Reece and Harris, with Reece pushing Harris so much that it ends up making him hard instead of tough. When Reece realizes what his influence is doing, he tries to soften a little bit, causing a momentary role reversal between the gruff cowboy and his emotionally driven partner. Considering that the film ends with the two of them, celebrating with drinks and smiles in adjoining bathtubs, it is also tempting to categorize their contentious dynamic throughout most of the film as a classical bromance. Certainly there are more sparks between these two characters than between Harris and the Mexican cattle rancher's daughter (played by Marlon Brando's then-wife, Anna Kashfi) who is Harris's purported love interest.

Besides its attempts at realism (or, at least, a '50s Hollywood notion of realism), Cowboy is notable also for a handful of pulse-pounding setpieces. One of them involves Reece taking up a challenge to place a small ring on the horn of a vicious bull, in a small arena already packed with livestock. Another involves an ambush by Comanches during a cattle stampede.

Cowboy certainly is as well-crafted and as memorable as the prior Delmer Daves-Glenn Ford westerns, and fans of those films should certainly give this one a try. 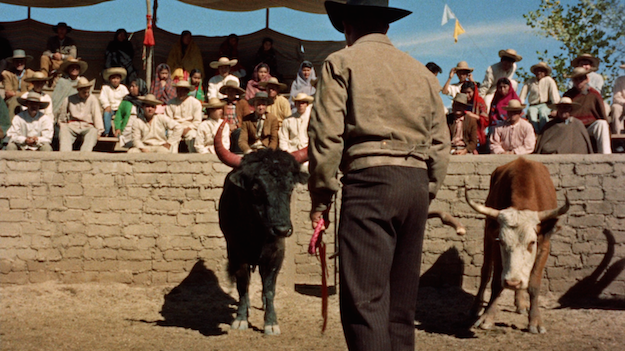 The Blu-ray
Cowboy comes in a limited edition of copies. The disc is packaged with a color booklet featuring an essay by Twilight Time's Julie Kirgo.

The Video:
This AVC-encoded 1080p 1.78:1 transfer is hands-down one of the best transfers to come out of the Sony-Twilight Time partnership. The film looks clean and vibrant, with excellent detail reproduction, a rich Technicolor palette, and strong blacks with good shadow detail during the many night scenes. Some viewers might look askance at that anachronistic 1.78:1 aspect ratio, but none of the compositions seem meaningfully impacted by this framing selection.

The Audio:
The soundtrack is also quite satisfying and clean, with the DTS-HD MA mono audio offering a well-layered mix of dialogue, effects, and music. I made note a few times during some of the quieter scenes how nicely built the background ambience was without overwhelming the dialogue. One subtitle option: English SDH.

- Seydor, a Western film scholar who has appeared on a handful of Sam Peckinpah commentaries with TT's Redman, brings his expertise and appreciation to this chatty and entertaining commentary. During a few stretches, the three commentators talk at cross purposes, which is a minor distraction. For the most part, though, they provide energetic opinions and enlightening background info on the flick.

Final Thoughts:
The unexpected casting of Glenn Ford and Jack Lemmon as begrudging partners on a cattle drive is just the first of many unusual ideas that pay off beautifully in this neglected gem. With its unsentimental, no-nonsense approach to Western filmmaking, Cowboy is going to surprise a lot of folks -- in a good way. The new transfer looks glorious and sounds great too. Recommended. 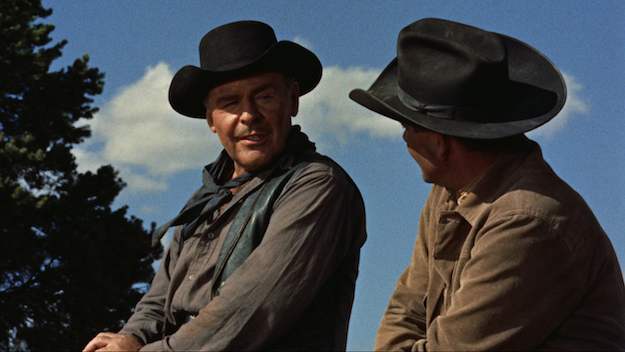