Bold Ones: The New Doctors - The Complete Series, The

Shout Factory // Unrated // March 1, 2016
List Price: $59.99 [Buy now and save at Amazon]
Review by Stuart Galbraith IV | posted March 20, 2016 | E-mail the Author
The New Doctors (1969-73), like Timeless Media's and Shout! Factory's earlier release of The Protectors (1969-70), was one spoke of a "wheel" show of three alternating one-hour dramas, all produced by Universal Television and under the umbrella title The Bold Ones. The New Doctors was by far the most successful of the four series that eventually ran under that banner, the others being the short-lived The Protectors (1969-70), a Law & Order antecedent starring Leslie Nielsen and Hari Rhodes; The Lawyers, with Burl Ives, Joseph Campanella, and James Farentino, which had a three-year run; and, after The Protectors was cancelled, The Senator, starring Hal Holbrook. That series was critically lauded but lasted only eight episodes. (That show's producer, David Levinson, went over to The New Doctors and slightly improved its fourth season.)

Most of the Bold Ones shows were adapted from earlier made-for-television movies, but The New Doctors was the exception. Based at the "David Craig Institute for New Medicine" in Los Angeles, the series starred E.G. Marshall as neurosurgeon Dr. Craig, David Hartman as Dr. Paul Turner, and John Saxon as Dr. Theodore Stuart, the latter medicos symbolic of the vanguard toward new surgical and treatment techniques.

Ironically, both medical advances and the growing sophistication and realism with the hospital drama sub-genre since then have rendered what might have seemed cutting edge drama and technology of the time extraordinarily quaint and dated by today's standards. It's not without interest, but I found The Protectors fascinating as a time capsule of urban American politics at a time of tremendous racial and economical strife. The New Doctors, though sincere and boasting some good performances, merely seems old-fashioned.

The series arrives on DVD courtesy Shout! Factory and Timeless Media, using old but acceptable video masters. Most of the episodes appear to be syndication masters as they run about 46 minutes, while at least one runs 49. In a single DVD case, it includes all 44 episodes, including a rare two-part crossover episode with Ironside. (The set includes both episodes.) 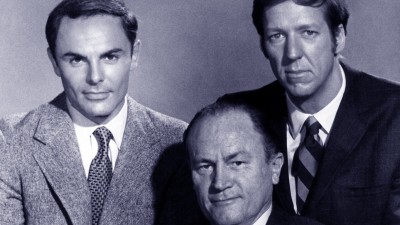 The first, and apparently highly-rated, episode exemplifies the show's strengths and weaknesses from a 2016 perspective. In "To Save a Life," a young Hispanic man is the victim of an auto accident, briefly pronounced dead at the hospital but brought back to life, albeit on life support and apparently brain dead.

He seems an ideal organ donor for Dr. Stuart's patient, nervously awaiting a new kidney. However, the accident victim's doctor, an older generation sawbones named Dr. Ben Gold (Pat Hingle), foolishly promises the man's wife, Elena (Linda Dangcil) that he'll perhaps recover, and takes great offense at the rush to have Elena sign over her husband's kidney before he's technically deceased. Further, Gold symbolizes the old guard of American medicine: a country doctor (albeit in Los Angeles) who forms personal, deeply trusting relationships with his patients, and ambivalent toward advances in the medical profession he doesn't see as concerning him.

Written by Irv Pearlberg, previously an associate producer of Dr. Kildare and later a story editor on Quincy, M.E., "To Save a Life" should be commended for grappling with two timely subjects: organ transplants (the first successful heart transplant surgeries very much in the news at the time) and medical advances that have blurred the line between life and death. However, the program isn't realistic at all in the manner in which the debate plays out. Dr. Gold, for instance, interacts with the would-be organ recipient and practically brawls with the man's adult son. There's lot of other cross-patient interaction that, at least today, is never permitted for obvious reasons, and the script conveniently circumvents matters like donor waiting lists, conveniently dropping a perfect kidney in Dr. Stuart's lap, so to speak.

Further hampering things is Hingle's broad, hammy caricature. It's an indulgent performance, making Gold appear reckless and unprofessional throughout, almost a danger to his patients, though that was clearly not Pearlberg's intention.

Richard H. Landau, Paul Mason, and a young Steven Bochco created The New Doctors. Landau worked as a writer-producer on both good and bad shows in every conceivable genre, while Mason worked primarily at Universal Television, and later became an executive at Viacom, including the later Diagnosis: Murder. Bochco, still in his twenties, was brand-new to television; The New Doctors seems to have been his very first credit in the medium.

The series went through some minor changes during its four-year run. Julia Adams (Creature from the Black Lagoon) appeared in some second-season shows as Craig's wife, Lynn, and Robert Walden (Lou Grant) replaced Saxon for most of the final season.

Using old masters, The Bold Ones: The New Doctors looks about as good as one would expect for the release of such an obscure, older series. Even on my 90-inch screen, I nonetheless found it perfectly acceptable other than the fact that some of the shows may have been cut by up to three minutes. The mono audio, English only with no subtitle options, is adequate. The series is presented across two single-sided discs. No Extra Features.

Not bad but more dated and less interesting than the short-lived Protectors, The Bold Ones: The New Doctors is not without interest, but I wasn't bowled over. Rent It.