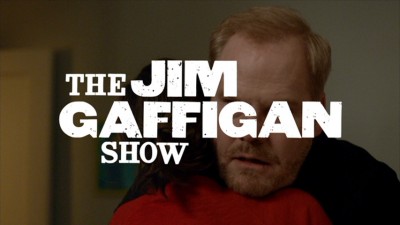 
The Show
It took a good long while and three separate networks in order to get Jim Gaffigan into a sitcom, but finally TV Land managed to put The Jim Gaffigan Show on the air. It's a bit of a surprise that it took so long, since few comics have the kind of mass appeal Gaffigan has cultivated thanks to a silly repertoire of jokes, including his famous riff on the Hot Pockets jingle (which makes one wonder when Brian Regan will get his show.) A single-camera sitcom, the series is based on the comic's life, shared with his wife Jeannie (portrayed by Ashley Williams) and their five children, and falls right in line of with the toe of Gaffigan's stand-up. The plots include traditional issues in married couples and in families with children, like Jim and Jeannie wanting to spend their anniversary alone or Jim attempting to be more help around the apartment, though the business side of comedy is also a part of the series, along with some more unusual elements that are fitting based on Gaffigan's act.

Gaffigan and Williams have excellent chemistry as a loving couple dealing with the imperfections in their lives (often in the form of Jim), while Adam Goldberg and the terrific Michael Ian Black round out the main cast, as Jim's comic pal Dave and Jeannie's gay ex-boyfriend Daniel, respectively. Goldberg's dirtbag character is a solid counter to good-guy Jim, enabling situations that get out of hand more than Jim would on his own, while the politely combative pair of Jim and Daniel is always good for laughs (though why Daniel is always at the apartment doesn't make a great deal of sense.) Aside from the core four, the series is filled to overflowing with cameos, including actors like Nathan Lane, Matthew Broderick, H. Jon Benjamin, Alec Baldwin, Robert Smigel, Fred Armisen and Janeane Garofalo, as well as some of the best in stand-up. The who's who list features names like Chris Rock, Dave Attell, Jon Stewart, Bill Burr, Colin Quinn, Judah Friedlander, Hannibal Buress, Eddie Gilbert Gottfried, James Adomian, Whitney Cummings and John Mulaney, and they all add a little something to the show, rather than being just stunt casting. 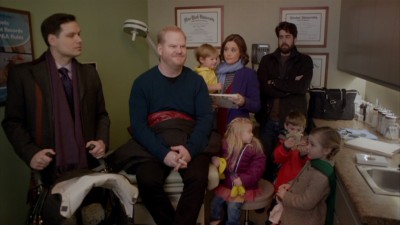 Though the general feel of The Jim Gaffigan Show feels like any comic-led sitcom of the last 25 years or so, with the marital and familial set-ups and the shenanigans brought on by the lead's off-kilter best friend, it can get weird and unusual, and when it does, it gets great, like with the ongoing appearances by Macaulay Culkin, which becomes one of the best-handled celebrity cameos in TV history and a prime example of the show's willingness to do the unexpected. The same can be said for one of the best episodes this season, which sees Jim sent to pick up a bible from his church's priest (the delightful Tongayi Chirisa). This little errand sets off a series of misunderstandings involving religion that pits the world against the usually genial comic (though the show, which has no ongoing plots, quickly hits the reset button to avoid losing hold of its tone.) The character of the Gaffigans' priest, who gets an episode of his own to shine, is an enjoyable one rarely seen on TV, as he is simply a good-natured man of God, with no secrets and no complexities. He's just happy to serve and believes the best of everyone, which helps make Gaffigan uncomfortable due to his own Catholic guilt, building some fun, awkward comedy between the two.

As good as the show is, especially at the height of its powers--like the comedy of errors in "The Plaza"--the final episode of the season is an awkward misstep, as the family man flips out on his wife, upsets his kids and expresses regret over ever starting a family, launching into a classic It's a Wonderful Life storyline that erases his wife and child from the picture (courtesy of yet another odd cameo in the form of Steve Buscemi.) Though it's somewhat entertaining to see how the other characters' lives differ in this alternate universe, it's well-worn territory and it just doesn't work for the show's dynamic, a fact proven by an unusual hail-mary ending that's redeemed only by capping off a season-long running gag. Thankfully, there's a second season coming to get back to normalcy. 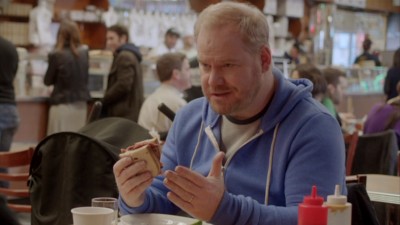 The Discs
The first season of The Jim Gaffigan Show arrives on a pair of DVDs, packed in a standard keepcase with a tray. The discs feature static anamorphic widescreen menus offering options to play all the episodes, select shows and turn on the subtitles. There are no audio options, while subtitles are available in English.

The Quality
The Jim Gaffigan Show is impressively artistic in its visuals, and the anamorphic widescreen transfers look very good, with well-saturated color and appropriate skin tones, while the level of fine detail is sufficiently high (if, at times, the image is a touch soft.) Black levels are nice and solid, allowing the show's interior and night scenes to look nicely defined. Digital distractions are not a problem.

The audio is presented in Dolby Digital 5.1, which mainly comes alive when it comes to the show's terrific music, courtesy of Reggie Watts, utilizing the surrounds and the low-end to fill out the sound. Dialogue is clean, while there's some minor atmospheric effects in the sides and rears in comedy clubs and when outdoors. Nothing about the mix is particularly adventurous, but it gets the job done.

The Extras
It's like the anti-Hot Pocket: there's nothing tasty stuffed in here. 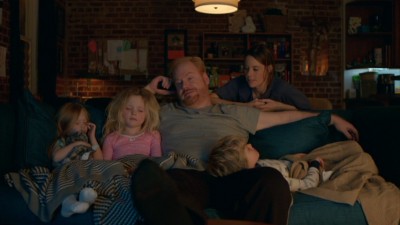 The Bottom Line
Gaffigan's comedy cuts across plenty of demographics, with an act that's quirky yet relatable. His sitcom offers more of what people already enjoy about him, just in a different format and with loads of your favorite comedy people (as well as some delightfully off-beat treats.) It's the kind of show that will appeal to lots of people for lots of different reasons. But while the quality is solid, there are no extras to add value to the package. Fans of Gaffigan will want to revisit the show, so owning it is a good idea, but if you're a once and done viewer, a rental will cover you.