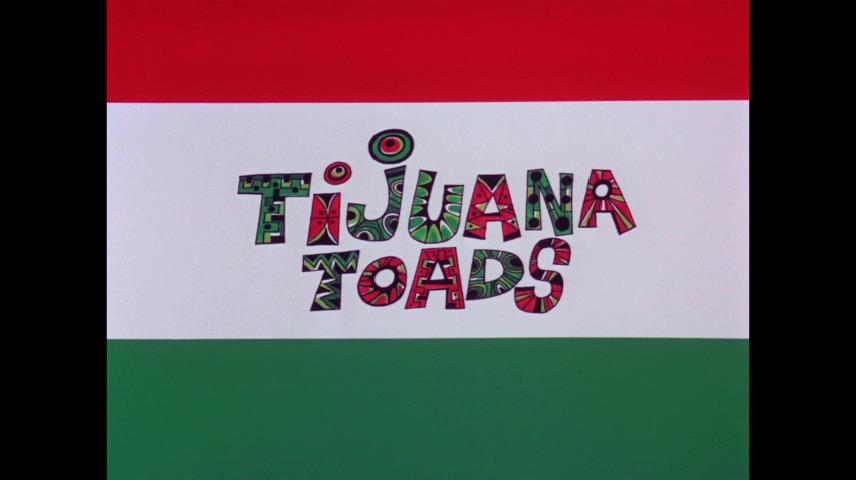 Continuing Kino Lorber's DePatie/Freling Collection is this Blu-Ray disc containing all 17 "Tijuana Toads" theatrical cartoons, released between 1969 and 1972. The number of theaters that still showed cartoons prior to the feature had severely declined by this time, but there was still enough of a market for these to be produced by the DePatie/Freling studio, made up of personnel from Warner Bros. after their animation studio was shuttered in the early 1960s. 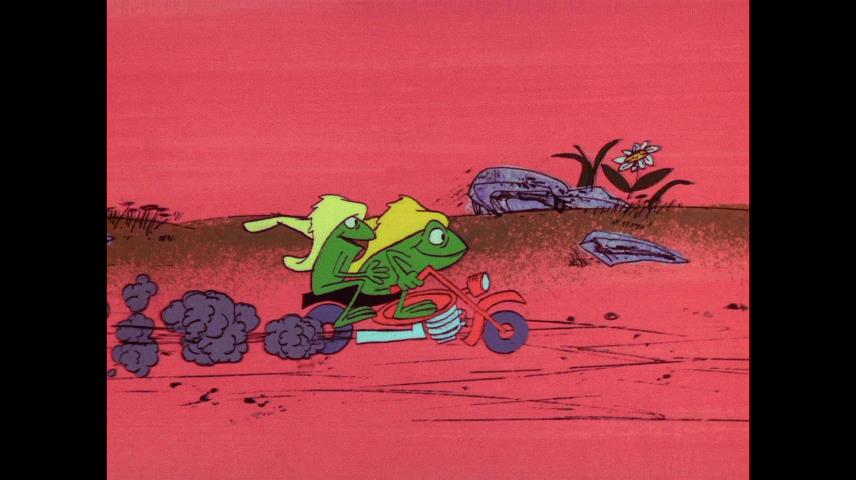 Like this studio's "Ant and the Aardvark" cartoons which were produced in the same time period, these are amusing although a bit short on plot and seem to be confined to a consistent running time (about six minutes and ten second) at which point things are quickly wrapped up. The two title characters here are the large Toro (voiced by Don Diamond) and the smaller, skinny Pancho (Tom Holland)- the disc's back cover acknowledges this as "the thin guy/fat guy formula for comedy" similar to Laurel and Hardy or Abbott and Costello (both of which had brief animated shorts featuring their likenesses.) With these two characters however they both seem to display the same relatively low levels of intelligence. Both of them also wear sombreros and speak in stereotypical Mexican accents, in English with a few random words in Spanish (one of them exclaims "He hit me in the cabeza" for example)- not exactly what you'd call "politically correct" nowadays but the characters aren't really made the subjects of ridicule for the way they speak. What's likely worse than that is the sometimes abusive relationship the two of them have, with Toro frequently punching Pancho for saying the wrong thing.

The situations of most of these shorts are quite simple- the two toads are hanging out in their habitat and have to catch something to eat- in the first cartoon they chase after a grasshopper, voiced by John Byner (the main voice in the "Ant and the Aardvark" shorts) doing a John Wayne impersonation who inevitably gets the best of them. Other times the two toads become the hunted as a dimwitted bird (who would later become Crazylegs Crane in his own series of cartoons, voiced in both instances by Larry D. Mann) tries to eat them for dinner, but they easily outsmart him and in a few instances even become friends. The settings range from simple to complex also, as sometimes they're just in the swamp but in one cartoon they've upgraded to a fully-furnished house. Some classic cartoon plots are re-used here, such as when the two stumble upon an alligator's egg which hatches and the baby alligator then thinks they're its parents- they hatch Crazylegs Crane who latches onto them the same way in another episode. A few other characters show up who also later got their own series of cartoons: the Blue Racer snake who talks with a lisp, and the Japanese Beetle (also voiced by Tom Holland) which was another not-so-politically-correct stereotype. They even run into a witch in one short but she ends up as just a one-off character there. There's plenty of traditional cartoon gags in these, some of which I remember my mom not wanting me to see- such as when explosives come into play leaving the characters a blackened mess, but after a brief fade-out they reappear in the next scene good as new.

Although the quality of the animation is a bit lower than the classic Warner Bros cartoons, owing to greatly reduced production budgets, they're still miles ahead of the cartoons produced for TV during that time, and as in DePatie/Freling's other cartoons of the era the backgrounds are often done in psychedelic watercolored patterns which are nice to look at. These cartoons eventually did make their way to Saturday morning TV in 1976 as part of the Pink Panther Show, but by then political correctness was enough of a concern for them to be re-named as the Texas Toads and the same voice actors re-recorded their dialogue this time doing stereotypical hillbilly voices, because I guess that stereotype is less offensive. One cartoon is repeated on this disc with the TV soundtrack, which also includes an added laugh track. 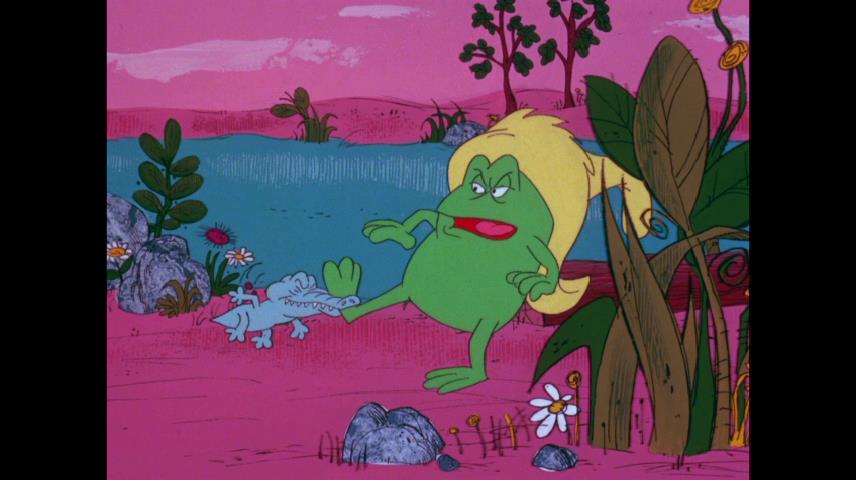 Presented in a 4x3 aspect ratio (despite 1.85 being the standard ratio for movies when these were released, although most theaters were still un-automated and could still manually show these and the feature in the proper formats), the elements used here are in top shape, with bright colors and no signs of wear. Onscreen you can see practically every brush stroke and pencil line, almost like looking at a moving painting as hand-drawn animation usually does in HD. The disc loses a few points however for having a bit too much compression, with some blockiness becoming visible during fade-outs. Having several cartoons encoded on the single-layer disc twice for commentary tracks and one alternate TV soundtrack, rather than simply encoding them once with two audio tracks, doesn't help matters. 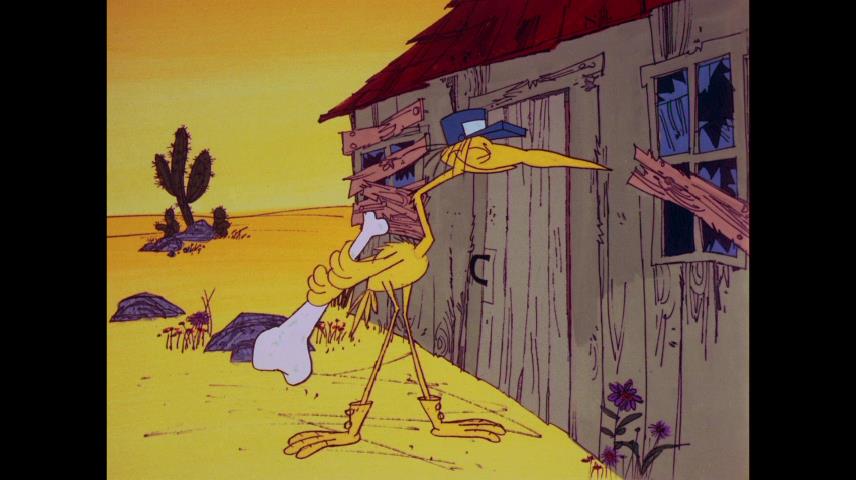 The mono audio mix is presented in 2-channel DTS Master Audio, and the disc tells my Oppo player to output this as a straight bitstream meaning that my Pioneer receiver will only play this through the front left and right speakers as a "phantom center" channel. Quality varies between cartoons, as some of them sound nearly pristine while a few others are a bit muddy, which is odd being matched with a very clean picture. 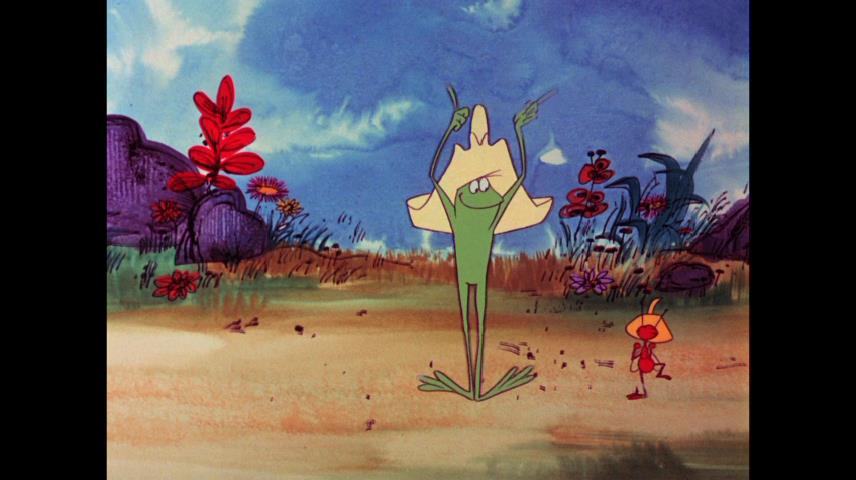 Two featurettes are included, and as with Kino's first wave these are also included on the "Roland and Rattfink" disc released at the same time. The first is "Odd Couples" which talks mainly about sidekick characters in the studio's cartoons. The second, "Music and Sound Mix-ologists" at a lengthy 23 minutes focuses on the music done for the studio's cartoons, though not mentioning the Tijuana Toads shorts. (The music used in these is Tijuana Brass style, similar to some of the music in the Ant and the Aardvark cartoons.)

The "Go for Croak" short is repeated with the TV "Texas Toads" soundtrack, where the somewhat politically-incorrect Tijuana stereotypes are replaced with Texas stereotypes which may or may not be as offensive. A laugh track has also been added here. Six more cartoons are repeated with audio commentaries- two with Mark Arnold (author of the book "Think Pink! The DePatie-Freling Story"), two with animator Greg Ford, and the rest with author/historian Jerry Beck and "Courage the Cowardly Dog" writer William Hohauser. As with previous discs in this series, there is a lot of overlapping information (mainly about the re-naming of the characters for TV) but they also point out several call-backs to older cartoons as well as details in the animation. 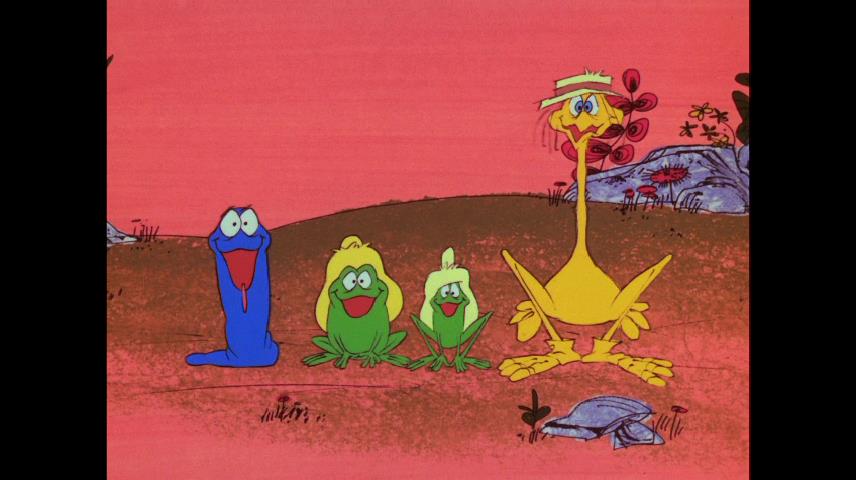 This is certainly an enjoyable companion piece to the other entries in the DePatie/Freling Collection. As with the others, the cartoons here aren't quite substantial enough to sustain watching them all at once- it's a bit like reading 100 or so pages of slightly-funny but not quite brilliant newspaper cartoons. Still, each of these cartoons is quite entertaining on its own, and fans will appreciate the bright and clean masters used on this disc.