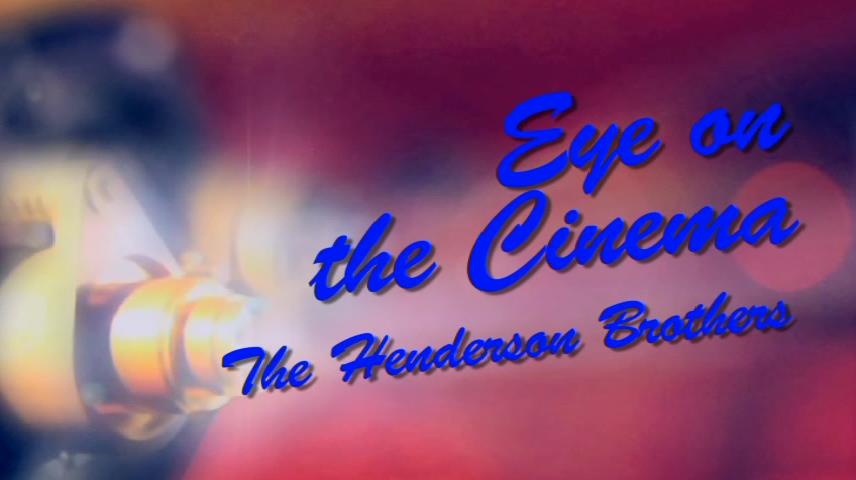 It's always fun to see straight-faced depictions of made-up things which are just plain ridiculous. That's exactly what we get in "Winners Tape All: The Henderson Brothers Story". The setting is a local show called "Eye on the Cinema" on a public TV station in Smithville, West Virginia, where film enthusiast Henry Jacoby (Chris LaMartina, writer and director of the famous "WNUF Halloween Special" which I still need to see) appears to show his appreciation of two of the greatest movies he's ever seen and the step-brothers who made them. On camera he tells how he frequently rented VHS tapes, and at one store stumbled upon a movie called "The Curse of Stabberman"- reading the back cover he was surprised to see that it was made right there in the town of Smithville. Next to it on the shelf was "Cannibal Swim Club", from the same filmmakers, so he rented them both and had the greatest cinematic experience of his life. The next day when he went to return the tapes he found the store boarded up and closed for good (without even a drop box) so the tapes were his to keep, and ever since then he's been showing them to everyone he meets and singing the praises of writers-directors-stars Michael and Richard Henderson (Zane Crosby and Josh Lively). 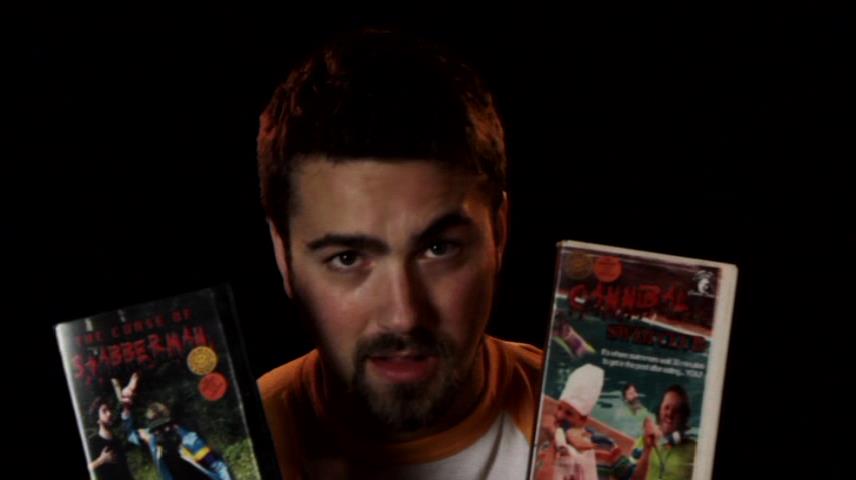 "Eye on the Cinema" then brings Michael and Richard themselves on camera for their first ever interview. They tell how they became step-brothers after their divorced parents remarried, and found that they both shared a love for horror movies and filmmaking. They made a few homemade films as kids, but then founded their own company called Cameo Video and in 1986 released "The Curse of Stabberman." Quite a few scenes of this masterpiece are shown, where the brothers starred along with two girls (one of which was Richard's co-worker at Waffle House) as just some normal people out on an innocent hiking trip until they run into a serial killer. They give us a bit of a commentary on the film, admitting that it doesn't look quite as good to them now as it did when they had first released it. They then discuss and show scenes from the follow-up movie made in 1987, "Cannibal Swim Club." This one has a bit more elaborate plot than "Stabberman" but is also a very terrible film- reminding me of a few real horror movies I'd rented back in the ‘80s based on the covers which turned out to be incredible bores. Essentially this one is about a swim club where people die in the pool and later end up in the cafeteria's food- but as the brothers explain many things went wrong during production. They had planned to shoot at a real swimming club with a huge pool and everything, but the deal fell through at the last minute and they were forced instead to use a friend's much smaller backyard pool. On top of that, it ended up raining that day but time constraints forced them to carry on and work that into the movie.

What makes "Winners Tape All" work is that despite how laughably bad these movies look from what we see of them, Chris LaMartina as film lover Henry Jacoby never lets up in his admiration of the Henderson Brothers as true filmmaking geniuses and their two movies as pure works of art (which I know from experience is much harder to do visually than through written form). What we see of the two films shows that a bit of effort was put into them- while they of course are intentionally bad, they also appear to be serious attempts at filmmaking. "Stabberman" is rather simple but nails most of the slasher-movie conventions, with characters asking "What was that?" and unwisely wandering off alone never to be seen alive again. "Swim Club"'s awfulness is what ultimately makes it funny, though it's also acknowledged as a failure that put the brothers' further film careers on hold. Of course one common criticism I have of most productions about fictitious movies is that they devote a bit too much time to clips from those movies (the famous Star Wars parody "Hardware Wars" for example was done as a movie trailer yet ran about 20 minutes, with the trailer format being an excuse to not film literally the entire thing which would have taken much longer.) Here they do provide a happy medium between not showing enough from these movies and actually making them as full-length parody films, which the filmmakers likely didn't have the resources to do and likely would have ended up wearing out their welcome. As it is "Winner Tapes All" runs just over one hour altogether which seems just right to get the joke across without beating us over the head with it. 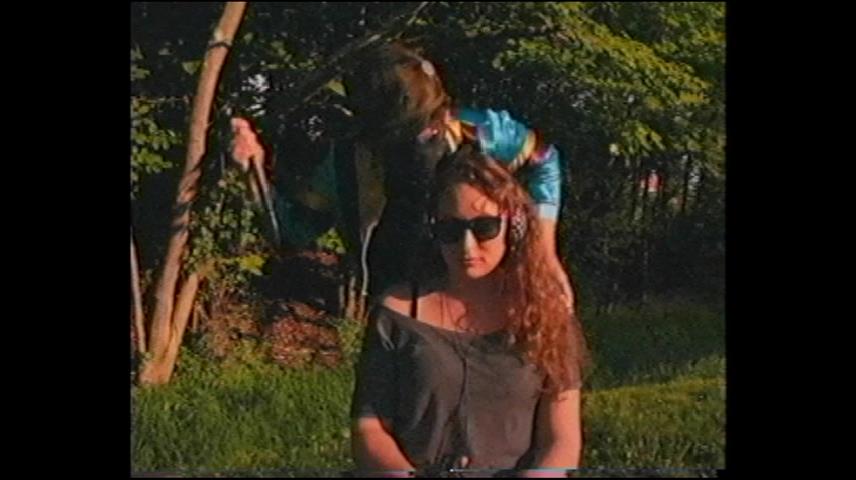 Shot on digital video at 24 frames per second, the picture quality isn't spectacular but fits in with the material quite well. The picture on the DVD does look a bit compressed, which might be at least partially inherent in the source material (a Blu-Ray disc is also available, funny enough packaged as a "deluxe edition" which also includes a VHS tape!) While the surrounding show is in 16x9, the clips from the "movies" are processed to look like they were taken from VHS tapes, complete with a head-switching line at the bottom of the screen- the aspect ratio on these clips is just a bit narrow however, appearing at about 4x2.5 than 4x3. 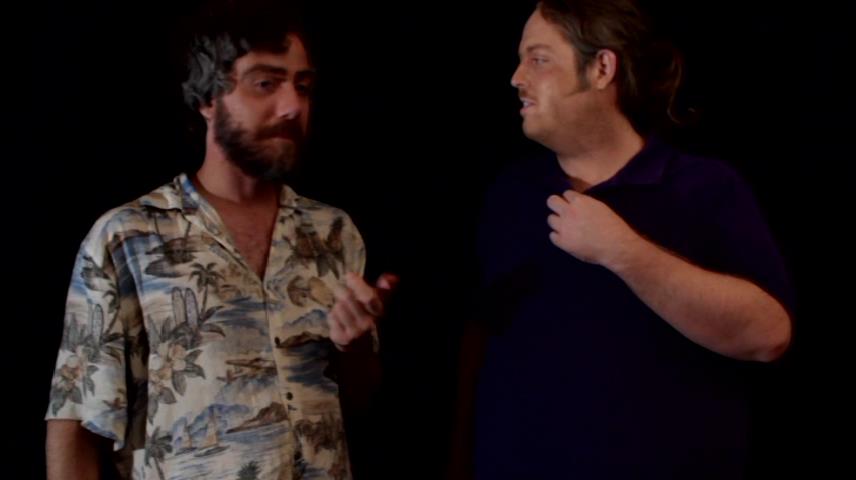 The 2-channel Dolby Digital track likewise isn't anything to write home about either but also suits the material fine- the dialogue is actually well-recorded all things considered (both of the fake movies could have easily been drowned out with ambient noise at the shooting locations, and doing so would have worked as an intentional gag, but dialogue is easily understandable in both of them.) Most of the audio stays centered with stereo separation on the theme music both in the show and featured movies. 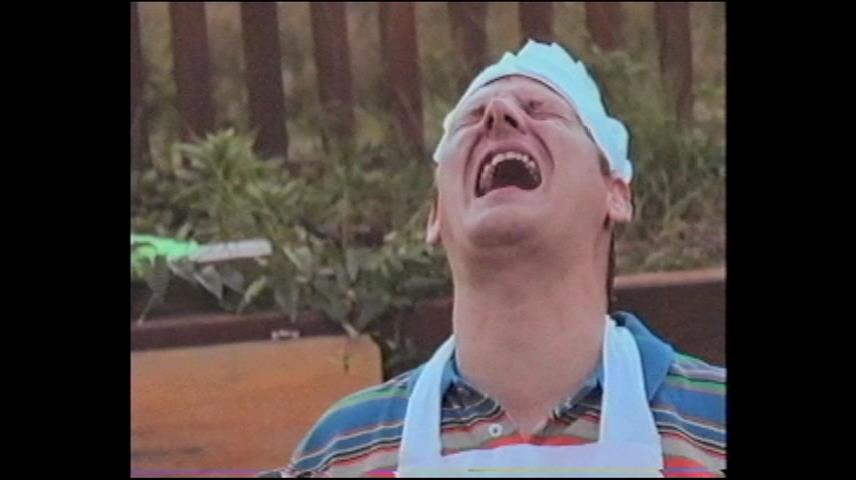 If the short running time leaves you wanting more, the DVD includes enough that takes the entire viewing time closer to two hours. "Restoration Demos" of both "The Curse of Stabberman" and "Cannibal Swim Club" are actually complete presentations of most of the scenes that were shot for these in 16x9- in the show Henry mentions that he has secured the original film elements for both and is working on putting them out on Blu-Ray. 18 minutes of "Interview Outtakes" shows some bits that were cut from the final product for pacing, and the trailer as seen online is also included.

The disc also includes two commentary tracks- the first one is a continuation of the joke with director Justin Channell as himself but Zane Crosby staying in character as Michael Henderson. They comment on everything as if it actually happened, and Crosby gets some pretty good laughs as he keeps his character as being not too bright, and claiming that he invented audio commentaries as he often goes to the theater and talks loud during the movie. The second, which is acknowledged as being "hidden" given that there is no menu option for it, you have to select it with the player's Audio button, has the two of them finally crossed over back into the real world where they talk about the actual production and the ideas behind it. 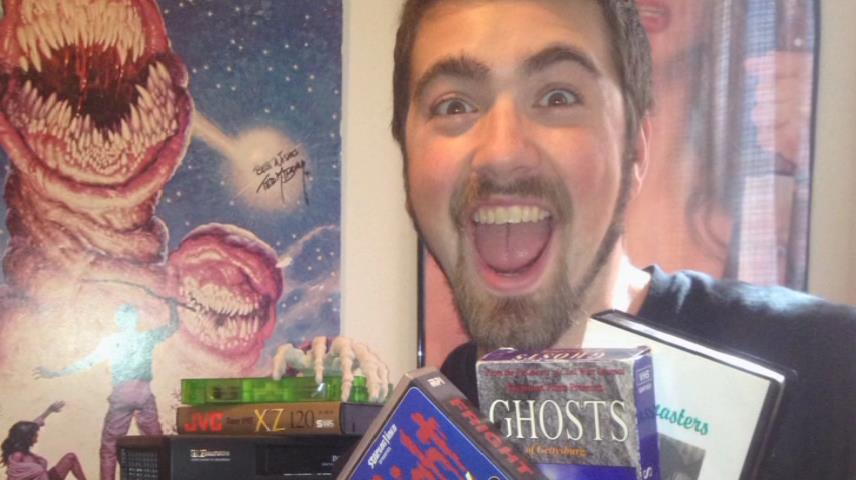 "Winners Tape All" will no doubt work for many as a nostalgia trip to the pre-Netflix era, when you would browse rental stores for hours and sometimes take chances on the lesser-known titles not knowing until you got home whether you picked a hidden gem or an outright dud. While the two fictitious movies featured here are certainly the latter, you still can't help but enjoy their awfulness as they're being praised as overlooked masterpieces with the determination to properly restore and reissue them for new generations to discover. The format used here ultimately takes less of the viewer's and filmmakers' time as full-length productions of these two movies would have, but time will tell if reaction to this prompts those to be made later. 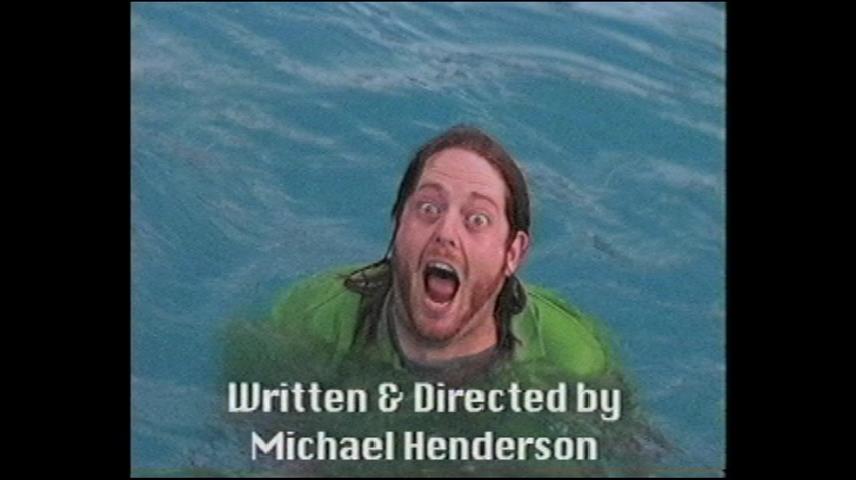