Just in time for Mothers' Day, Time-Life brings us a DVD of three Bob Hope USO Christmas tours- two during the Vietnam War in 1969 and 1970 (but broadcast the following January rather than waiting until next Christmas), and one in 1951 during the Korean War. The single disc is labeled "Disc 1" and is from a larger set with the same name- Time Life seems to like putting out the first discs of many sets separately like this for those who want to test the waters, though that means ending up with an extra if you decide to buy the whole set later. 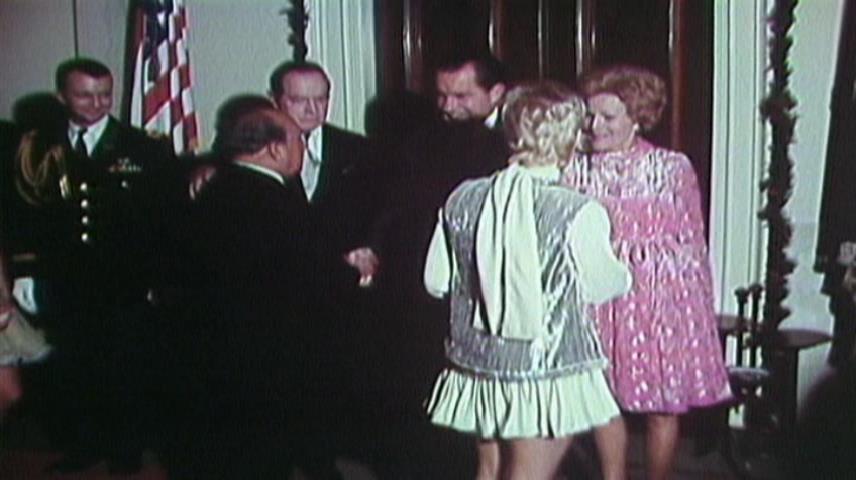 The first show on the disc is "The Bob Hope Christmas Special: Around the World With the USO" which aired on NBC in January 1970 after taking place the previous month. Hope narrates most of it with a voiceover as he shows us the places his group, backed by Les Brown and his Band of Renown, visited and entertained at for the Christmas season. They first performed a "dress rehearsal" at the White House for President Nixon (on the same stage where the Ray Conniff Singers would later perform with one breaking out into an anti-war protest.) Afterwards they take to the air and head for Germany, where Bob is joined onstage by film star Romy Schneider in a comedy bit where she good-naturedly leads him into self-deprecating remarks and asks him what he thinks of sex in the theatre to which he replies "It's OK if the usher doesn't catch you." A Christmas morning show at Camp Eagle in Vietnam has Connie Stevens do a rather comical rendition of "Wedding Bell Blues" where she asks a number of men named Bill (as in the song) to come up on stage with her, and Neil Armstrong, the first man to set foot on the moon, also appears and takes questions from the troops about what his trip was like, assuring the few women in the audience that he thinks women will eventually have a chance to go into space. Amazingly the show included a question from one not-so-festive soldier who asks why it seems the US in general cares more about the moon than the conflict in Vietnam, and Armstrong stammers a bit in his answer (and it seems some editing was done) but assures him the goal of the mission was to promote peace on Earth. 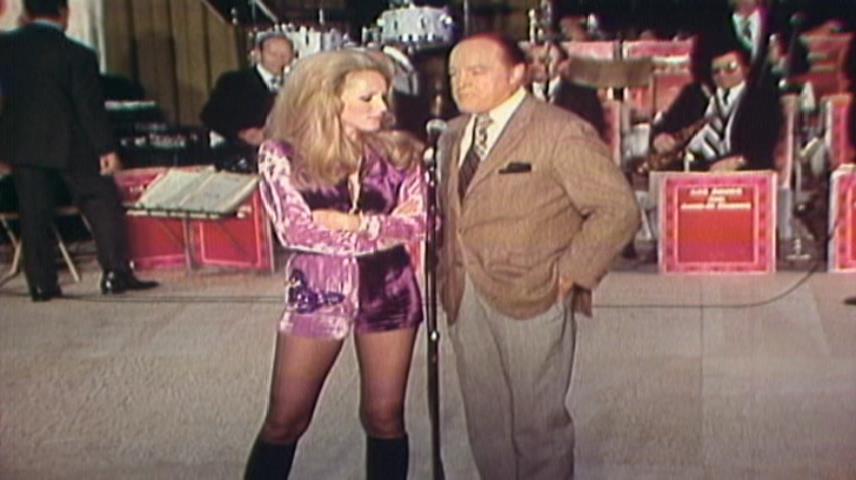 The following year's Christmas Special titled "Around the Globe With the USO" and also shown in mid-January has Hope and company traveling a slightly different route, including a stop in Germany with Ursula Andress (quite a sight for the 99% male audience) causing Bob to give a few double-entendres that I'm a bit surprised were allowed on prime time back then (when she asks which of her movies he's seen, he says "there isn't a thing of yours I haven't seen- I mean I've looked at everything they've ever shown of you- I gotta find a better place for my foot!") Later baseball star Johnny Bench joins Bob in singing "The Game" from "Damn Yankees," and on Christmas morning an outdoor show is again given in Vietnam during 100-degree weather followed by a show in Korea that night where it was literally freezing. Unfortunately it seems most of the musical numbers in this special were cut due to some Scrooge not willing to settle the song clearance issues- it aired in a 90-minute slot and running about 58 minutes on disc, there would have been at least 15 more minutes of content not including commercial breaks. 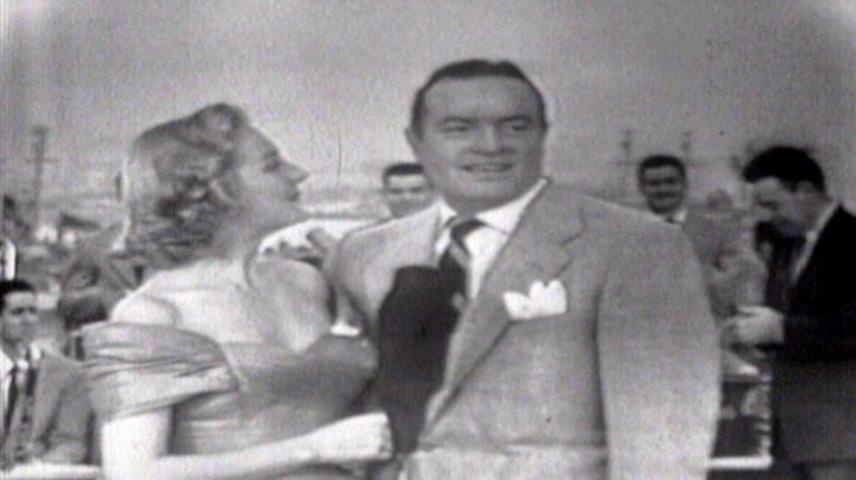 Lastly we get a Christmas show that was actually broadcast two days before Christmas in 1951, "Chesterfield Sound Off Time" live from aircraft carrier USS Boxer that had just returned to the US from Korea. Bob is joined by Connie Moore singing "I Wanna Go Home With You" before a comedy skit where he joins the military, which goes on a bit too long and doesn't really go anywhere though the audience laughs enough at it. 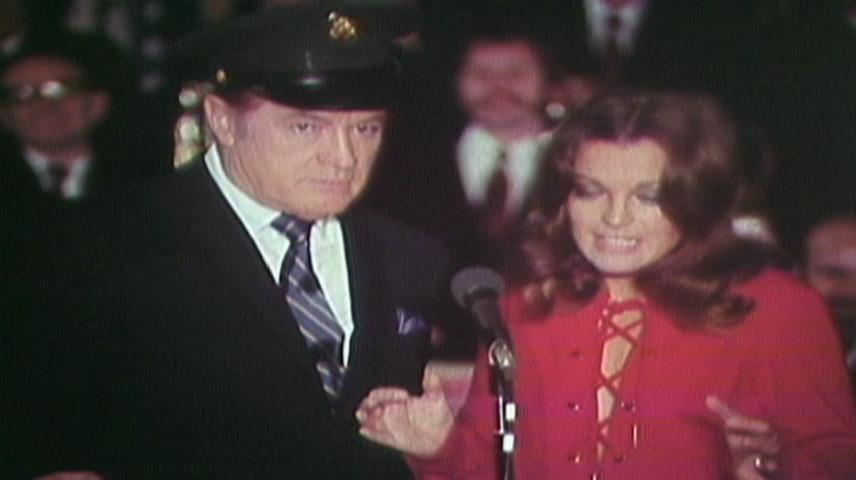 The first two specials were shot on 16mm film, and appear to be taken from the network videotape masters as there is some tell-tale chroma noise on the reds and a few slight analog video glitches. While the color is a bit faded and the film is dirty in parts, this is how it looked during its original broadcast. It wasn't uncommon for film to be actually run through a film chain live on TV in those days, and in some off-air recordings I've seen from that period it's amusing to see just how bad the quality of that often was- something shot that day could look old and beat-up by the time it made it to air. The first special's film transfer from that time appears jittery and has a lot of what those who've worked with film know as "shutter ghosting", where whites appear to streak. The second special looks a little better. The third show from 1951 is a black and white kinescope (essentially shooting 16mm film from a video monitor during the live broadcast, as videotape hadn't yet been invented) and isn't too pretty although the film itself is in decent shape. You can almost get a feel for how good the live broadcast must have looked watching it live on a TV from that era, and what a job it must have been to bring those big TV cameras aboard the aircraft carrier. Unfortunately Time-Life's DVD shows compression artifacts throughout- and the sections with film and/or tape damage seem to show off the compression the most. 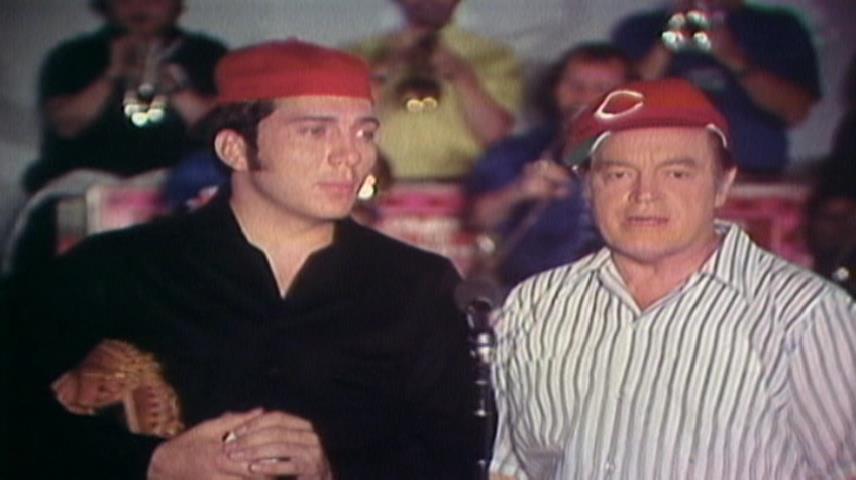 Sound was never a big priority for TV before the 1980s; network audio was even sent to affiliates through phone lines until about 1978. The first two specials have quality comparable to most other material transferred from 16mm film, and the third show has a bit of background noise as well though it's at least still listenable. Audio on the DVD is encoded in 2-channel Dolby Digital and remains centered in Pro-Logic mode.

All three shows include standard closed-captions. 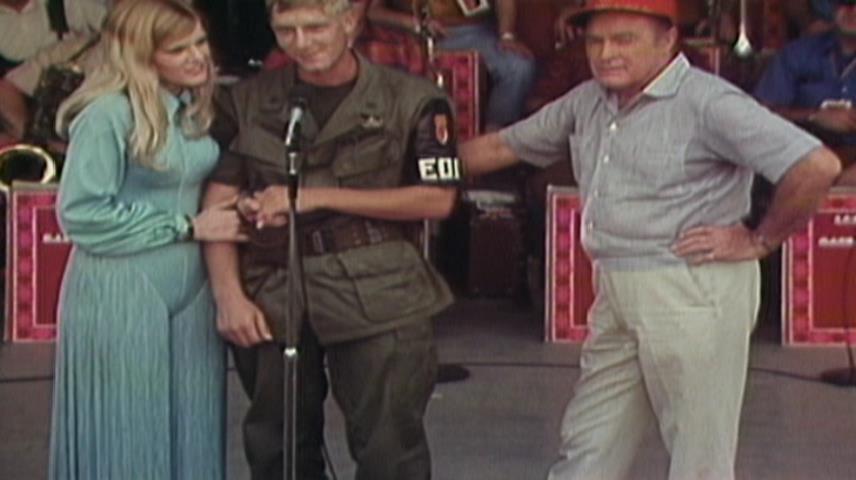 Bob Hope was an icon of early television and his time spent entertaining the US military outside the country earned him honorary Armed Forces Veteran status in 1997. The shows presented on this disc give one just a taste of his USO performances; I'm curious now as to what is included in the larger multi-disc set. The overcompressed video and edits on the disc are a let-down but nonetheless I'll give it a Recommended rating more for its historical value than entertainment.