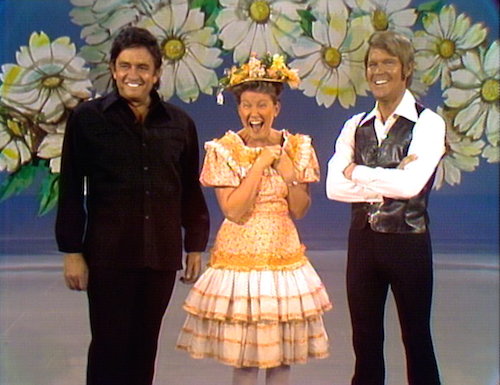 Shout! Factory just released its second DVD pulled from Glen Campbell's 1969-1972 TV variety show, after last year's Christmas Specials disc. Titled The Glen Campbell Goodtime Hour: Country Special, it's surely a treat for fans of classic country music. Originally aired on January 11, 1972, this episode is packed to the gills with stars, which makes for a briskly paced show with little in the way of musical filler. The Hee Haw-style comic interludes, however, are usually less successful -- but fortunately, they're short.

Campbell is a clean-cut, charming presence throughout, with a smooth voice to sell whatever song he's singing. He opens and closes the hour with a few solo performances, and then joins in with his guests for more music and comedy sketches. He duets with Johnny Cash on "Folsom Prison Blues," with Merle Haggard on "Carolyn," and with Jerry Reed on "Born to Lose." He also finds himself goofily pursued by Hee Haw cut-up Minnie Pearl, gets stuck playing straight man to Mel Tillis, whose speech impediment is played for fairly clever laughs, and also indulges in some "Pickin' and Grinnin'" with Buck Owens.

Most of the guests also get a solo song to themselves. Johnny Cash sings a straightfaced Jerry Reed number, "A Thing Called Love," and then brings up his wife June Carter for a fun rendition of their single "No Need to Worry." Reed himself goes for giggles during his solo spot with the nicotine addict's lament, "Another Puff." Buck Owens and his Buckaroos perform a lovely ballad, "I'll Still Be Waiting For You." Freddie Hart offers his breakout no. 1 hit "Easy Loving," although oddly, he is the only performer in the episode who is clearly lip-syncing. Well, show regulars The Mike Curb Congregation lip-sync too, but their white-bread version of Hank Williams's "I Saw the Light" is mostly just backdrop for some supremely kitschy dance choreography. Merle Haggard nearly steals the show with his spot-on impersonations of fellow guests Buck Owens and Johnny Cash, as well as a few other country legends.

At the end of the show, the whole cast gets together to sing a hits medley, including Minnie Pearl, whose less-than-mellifluous contribution to "Oh Lonesome Me" makes her stage-mates cringe. But in a funny way.

This Country Special is not too flashy, not too silly, and it serves up plenty of good music. Of course, it would have been nice to have another episode or two on the disc along with it but, setting that grumble aside, this little ol' hour has much to recommend it. So I do. 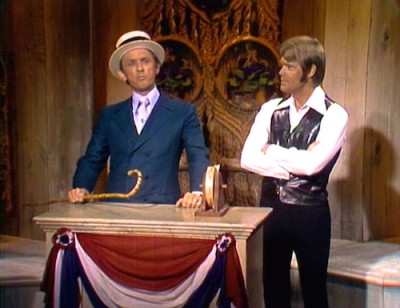 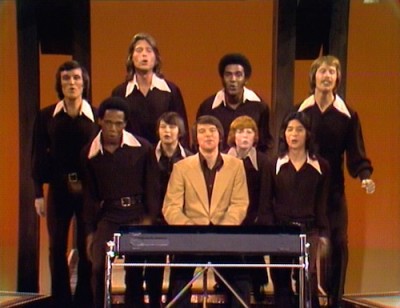 The Video:
For a nearly 45-year-old video-shot show, this standard 1.33:1 presentation looks pretty darn good. Colors are vibrant without blowing out. The level of detail is not strong, but it's not a smeary mess either. A few dropout lines here and there, but the image is stable for the most part. No noticeable compression artifacts either.

The Audio:
The Dolby 2.0 mono audio track is also quite good, with no annoying hiss (except for a touch during the lip-sync songs, naturally) and surprisingly high fidelity. One quibble: when June Carter sings, her mic seems a little hot, but I probably wouldn't have even noticed that if I wasn't listening to the show with headphones. No subtitles.

Final Thoughts:
Despite the no-frills presentation of the DVD, this special is an extremely entertaining look back at '70s country music with some of the all-time greats. Recommended. 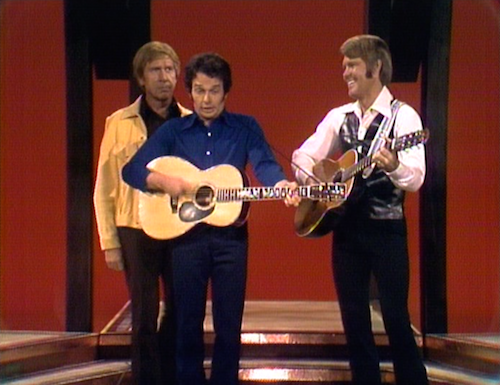