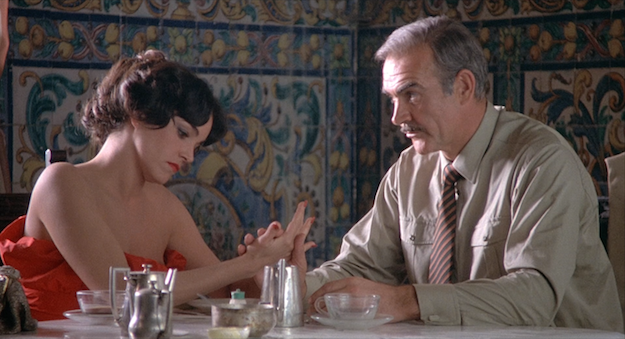 In the 1999 book Getting Away With It, director Richard Lester tells Steven Soderbergh that the reason he thinks the 1979 film Cuba doesn't work is that Lester and his frequent screenwriter Charles Wood focused on nailing down small ambient details, to properly evoke 1959 Cuba just before Castro and the Fidelistas took over, but they forgot to put as much energy into molding the actual story and main characters. Lester is being a little too harsh, because for the most part, Cuba is a compelling historical romance that benefits greatly from the flavorful, almost Altman-esque tapestry of supporting characters and manufactured local flavor (the film was actually shot in Spain) that fills up every frame. Admittedly, Cuba fails to stick the landing, but there's much to enjoy before the arrival of the flick's muddled third act.

British mercenary Robert Dapes (Sean Connery) is being courted by the Batista government's General Bello (Martin Balsam) to help put down the growing insurgency supportive of Fidel Castro's revolution. Dapes bluntly tells Bello that he has been sent for too late, and that most Cubans probably support the insurgents. Nonetheless, being a principled professional, Dapes allows the men who hired him to show him around. A relatively fresh-faced Hector Elizondo plays the army captain who acts as Dapes's driver and seems to relate to him, as a fellow soldier. Along the way, Dapes witnesses the corruption and brutality inherent in the Cuban troops (one soldier makes a necklace of ears cut from dead revolutionaries) and sees little room to right this ship.

Meanwhile, Dapes realizes that a lover of his from 15 years ago, Alexandra (Brooke Adams), is in Havana. (In an amusing acknowledgment of the age difference between Connery and Adams, Alexandra reminds Dapes at one point that they fell in love with she was 15. The film, however, has no good explanation for why so many white actors have simply been tanned to play Cubans.) In the intervening years, Alexandra has married the profligate Juan Pulido (Chris Sarandon) and has become the manager of his wealthy father's cigar factory. Alexandra is initially resistant to meeting with Dapes again, because she has become comfortable in her imperfect life. Eventually she allows herself to connect with him again, but the film never portrays their romance as a world-changing, once-in-a-lifetime thing. Maybe this would be a drawback in a typical film of this sort, but the low-key realism works better than when the film feels the need to amp up the melodrama.

Which brings us to that muddled third act. Inevitably, the revolutionaries take control and the characters' stories essentially recede in favor of some ground combat and scenes of tanks blowing stuff up. For some reason, the film splits Connery up from his love interest and has him try to escape from the revolutionaries with slobby American profiteer Jack Weston (one imagines Lester would have loved to have cast Roy Kinnear in this role, if only Kinnear could somehow have passed as an American). Connery's character is simultaneously being hunted by an idealistic student (Danny De La Paz), in one of many plot threads that don't totally pay off. Lester and screenwriter Wood do manage to put a button on the storylines of most of the characters, but true to Lester's observation about his focus being too much on the background and not on the fore, the fate of a tangential crooked policeman ends up being more eloquently dramatized than that of Adams's character.

Even with these flaws, Cuba succeeds as an entertaining anti-epic epic. Connery and Adams don't make the most convincing couple, but they are both exceedingly well-suited to their roles otherwise. The sprawling supporting cast, which also includes Denholm Elliott as an opportunistic British pilot and The Last American Virgin's Louisa Moritz as an underwhelming burlesque artist, is also a uniform delight. 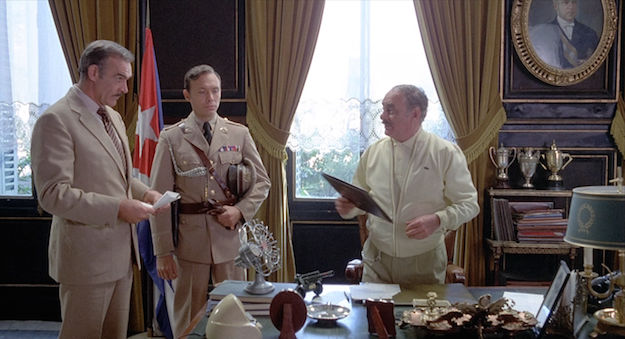 The Video:
Despite fairly consistent speckling, the AVC-encoded 1080p 1.85:1 presentation is pleasingly strong. The film grain structure is tight but discernible; detail is satisfyingly crisp; colors are vivid without looking overdone. There is a little bit of digital noise, but the more significant drawback is that this kind of film is begging for the density of a higher bitrate encode; instead Kino Lorber, as usual, has only budgeted space for a standard single-layer disc.

The Audio:
In the same way that Lester has layered every frame with colorful atmosphere, the DTS-HD MA 2.0 mono audio track is similarly layered with ambience and music. Some re-dubbed lines of dialogue have an unconvincing phoniness about them (the accented voice coming out of the mouth of Time Bandits' David Rappaport feels particularly mismatched), but it's mostly an engaging and transportive mix. No significant complaints about the digital rendering of the soundtrack either.

Special Features:
Just trailers -- for this film, plus The Great Train Robbery, Juggernaut, The Offence, and Meteor.

Final Thoughts:
An underrated effort from director Richard Lester that is highly worthy of reappraisal. Lester has assembled a tremendous (not exactly Cuban) cast, led by Sean Connery and Brooke Adams, and has created a unique ambience unlike that of any other historical romance. The multi-tasking Lester -- who was also prepping his portion of Superman II while shooting this -- loses his grip on the plot, and it all peters out in the end, but I suggest new viewers not allow this aspect to detract from their overall enjoyment. Recommended. 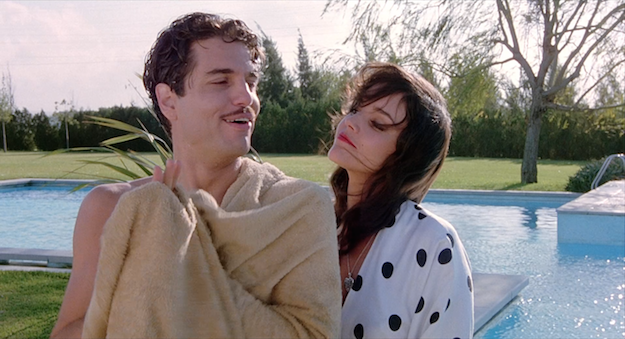