One of the most tragic aspects of war is that it turns innocent children into bitter warriors far too quickly. Theeb (Jacir Eid Al-Hwietat) is one of those children. Living as a Bedouin in the Ottoman Empire-controlled Hijaz province with his protective big brother Hussein (Hussein Salameh Al-Sweilhiyeen) during the First World War, Theeb is a doe-eyed little boy; infinitely curious about the world that surrounds him, even if that world is a desolate desert. 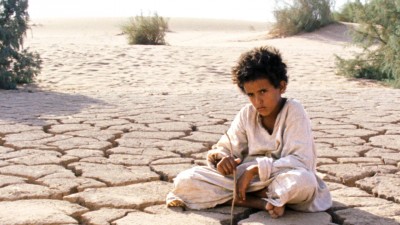 When a British officer (Jack Fox) and his Bedouin companion ask Hussein to take them to the railroad, presumably to strike a blow to an Ottoman train, Theeb tags along despite everyone's protest, in search of what he thinks will be an exciting adventure. At the beginning of Theeb, co-writer/director Naji Abu Nowar's excellent and haunting adventure/coming-of-age story, the title character has an appropriately boyish outlook on war. He idolizes the British soldier and looks at him as a stoic hero who kills bad guys. "How many men have you killed?" is the first thing he says to the officer.

His eyes come alive with anticipation as he follows a mysterious military box that the officer drags with him. He develops an obsession with the box, compulsively touching it, even though the officer is adamant about anyone, especially the boy, staying away from his precious cargo. During the first act of Theeb, the box represents an exciting piece of military equipment to the boy, but when a horrible tragedy strikes and Theeb is left in the middle of the desert to fend for himself, his bitter experience significantly alters his outlook on war. By the time we revisit the mysterious box at the end, it has turned into a destructive force in more ways than one.

In order to survive the desert, Theeb has to depend on an enemy soldier (Hassan Mutlag Al-Maraiyeh) who seems to go out of his way to protect him. This might be due to the soldier's guilt about a horrible thing he did to Theeb's family. As a bond begins to form between Theeb and the soldier, we expect a more Western-style conclusion, a saccharine message about friendship transcending the animosity of war. However, in war, children are forced to become grown-ups really, really fast, which includes making choices that might haunt you for the rest of your life.

Audiences looking for a more convenient conclusion might judge Theeb's actions during the third act, and might turn on a character they found to be sympathetic all along. Yet if you let Theeb's somber and honest tone wash over you, you'll understand that its ending was the only logical conclusion.

I was pleasantly surprised to find out that Theeb was Naji Abu Nowar's debut feature. With exquisite framing and pacing, natural performances from non-professionals, and a deft command on themes and tone, this looks like the work of a seasoned professional. The grand vista shots of the desert make the story look and feel like a Western. In fact, the story could have easily revolved around the American Civil War with minor changes, thanks to the universal themes it carries.

Due to its desert locations, Theeb is a film awash in hypnotic grays and browns. This is an adventure that looks beautiful enough to compete with some of the classic westerns of epic old-school Hollywood. The 1080p transfer looks stunning, and presents incredible clarity without any color bleeding.

Theeb supports a fairly subtle audio mix that depends on the ambient sounds of the desert. In that sense, the DTS-HD 5.1 track is essential in getting the full experience. The surround channels might not kick in until the central gunfight begins, but it's still a film I recommend experiencing through a surround system, mainly because of its solid ambient mix.

Waves ‘98: This is a beautiful short animated film about director Ely Dagher's experiences as a teenager living in Lebanon.

Audio Commentary: Director Naji Abu Nowar gives an English-language commentary on the film's production process, as well as interesting information on the Bedouin life. The main two actors in the film were not professionals, and are real Beouins.

We also get a ton of Trailers of other Film Movement releases.