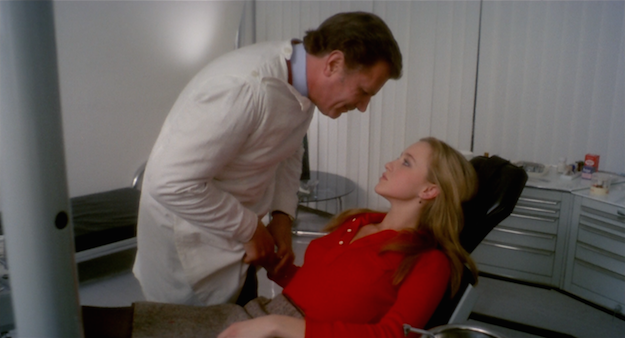 Considering the scantily-clad images of Ornella Muti adorning the front and back covers of Twilight Time's new Blu-ray of Appassionata, one could be forgiven for assuming this 1974 Italian export is just a trashy skin flick from the heyday of Euro softcore. The film does offer a handful of taboo-tweaking sex scenes -- relatively few compared to typical softcore fare -- but it spends far more time unspooling a twisted character study of an upper middle class family in trouble.

L'Avventura star Gabriele Ferzetti appears as middle-aged dentist Emilio, who starts re-assessing his life after his teenage daughter's best friend Nicola (Eleonora Giorgi) seduces him from his dentist chair. However, Nicola behaves with such detachment after the act that, in one of the film's scattered moments of humor, Emilio wonders if maybe she simply had a strange reaction to novacaine. At home, Emilio's wife Elisa (Valentina Cortese) is perpetually on the verge of a nervous breakdown, while constantly mourning a failed career as a concert pianist. Their daughter Eugenia (Muti) hates and antagonizes her mother, while using her nubile young body to flirt creepily with her father.

After setting up the basic dynamic of the characters, co-writer and director Gianluigi Calderone basically just lets them bounce off of each other for the next 100 minutes, which is both Appassionata's main strength and main weakness. The actors are given plenty of room to uncover their characters' dimensionality, but Calderone fails to provide much more than a horny atmosphere and loose narrative for those creations to inhabit. This half-thoughtful, half-tossed-off approach sometimes makes Appassionata feel like someone took a heartfelt drama about a woman suffering from mental illness and a plot-light Skinemax flick, and then just cross-cut them at random. It can leave the viewer feeling lost as to what this weird mash-up is supposed to be communicating, and the ambiguously amoral, highly prurient conclusion does little to solve this puzzlement.

For all the thematic confusion it creates, though, Appassionata is still oddly entertaining. Valentina Cortese, fresh off her Oscar-nominated turn in Day For Night, delivers the most interesting acting in the film. Whether she reports sadly about losing the spark in her marriage or carries on a comic argument with a butcher's boy about her misbehaving dog, Cortese gives Elisa more shading and color than this film probably deserves. Meanwhile, Ornella Muti is on the film poster (and Blu-ray cover) for good reason: her character's precocious sexuality and quietly calculated malevolence is consistently the crux of what little story this film has. Gabriele Ferzetti and Eleonora Giorgi are fine, but the film strangely gives their characters the least interesting stuff to do, even though their illicit love affair is ostensibly what drives the plot.

A few of the recent reviews of the Appassionata Blu-ray express a confusion over whom exactly this film is supposed to appeal to. I hate to fall into cliché, but I find myself asking the same question. If we are speaking quantitatively only, then the film checks the proper boxes both for someone looking for titillation or for someone seeking a genuine attempt at storytelling. Yet, qualitatively, both of these aspects are compromised by the existence of the other: there is too much story for this to work as a mindless nudie flick, and the sex is so porn-y and unbelievable that it undermines the integrity of the story. However, if this mix sounds intriguing, Appassionata is more than competently crafted and deserves a look. 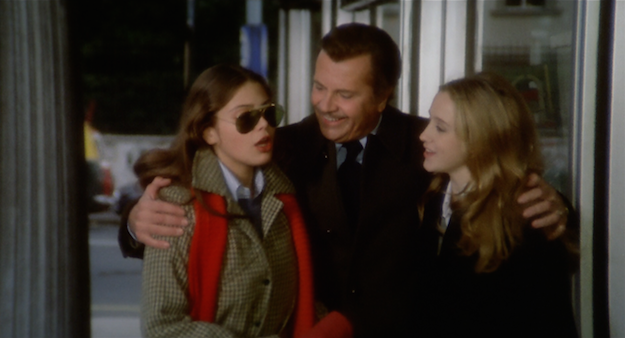 The Blu-ray
Appassionata is available in a limited edition of 3000 copies. The disc is packaged with a booklet including stills and a liner-note essay by Twilight Time's Julie Kirgo.

The Video:
It's a little difficult to accurately judge this disc's AVC-encoded 1080p 1.85:1 presentation since Appassionata is completely shot in a soft-focus haze. There might be a touch of DNR smoothing going on as well, but honestly there might not be. Detail is significant enough that you can tell you're looking at high-res and not standard, but the image never really coalesces into something particularly crisp. Color saturation and black levels fluctuate mildly from scene to scene as well, but it's an overall attractive transfer that seems to accurately translate the original look of the film. No noticeable film damage, dirt, or other major interference.

The Audio:
The disc offers two options: Italian DTS-HD MA 2.0 mono and English DTS-HD MA 2.0 mono. Thanks to Italian film production standards of the time, both tracks are technically dubs, so the dialogue has a disconnected quality either way. The Italian voices feel more natural though, and apart from an isolated phasing or compression issue in the first dialogue scene, it's the more satisfying choice overall. The disc offers optional English subtitles to go with the Italian dialogue, but it should be noted that they are dubtitles. I had my Italian roommate watch a portion of the film, and she said the subtitles were basically accurate. Even so, the dubtitles don't totally work out, because there are at least three moments in the film where the English dubbers didn't bother to put any words in the characters' mouths, but the Italians had. To cope with each of these gaps, the subtitle creators offer a completely unhelpful "???" where a translation should be.

Final Thoughts:
What a bizarre film. I don't think Appassionata contains enough sex to satisfy viewers looking for something hot and dirty, and it probably doesn't contain enough thoughtful drama to satisfy someone just looking for a good story. But it does have some sex. And it does have some interesting dramatic moments. If that's enough to pique your interest, I say: try it out. Mildly Recommended. 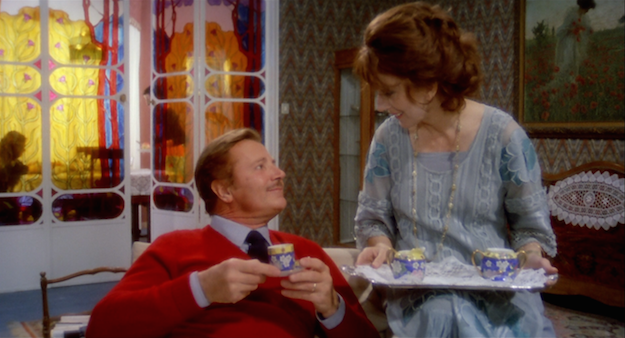