Lionsgate Home Entertainment // Unrated // June 14, 2016
List Price: $19.98 [Buy now and save at Amazon]
Review by Francis Rizzo III | posted June 19, 2016 | E-mail the Author
Note:
In the latest of a continuing series, my wife Nicole returns to offer her thoughts on another show I'm not likely to ever watch. 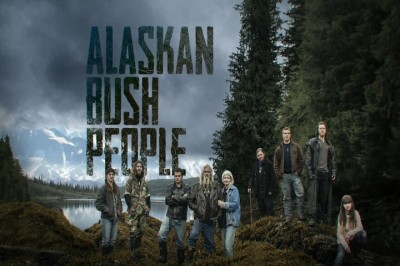 Reviewer's Bias*
Loves: Living a simple life, Ami and the Brown kids
Likes: Billy Brown, making do with what you have
Dislikes: No bonus features
Hates:


The Show
Starting a family and building a home together is the dream of most young couples. Building a home deep in the remote Alaskan bush and raising their seven children was and is still the dream for Ami and Billy Brown. Life is unpredictable and there are inevitable ups and downs along the way. The true test is how you handle the lemons life hands you from time to time. For Billy Brown, life has been overflowing with tragedy and struggle. At the tender age of sixteen, a devastating car crash claimed the lives of both his parents and sister. From that moment on, he made it his life's purpose to live each day to the fullest and by his own rules. In the blink of an eye, Brown went from living a life filled with expensive possessions to being homeless living out of the Camaro he received for his fifteenth birthday. Brown would work odd jobs all over the lower 48 for nearly a decade before his life and luck would change.

The change would come when Brown met Amora (Ami as she's known on the show) Branson. Over the course of their 30-odd year marriage, the Brown family grew by leaps and bounds, giving Billy the much needed "family" he so desperately yearned for. For the first time in many years, Brown found solace. He felt most secure living in the Alaskan bush where he could get back to nature and be as close as possible to the great outdoors. For some that sounds as if Billy and Ami were stepping back in time to where pioneers first laid claim to the United States.

Along with their growing brood, Billy and Ami made do with what they had, adapted well to living off the land and cohabiting with some of the world's most dangerous creatures. For the Browns, it is just part of life, a life they built with blood, sweat and tears. It was thought that a simpler life would be a better life. The family would be forced from their home in Ketchikan, North to the Copper River Valley as authorities claim their home was built on government property. With no other choice but to leave, Billy decides to pack up his family and search for safer and more secure homestead. As you'll see, the remote bush is made up of small, tight knit communities that aren't always willing to open their doors to cameras and television crews. For that reason, an unwelcomeness was felt from the get go causing the family (and Discovery production crew) to once again uproot, this time settling in the city of Juneau with only enough clothes and possessions as they could carry. For a family accustomed to living so remotely from others, living in such a congested city was unsettling and unnerving. The family would build a small savings doing odd jobs around the city eagerly awaiting their chance to go back to the bush. 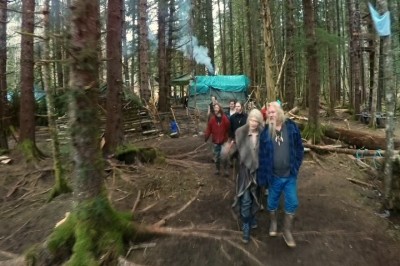 I felt it very necessary to delve deeper into what drives the family, providing for their nine children. So, here we go! Matt, the oldest of the Brown clan, is an outgoing, extremely personable person. It's not uncommon to see Matt and younger brother, Bam Bam (Joshua), argue from time to time, as Bam is a very stubborn, my-way-or-the-highway kind of person. Easing things and bringing distraction to uneasy situations is "wild child" and over-the-top extremist Bear. My favorite of the Brown sons is Gabe, a comedian at heart and the family workhorse. He is a gentle giant and the glue that brings his brothers together when things start going awry. Rounding out the Brown boys is the youngest and by far the most intelligent of the group, Noah. He is the family "MacGyver" when it comes to all things mechanical and can make almost anything from what he finds at the local junkyard. Browntown, as it is called by the family, is constantly growing and it's Noah's dream to put it on the revolutionary map. As for the girls of the family, Snowbird may be the second to youngest but she's more than capable of carrying her weight and then some. The youngest of the Brown family is Rain (Merry Christmas Raindrop), a true girly girl but as you'll see, she's really stepped up and delivered when it comes to being an active and productive member of the family.

To break up the straight documentation of their daily routine, Discovery supplies voice overs and talking head interviews to give the viewer a more indepth understanding of what went into filming this family. Hearing how their lives have changed and what it takes to move a family of nine through the Alaskan forest helps build a connection between the Browns and the viewers.

As you move into Season Two, the vision and necessity of "Browntown" becomes more apparent. Nothing is free in life and as we see, the Brown boys are jacks of all trades and aren't afraid to get dirt under their nails to help provide for the rest of the family. Whether it be hunting for the family supply of food, exchanging Christmas gifts or constructing an outhouse for the girls, the Browns do it with 110% of their hearts.

Daily tasks and chores for keeping their way of life going takes many hands and for the Browns, they are not short in that department as they have five boys and two girls. Each child has their own distinctive personality,, with some considered to be awkward or quirky to outrageous and strange. I actually find the Brown children fascinating. I personally wouldn't be able to survive 10 minutes in the wilderness let alone live there my whole life. My husband makes fun of me because my idea of "roughing it" is a hotel without a jacuzzi. But in all seriousness, I'm honestly in awe of how the family has adapted themselves to their living environment. 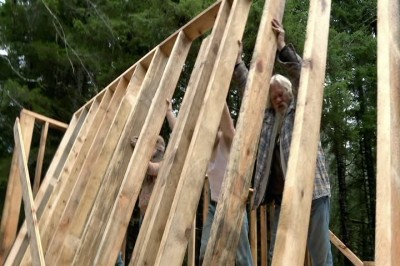 The DVDs
Shipped in a slipcover, the 14 episodes in this collection arrive on 3 DVDs in a standard keepcase with a dual-hubbed tray. The discs feature static anamorphic widescreen menus with options to play all or select a specific episode. There are no audio options, but closed captioning is available.

The Quality
The visual quality of this set is quite impressive as the crisp image and vivid colors help to accentuate the already gorgeous Alaskan landscape. The wide aerial shots are stunning with delicate details. There was nothing noticeably wrong with the video.

The Dolby Digital 2.0 tracks doesn't offer the same audio experience that the show's surround sound broadcast offers, but the presentation is good, with the dialogue sounding clear. You are offered the regular sounds produced by nature without any problems.

The Extras
Except for an Ultraviolet code to stream or download the first two seasons digitally, there are no extras or special features included in this set, which personally was a let down. I would have liked to have seen a featurette about what went into shooting the actual show as well as why the producers decided to document this particular way of life. 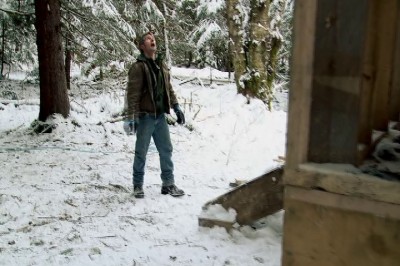 The Bottom Line
My husband makes fun of me because I am a sucker for a reality show. I honestly enjoy watching this Alaskan Bush People from week to week because I'm always curious to see how the Browns' faith and love carry them through the darkest of days. I found myself wondering why anyone in their right mind would subject themselves to those kinds of living situation or environmental dangers. For me, it comes down to the beauty and splendor of the Alaskan landscape. I'm a strong believer that you control your own destiny. Billy Brown and his family are true examples of that as they've risen many times from the ashes of disaster and come back swinging. I'm excited to see where Season Three leads the family and what adventures and tasks they'll have to tackle.