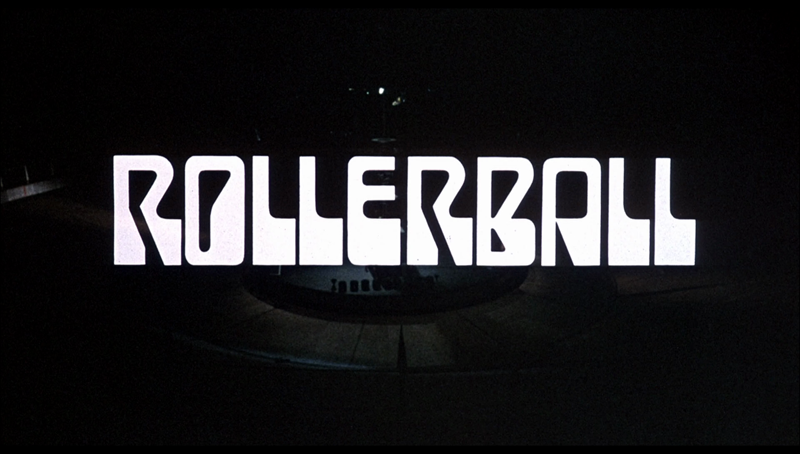 
The Movie
As America careens toward a loud, orange abyss, it becomes increasingly frightening that films have been so accurate at predicting our bleak future, with Idiocracy chief amongst them. And though Rollerball's vision of a world in which high-speed, violence-soaked, corporate-sponsored bread and circuses take the place of war hasn't come to fruition yet, it isn't too far off. Our ignorant, history-ignoring, MMA-loving, corporate-owned society just needs that final nudge to go over the top. Hopefully, if it does, we can find a hero like Jonathan E. to remind us of what we once were.

Jonathan (James Caan) is the greatest player in rollerball, a sport that combines roller derby, football and street brawling into something brutal and uber-popular. Rollerball teams are sponsored by corporations, which have taken the place of countries, and the games keep the people, who are provided for and controlled, an outlet for their basest instincts. Jonathan plays for Houston, which is sponsored by Energy (as in the energy industry), which is led by executive Bartholomew (John Houseman at his terrible rich-guy best.) Unfortunately for Jonathan, he's too good, and his individual success clashes with the game's goal of crushing the will of the people. Thus, they want him to retire, or they will retire him. 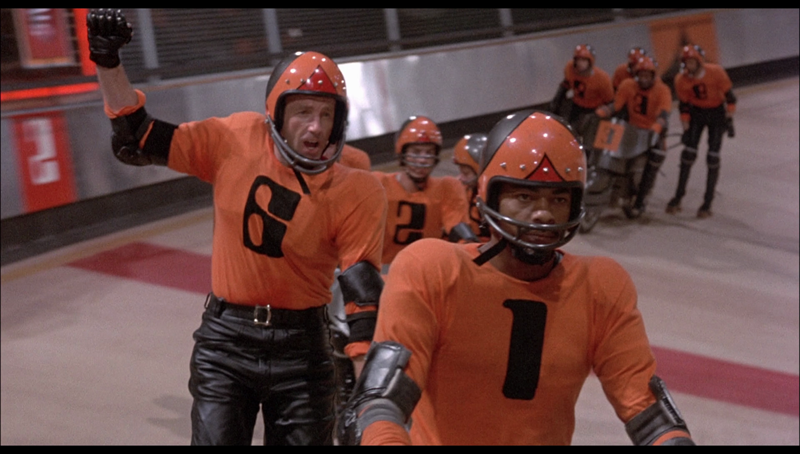 Directed by Norman Jewison (The Thomas Crown Affair, Jesus Christ Superstar), Rollerball mixes a thoughtful meditation on the ideas of individuality, corporate overreach and the dangers of technology with high-energy sports action. Right off the bat, the first fifteen minutes of the film are spent in the midst of a game, introducing the audience to this foreign concept, complete with its embrace of extreme violence, as athletes are brutally assaulted and left incapacitated. The film efficiently establishes rollerball's place in the world, and the main characters (including Jonathan's good time-loving teammate Moonpie [John Beck] and a rotating assortment of courtesans), before setting into a back-and-forth rhythm that alternates between Jonathan's battles on and off the field of play.

Though Caan's hero is great when he isn't wearing skates, bucking stereotypes by trying to track down an uncensored view of history in the face of a society that has limited access to knowledge and struggling to maintain his own course in the face of heartbreak and overwhelming odds, the game itself is the most memorable part of the film, thanks to some tremendous stunt work and action filmmaking. Shot as if the game is a real sport, the rollerball action is completely engrossing, though equally horrific, especially as the level of violence increases with each game, to the point where it just becomes organized, sanctioned murder. That the rising tide of the bloodsport is matched by the growing rage of those watching might be where the film is most prescient about the lust for violence in sports like the National Football League and the UFC (not to mention amongst some political parties.)

Though the film somewhat revels in the game of rollerball, an attempt--possibly misguided--to turn off audiences to the violence, it often allows a moment to linger, to solid effect, like the party scene, where an odd scene involving destructive, anti-arborist partygoers is intertwined with a conversation between Caan and Huseman to affecting effect. Touches like these, including a beautiful pan across a crying woman's face, butted up against the less-subtle elements in the film make for an uneasy feeling that is likely just what Jewison was going for in crafting this film. The complexity of this world and the complexity of Jonathan raise what could have been a simple genre film into something far more interesting (even if, at times, it can go off the rails, pulled off-course by the insanity of the characters.) 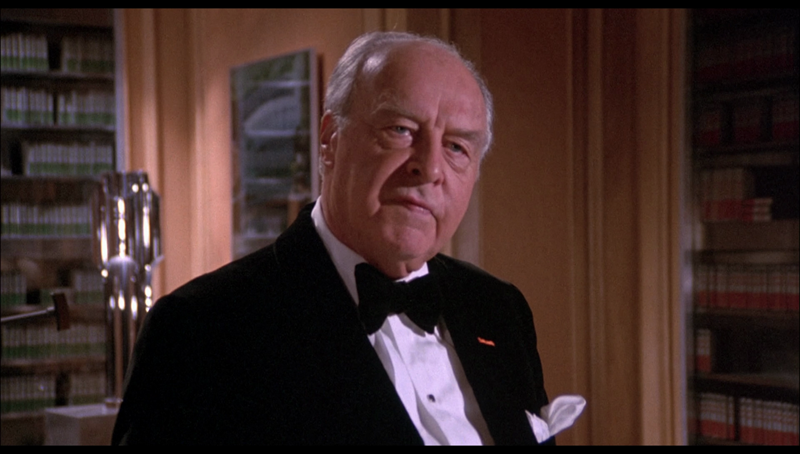 The Disc
Presented as part of Twilight Time's "Encore Edition" series (limited to 3,000 copies), this re-release of their sold-out 2014 Limited Edition version arrives in a clear Blu-ray keepcase (versus the original's blue) and sports a slightly different cover, which has a team photo on the reverse. The Blu-ray disc has a static menu with options to watch the film, select scenes, adjust the setup and check out the extras. Audio options include English 5.1 and 2.0 DTS-HD Master Audio tracks, while subtitles are available in English SDH.

The Quality
The 1.85:1, AVC-encoded 1080p transfer here is simply a re-pressing of the previous Twilight Time Blu-ray. That's not a problem, since it's a quality image, with good fine detail (you can really make out the abuse that steel ball takes), solid color (heavy on earth tones) and decent black levels. The outdoor scenes, of which there are few, aren't as nice as the rest though, as contrast isn't as high. Grain is consistent and strong across the board however, and digital distractions aren't an issue, though some specks of damage can be noticed here and there. Overall, it's a impressive looking disc for a film over 40 years old.

Viewers have their choice of the more faithful DTS-HD Master Audio 1.0 track or the more bombastic DTS-HD Master Audio 5.1 delivery. While there's nothing at all wrong with the mono audio, which sounds sufficiently strong and clear, and represents the filmmakers' original intent, it's hard to not go with the 5.1 mix on a film with so much action in it, especially since the track does a fine job of giving all the elements their proper focus, with the dialogue crisply handled center stage, while the surrounds give the film's classical score a deserving heft and fill the room with the sounds of the arena. There's nothing to be concerned about here, thanks to a tremendously complementary presentation.

The Extras
The extras here are carried over from previous non-Twilight Time releases of Rollerball (though the Arrow Films release has a few more that would have been great to see here.) Starting things off is a pair of audio commentaries, by Jewison and writer William Harrison, author of the short story the film is based on and screenwriter for the film. It's too bad they didn't get together to create a track, as then perhaps the dead air that permeates both tracks and the amount of time they spend describing what happens on-screen would have been reduced. Even so, they share a good deal of production info and trivia, with Harrison even throwing in some criticism of the final work (in relation to his vision for the story.) Between the two, you should learn everything you need to know about the film.

If there is anything missing, you'll likely find it in "Return to the Arena", a 25:04 featurette with interviews featuring Jewison, Harrison, Beck, editor Anthony Gibbs and stunt crew Walt Scott and Max Klevan. There's some overlap with the commentaries, but the additional voices make this a worthwhile addition to the backstory of the film.

For a more vintage look behind the scenes, "From Rome to Rollerball: The Full Circle" (7:53) is a classic peek at the making of the movie from 1975, offering on-set footage and interviews with Jewison and Caan, as well as discussion of the connection between the film's story and the Roman Coliseum. Even if just for curiosity's sake, such a rare piece of promotion is great to watch.

More promotional material is available in the form of two TV spots, one 26 seconds and one a scant 10 seconds, which serve mainly to remind you of what movie advertising on television was once like. There are also a pair of theatrical trailers (2:47 and :55) which get into the plot more (far more than necessary in that lengthy version.) The first smart marketer who mimics this style of trailer for a modern film will make quite the impact.

Also available to watch is the MGM 90th Anniversary Trailer (2:06) from back in 2014. Why this well-edited retrospective of the studio's biggest films is here isn't exactly clear though.

Wrapping things up is a neat little extra, as the entirety of the Twilight Time catalogue is available to peruse, with release dates. Obviously, this will go out of date, but it's interesting to flip through the films (and associated cover art) they've released over the years.

In the package is an eight-page booklet featuring gorgeous art by Bob Peak and a great essay on Rollerball by film historian Julie Kirgo, which looks like it's been updated since Twilight Time's first release of Rollerball. 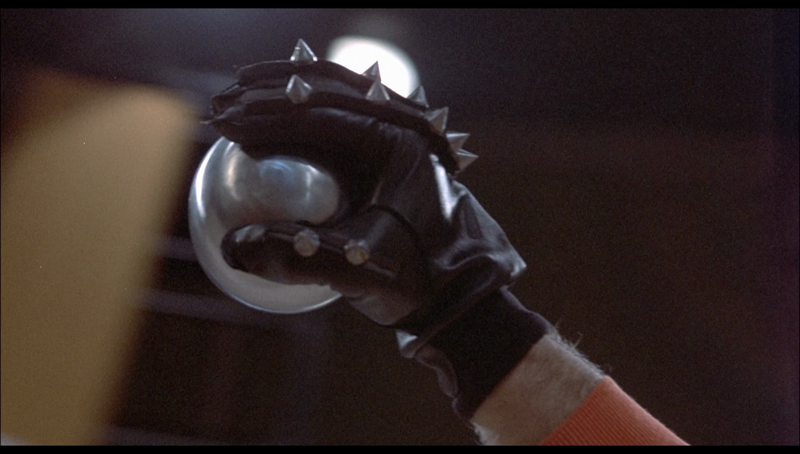 The Bottom Line
If you've never seen Rollerball, it's hard to predict what exactly you're going to be seeing, as the film is telling a few different stories at once, in a couple of tones as well. The end result is an entertaining story of a man and the brutal sport that defines him and society at large, which, despite any number of dated elements, remains timeless, thanks to excellent work all around. The presentation offers no let-downs, and includes a number of extras to enhance the enjoyment of those who missed out on Twilight Time's first 3,000 copies and would be wise to grab the opportunity this time. Francis Rizzo III is a native Long Islander, where he works in academia. In his spare time, he enjoys watching hockey, writing and spending time with his wife, daughter and puppy.Follow him on Twitter