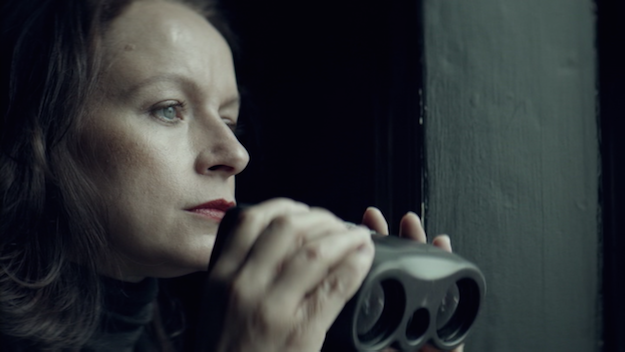 Inspired by the real-life Balkan jewel thief syndicate known as the Pink Panthers (profiled a few years ago in the documentary Smash & Grab), the British-French miniseries The Last Panthers starts as a cop-and-robbers procedural but expands into a Traffik-style multinational examination of the consequences of a single 15-million-Euro diamond heist in Marseille.

Director Johan Renck (Downloading Nancy) stages the heist in question with the flash and energy of a latter-day Bond setpiece, as the culprits work swiftly like well-oiled professionals. Things do not go entirely to plan, however, as one of the younger thieves shoots at the cops during his getaway and ends up unintentionally killing a small girl.

The story then essentially shoots off in three directions. One storyline follows Samantha Morton as insurance investigator Naomi, who traces the diamonds to Serbia but becomes hesitant about proceeding due to a mysterious prior trauma that occurred in the Balkans when Naomi was a UN negotiator in the '90s. John Hurt plays Naomi's crusty boss, Tom, who knows her history but prods her on anyway. The second storyline follows A Prophet's Tahar Rahim as Khalil, a "cowboy" cop intent on finding the thieves by tracing the shooter's abandoned gun to the crime-riddled Marseille housing project where Khalil used to live as a boy. The third storyline follows English-language newcomer Goran Bogdan as Milan, the leader of the Serbians behind the heist, as he and his associates try to unload the diamonds now that they have been tainted by the murder.

The first half of the six-episode series unfurls as addictively as the best current serial dramas. The characters pursue their seemingly straightforward goals, getting gradually drawn in to situations that are far more treacherous than expected. Milan originally pulled off the heist to pay for a life-saving surgery for his younger brother, but with the diamonds now unsellable, he is forced to return to his old gang in Belgrade and seek help from the new boss (and his former rival), Zlatko (Igor Bencina), to get some money. Zlatko orders Milan to kill Naomi, who has been seen snooping around the gang's operation in Belgrade, but something from his past stops him from doing it. Meanwhile, Khalil becomes obsessed with uncovering the connections between Serbian gun smugglers and the gangsters in the Marseille housing project. Khalil's brother Mokhtar (Kamel Labroudi) still lives in the old neighborhood and tries to warn Khalil that his arrogance is bound to lead him into a world of hurt.

The second half of the series shifts the storytelling approach in a way that expands the show's scope while also tossing in a bushel of thematic ambiguity. Without giving too much away, the three main characters essentially stop pursuing their initial tangible goals -- the MacGuffins of the early episodes -- and each become obsessed with obtaining some sort of justice in a situation where the concepts of legitimacy and criminality, right and wrong, have been made synonymous. As previously unseen links between the characters are brought to light, these connections are revealed not to be simple straight lines, but knotty webs that reach back decades before.

This choice to frontload the story with action before boldly downshifting gears and essentially becoming a character study for nearly two whole episodes is risky -- episode 4, in particular, leaves the faint impression of treading water -- but it arguably pays off in the end. Writer Jack Thorne (working from a concept and research by Jérôme Pierrat and Jean-Alain Laban) subverts the expected arc of the average crime show while still delivering a story that's as satisfying to the gut as it is to the head. 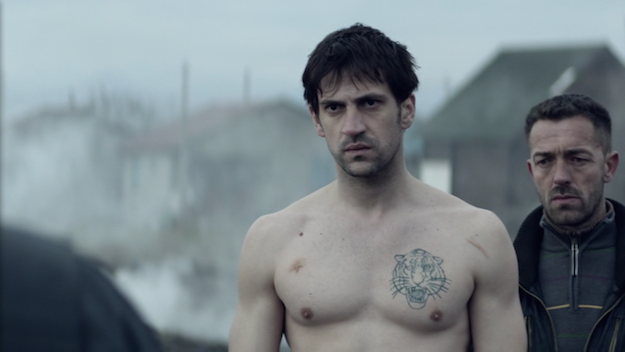 The DVD
The Last Panthers is presented on 2 DVDs, with 3 episodes on each and the bonus features on disc 2.

The Video:
On a pure picture quality level, this widescreen 1.78:1 presentation is fairly strong, with good detail and what appears to be a fairly accurate reproduction of the intended style. The color is desaturated for a "gritty" look that tends toward blues and grays. This approach is even more pronounced in the flashback sequences, which sometimes look like total grayscale. There are some compression issues, with aliasing quite noticeable on the burned-in subtitles for the sequences in French and Serbian. Some busy wide shots are also a bit blocky.

However, what would probably rate a four out of five has to be knocked down a star because this is not the original intended aspect ratio. In the supplements, director Johan Renck mentions that they shot the show in anamorphic 2.35:1 as a stylistic choice, and all the clips in the bonuses are properly letterboxed to this ratio. For the most part, the cropping is easy to miss, but there are a handful of very noticeable shots where two characters are positioned on extreme edges of the frame, sometimes getting bisected unnecessarily and sometimes even disappearing out of the shot for no motivated reason.

The Audio:
The show is complimented by a clean and propulsive Dolby 5.1 surround audio mix. The dialogue is a mix of English, French, and Serbian with burned-in subs during the foreign passages and optional English SDH for the English speech. Everything is clear and understandable, with an immersive atmosphere during most scenes and an impressively forceful electronic-based score by Clark.

(25:54 total) - A group of five featurettes, each lasting roughly 5 minutes, that cover the typical EPK bases, with the writers, producers, directors and actors discussing different aspects of the project, including the real-life Pink Panthers gang that inspired the show.

Final Thoughts:
An intriguing attempt to examine the machinations at work behind a single crime, starting with the micro and expanding gradually to the unwieldy macro. The leading cast is outstanding, particularly the little-known-in-the-US Goran Bogdan, while veteran TV and music video director Johan Renck announces himself as a talent to look out for. The program itself comes highly recommended, but the decision by Acorn to release a version with a cropped aspect ratio knocks that rating down. Readers with a region-free player are recommended to pick up the UK version, which maintains the intended 2.35:1 ratio, while readers who can only access this version should probably Rent It first and see if the cropping bothers them before buying. 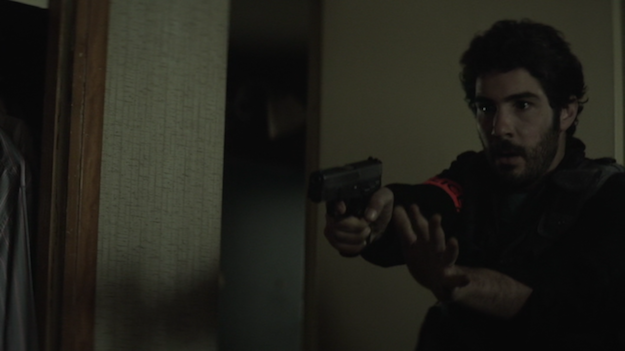