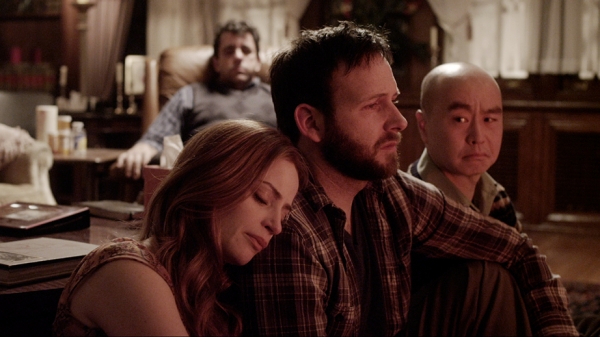 I didn't expect much from a psychological drama starring Judd Hirsh and basically no one else, but then again that's the wonderful thing about movies; every once in a while you get surprised. No one can predict how they will feel about every film, though some are easier than others. So every time you sit down to watch a movie there's a possibility for surprise, one way or another. But Altered Minds is something I might have written off or completely passed by had I seen the cover; lucky it was mailed to me and came packaged with a deadline. And since most of you won't be asked to review this random film that almost no one has seen, I'll act as your personal shopper; it's worth the long shot that it would take for you to slide it into your DVD player.

Famed psychiatrist Dr. Nathaniel Shellner is dying. He has lung cancer, a short time to live, and a few last wishes. Well, basically only one, and that is to have his children back at home for what will most likely be his final birthday. His wife Lillian is by his side, as is the son who followed in his footsteps, the responsible Leonard. Next come his three adopted children: Harry, a professional violinist, Julie, a lovely photography, and Tommy, a successful writer. Each child made it in the world with the help of the magnanimous Dr. Shellner, and as he begins his descend toward death, they are all saddened in their own way. But this last reunion won't go as quietly or as nicely as it was planned, for the past has a way of reminding us that its there at the worst possible moments.

Each grown child in turn is reminded of a memory that they have all suppressed. For Tommy, it has always been just below the surface, even inspiring the horrific nature of his bestselling books. Something to do with a red robin, a secret room, a hidden urn, and their father's now-ancient work with mentally scarred soldiers returning from war. As they creep nearer & nearer to the truth, old defenses break down, sometimes violently, and never beautifully, as bit by bit the memories that have been deeply secreted for years begin to resurface. What did Nathaniel really do for the government, how are his children involved, why is the past so foggy, and what will they each do to uncover the truth?

Altered Minds is surprisingly good. Taken at face value, it has very little too offer; an unfortunate fact that will undoubtedly turn off potential viewers and keep it miles under the radar where it has been swimming since its release. Judd Hirsch is the only name, known mainly for his days on Taxi and perhaps also for a few film appearances in his later days; Independence Day, A Beautiful Mind, Sharnado 2. Other than Hirsch, audiences might recognize Jaime Ray Newman from a bunch of bad TV shows and a few worse movies. But that's where the notability ends, and the story itself doesn't lend the film any extra attention; a family reunion, problems, secrets, everyone's upset, truths are revealed. If it was someone's job to hype this movie up a bit, they didn't do it.

But there's enough here to recommended, and not even hesitantly. All involved do a solid job within their roles. Hirsch as a dying pater familias with guilt & secrets & honest intentions & hidden mistakes. O'Nan, who is in many ways the star, was great as the troubled son who led the charge into the darkness. And Newman was a strong sister figure by his side, lending him a helping hand. The story was much less cliched than it appears, delving deep into the psyche, but also tossing in some thrilling elements to keep our attention. I bought in early, desperately wanted to know what the hell was going on, and never felt tricked into giving my attention. I really enjoyed the simplicity of the set & locale, most of the action taking place in the living room of the family home, and never needed more from the director or cast; they gave exactly what they should, and that was of a surprisingly high quality.

Video: With an aspect ratio of 2.35:1 (16x9) and shot using a Red Epic camera, the video quality of Altered Minds is better than you might expect, given more attention than you might imagine. The cinematography is quite good for a film that focuses primarily on dialogue, memories, and conversation around the table. The freezing winter outside was beautifully shot, and the instability of some images really lent itself to the fractured feeling of the plot.

Audio: The disc was done in English 5.1 Surround with an option for 2.0 Stereo. Also, SDH English subtitles are available in the setup menu. That's it as far as audio options, and the sound quality of the film was never a focal point. Music, effects; nothing came to the forefront.

Extras: There are few special features on the disc. A teaser trailer for the film is provided. Also, there are nine deleted scenes for viewing, including many that feature two children named Sasha & Sylvia, who were omitted from the film. There are three video logs from director Michael Wechsler. And the film can be viewed with two different audio commentaries: behind the scenes or production.

Highly Recommended. So far, only 173 IMDb users have rated this film. To put that in perspective, Sharknado 2, which I mentioned earlier, has 12,000, while Sex Tape, which really should never be mentioned at all, has 84,000. Altered Minds appears like any other throwaway psychological thriller, but it's actually much stronger than how it looks. The acting on display here is top-notch, while the plot is actually far more fascinating than it might at first sound. I put it this way only because I had such very low expectations coming in, never imagining that I would come away fairly impressed. The video was nicely done, the audio was AWOL, and there are a couple extras on the DVD if you're looking to delve deeper. A drama that should not be as unknown as it is, I'll do my small part in seeing if that can change.