Debbie Reynolds stars in the title role of 1964's The Unsinkable Molly Brown, a musical based on a stage play which was loosely based on the real-life Margaret Brown, one of the surviving passengers on the Titanic (and played in the 1997 movie by Kathy Bates). How much of it is actually true is debatable, but to enjoy this movie it's best to not concentrate on that. She's introduced sort of like a superhero, found as a baby floating down the Colorado River (because even then, she was unsinkable) and adopted by Shamus Tobin (Ed Begley Sr.) She grows up in the mountains with his sons and is kind of tomboyish, but one day decides to head to Denver to marry a rich man. She only makes it as far as the much smaller town of Leadville, running into Johnny Brown (Harve Presnell, who is quite unrecognizable compared to his later roles in movies like Fargo), who isn't so wealthy (yet) but resourceful and quite an incredible singer. Molly's a bit skeptical of him, but she hangs around the town finding work singing and playing piano in a local saloon (performing one of the show's signature tunes "Belly Up to the Bar, Boys!") Johnny soon surprises her with a newly-built log cabin, and he's pretty much reeled her in. 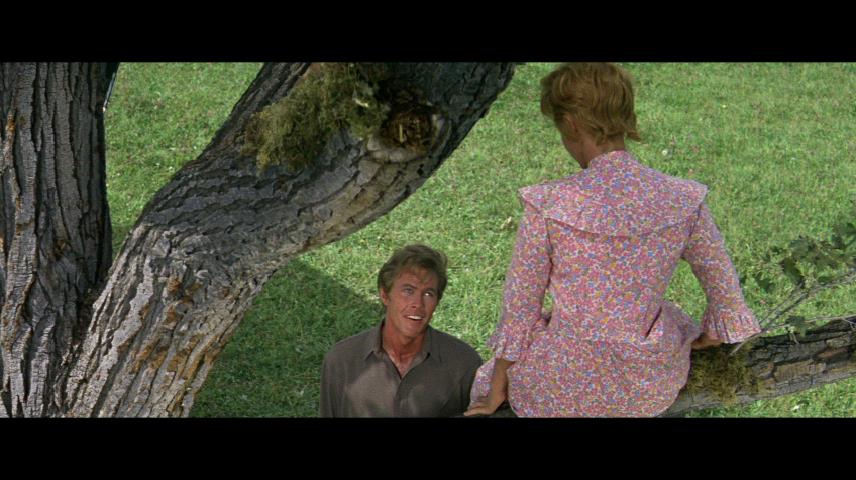 Molly still dreams of riches, and after some good, bad, and then really good fortune, the two of them move to a mansion in Denver's elite rich neighborhood with Shamus in tow. Most of the neighbors there don't take too kindly to them though, as they stick to their humble roots a bit too much- like slightly more refined "Beverly Hillbillies". Their house is styled with the sensibility of a saloon, and the two of them greet others with words like "howdy" while Shamus greets passers-by from the window. Johnny and Molly eventually decide to take a trip to Europe and absorb some culture, hoping they'll fit in more with their neighbors when they return. They end up capturing the hearts of some of the elite citizens over there though, just the way they are, with many heading back to Denver with them for a visit and showing up the snobbish neighbors.

Molly doesn't board the Titanic until quite late in the movie and that whole sequence is rather short (borrowing some special effects footage from A Night to Remember)- surviving the wrecked ship is ultimately just one of her many claims to fame. Director Charles Walters (who previously directed a number of other classic musicals including Easter Parade and Dangerous When Wet) keeps the movie going at a lively pace despite its running time of over two hours. The songs by Meredith Wilson, following up The Music Man, didn't all grab me like other musicals have but will likely grow on me with further viewings. (This didn't get nearly as much play on TV or home video as the decade's other big musicals did.) The movie allows plenty of time for all of them, and Debbie Reynolds' energy never lets up. 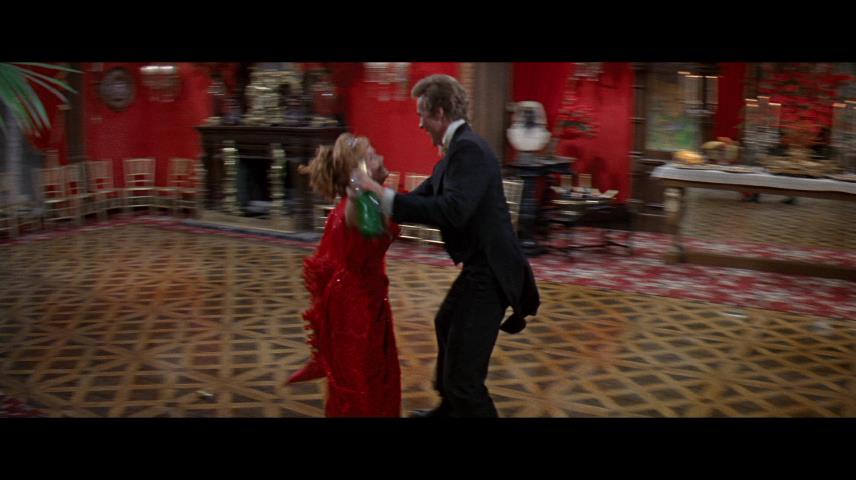 The 2.35 Panavision transfer on this Warner Archive Blu-Ray disc (an actual pressed, not burned, disc) looks just as it should- most of the shots of the Colorado mountains are breathtaking, while others allow details of the matte paintings and indoor studio locations trying to duplicate outdoor settings to show through. The colors didn't appear as bright as they could have been, but this is probably consistent with the intended look of the film. 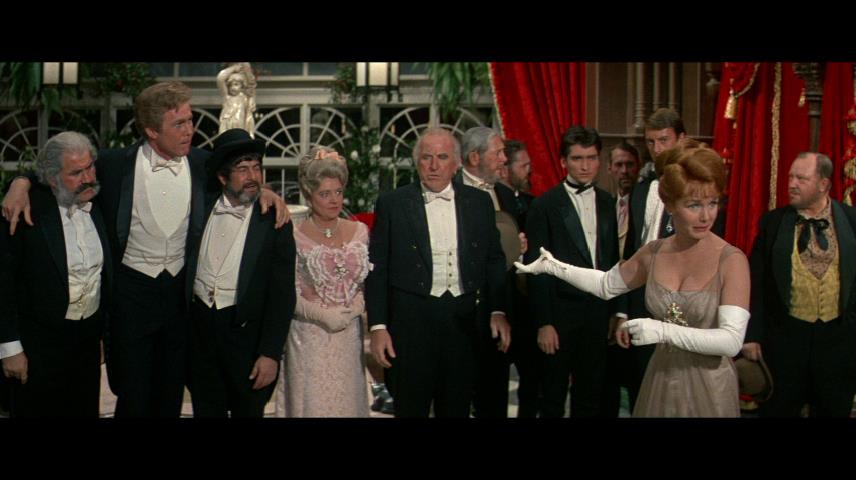 The 70mm magnetic sound track is duplicated here in 5.1 DTS Master Audio. Dialogue is usually panned but tends to stay centered in some scenes. Use of the surround channels is among the best I have heard in a movie of this era, most notably Harve Presnell's singing voice echoing all around through the mountains. The fidelity seems just a bit dated compared to more recent films, but still sounds great overall. 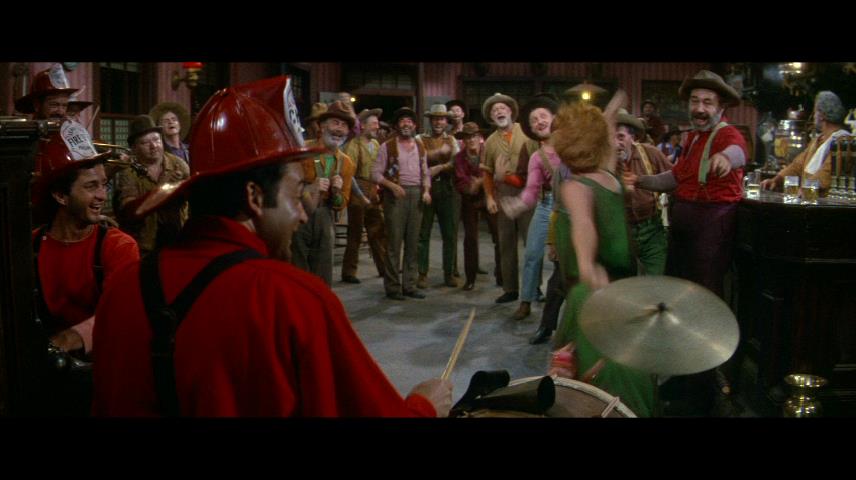 The theatrical trailer is included, in HD, along with a five-minute black-and-white featurette called "The Story of a Dress" which focuses on the wardrobe department and includes a few test shots of Debbie Reynolds.

Refreshingly, the disc itself has a full-color label (unlike most of Warner's recent retail releases), although there is no insert. The quality overall matches that of a retail disc, including proper chaptering. 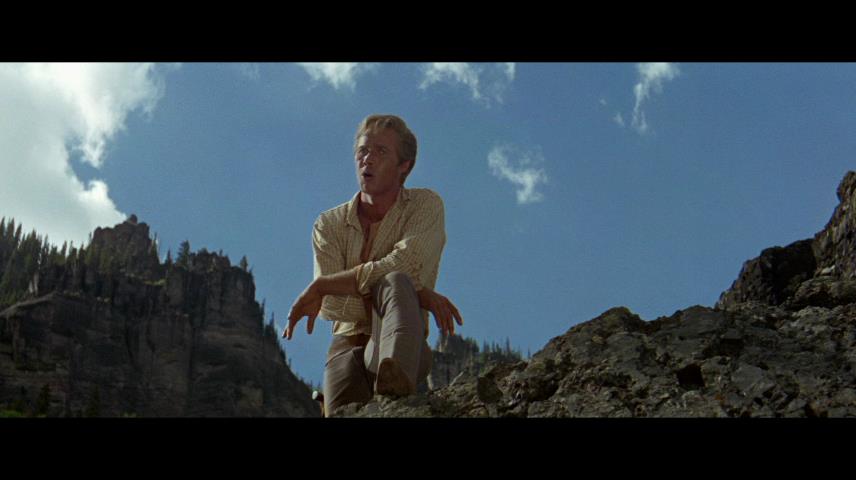 Although it runs a bit long and the songs might not all immediately have you singing them afterwards, The Unsinkable Molly Brown is a delight and a must-have in any collection of movie musicals. It's a bit sad that today's retail environment can't support this sort of release (unlike the laserdisc era when most restored editions of classics had a bit of fanfare and were displayed as prestige items in the better stores), but at least this doesn't seem to have been produced in a limited quantity and will be a joy for many to see turn up in their mailboxes.