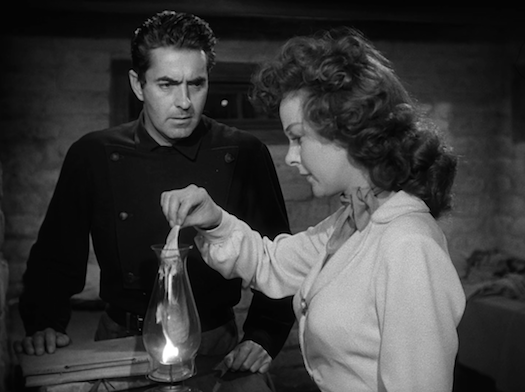 No, not the beloved TV show with the even more beloved theme song. The Rawhide we're discussing today is the 1951 flick, starring Tyrone Power and Susan Hayward, and directed by Henry Hathaway. It's a western hostage drama -- think The Desperate Hours with cowboy boots -- that features across-the-board enjoyable performances and nailbiting suspense.

The "Rawhide" of the title is the name of the stagecoach station where almost all of the movie's action takes place. Feisty female Vinnie Holt (Hayward) is forced to leave the coach in which she was riding and stay over at the Rawhide station, after news spreads of four escaped convicts robbing coaches in the area. Vinnie resists, but with a baby girl in tow (her niece), the stagecoach drivers won't take her any further, just to be safe. Vinnie gets little hospitality from Tom Owens (Power), the greenhorn son of a stagecoach company bigwig who is learning the business and who resents Vinnie's stopover about as much as she does.

Things take a predictably ironic turn when the four convicts in question show up at Rawhide and take everybody hostage. Hugh Marlowe plays Rafe Zimmerman, the handsome, level-headed brains of the operation, while perpetual western heavy Jack Elam plays the downright evil Tevis. George Tobias and Dean Jagger play their sympathetic, somewhat simple escape-mates. The four-some are looking to hijack the gold off of a stagecoach due to come through the station the next morning, and they need Tom to act like everything is hunky-dory at the station until their stage arrives. Zimmerman assumes that Vinnie is Tom's wife, and they decide to keep up the ruse so that she and the baby aren't killed -- or handed over to leering Tevis. Tom and Vinnie concoct different schemes to get away from the would-be robbers -- trying to slip a note to a driver passing through, trying to dig a hole through their bedroom/cell wall before morning -- but circumstances inevitably thwart those plans and set the table for a big showdown in the morning between all these clashing personalities.

Even if the shape of the story is relatively predictable, the script by Dudley Nichols (Stagecoach) is full of enough clever incident and unexpected character development that one never gets the feeling that the storytellers are just marking time. It also helps that Henry Hathaway stages every scene for maximum impact, stylistically placing Rawhide closer to a hard-boiled crime picture than a typical oater. The moment where Jack Elam's baddie uses the helpless baby girl for target practice is one of the most harrowing sequences that has been committed to film.

Rawhide is the kind of film that is well-liked among the select folks who have seen it but is not often spoken about. Well, it deserves better. If you haven't seen it, see it. If you have, see it again and spread the word. 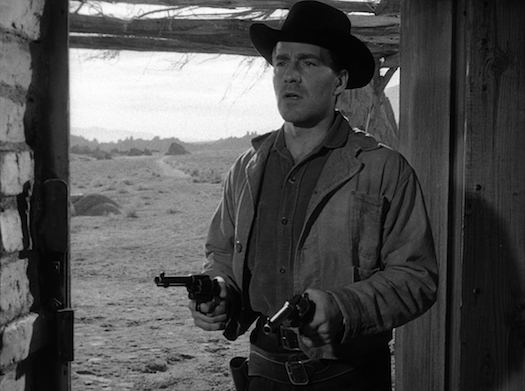 The Video:
Considering the inclusion of a 2007 restoration comparison on the disc (see below), one is left to assume that the master for this AVC-encoded 1080p 1.33:1 transfer is nearly a decade old. If that's true, it looks very strong nonetheless. For the most part, there is crisp detail and nuanced contrast. A little bit of dirt and speckling here and there, plus a pesky hair in the upper right corner of the frame during reels one and five (although I was so sucked into the story that I didn't notice the reappearance of the hair until reel five was almost over). Based on the screencaps over at DVD Beaver, it looks like the hair was there in the Fox DVD release as well (another reason to assume this master is from '07).

The Audio:
There's quiet tape hiss throughout the DTS-HD MA 2.0 mono audio provided, but it registers more as a subconscious indicator of "vintage-ness" than as a distracting flaw. Otherwise, the track is good, with realistic ambience, clear dialogue recording, and plenty of room for Sol Kaplan's musical score. No subtitles.

Special Features:
These are all carried over from Rawhide's original DVD release in the Fox Western Classics 3-pack. 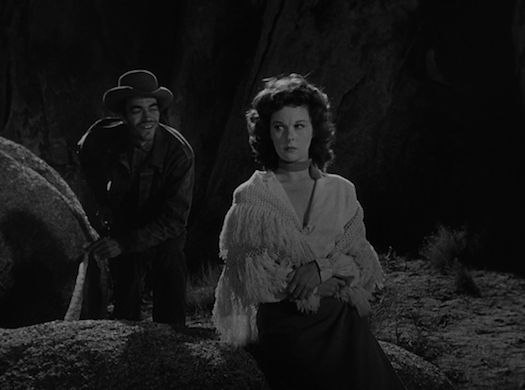