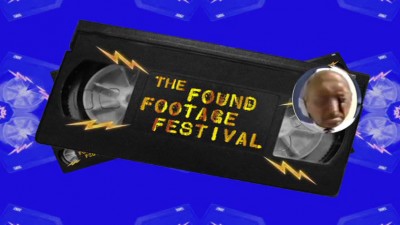 
The Story So Far...
The concept of The Found Footage Festival is a simple one, as Joe Pickett and Nick Prueher take video clips from tapes they find at various outlets, including thrift stores and estate sales, on tour, and present them live in front of audiences, while providing intros, occasional interstitials and, at times, some MST3K-style commentary. Befitting to the content, it's a very lo-fi affair, and the true star of the show are the weird videos they cull from to create their shows, which run approximately between 70 and 90 minutes. Several volumes have been released, and DVDTalk has a review of the first collection.

The Show
Joe and Nick are back with another pair of live shows, ready to unleash more unusual VHS content on an audience more than willing to luxuriate in its oddities. These appearances, recorded in San Francisco in 2008 and Tucson in 2009, see the pair becoming more comfortable with the structure of the show and more a part of the content, as they create original material to go along with the salvaged content they are sharing. This was certainly a risk on their part, since the found footage is why people are there, and these new videos could be received the way new songs are at a well-known act's concert (leading audiences to say "Just play the hits.") Most of these are quick, like a visit to a bidet they show the instructional video for or still from their Saturday-morning cartoon pitch, and those are fun. The more involved parodies, like their "hunk harassment" and faux public-access videos, are less successful, though the presence of Chris Elliott on a beard-focused talk show almost makes it worth it. The same goes for a sequence that features David Wain and a very early role for Kumail Nanjiani. At the very least, these bits show the creators have very good taste.

Familiar favorites from earlier shows return, including exercise montages, how-to videos and public-access footage, with all-new examples of their glory. There's even another delightful Federated Mutual exercise in abject horror, disguised as safety awareness. The exercise videos in particular are impressive in their range and insanity, including segments from videos featuring Angela Lansbury, Estelle Getty, Milton Berle and Dolph Lundgren, as well as off-the-wall routines involving laughter, Barbie, babies and an intriguing, religion-inspired pair named Rock and Zar. The how-tos are similarly entertaining, covering topics like computer game piracy (with a helpful rap), achieving an erection, massaging cats and singing like Elvis. The best however, may be contained in something called "The Wit and Wisdom of Pretty Boy Floyd", in which the billiards pro ostensibly teaches you about pool hustling, but really just rants about trophies, money, food and Ed. 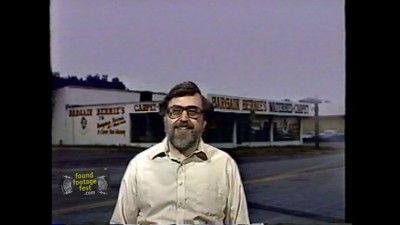 The corporate videos remain a definite hallmark of the Festival, and these volumes have plenty to enjoy, including a series of wonderfully woeful instructionals, with clips from Wendy's (continuing from a series seen in volumes one and two), Arby's (featuring a not-at-all-tremendously-terrible rap), a Chicago-area supermarket chain called Jewel, and Chick Fil-a, which takes the cake with their people-faced ingredients. Meanwhile, the religious-based programming is a consistent source of unadulterated joy, whether it's potentially scarring kids programming with janky puppets, attempts to reach the young people that are trying way too hard or just simply a mess of clowns. Let me close my eyes a second and, yep, they are still there. Not going anywhere.

Though these two shows cover several genres of found footage seen in previous shows, they blaze new trails as well, including a look at the tropes of Saturday-morning cartoons (with Chuck "Chuck Norris' Karate Kommandos" Norris), self-defense videos (featuring lunatics enjoying themselves far too much), sexual-harassment lessons (with just the bad stuff), the sad world of VCR games (where we find Rich Little and his unimpressive range of impressions), FFF After Dark (with more adult material than usual, including some particularly unnecessary footage) and video dating ads, which are both excellent and depressing, all at once. Also new to this set (found in volume four) is a cover slideshow, allowing the guys to show off VHS cover art they found interesting (but the video didn't live up to the hype. )

Here's a few of the highlights that haven't been mentioned yet:

And, as is customary, explicit full-frontal male nudity. 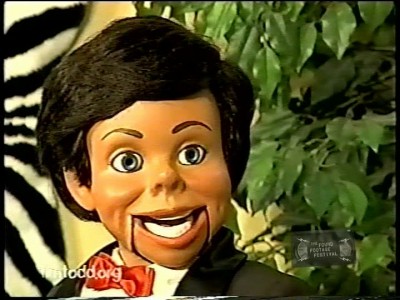 The DVDs
Volumes three and four of The Found Footage Festival are split between two DVDs, which are packed in a dual-hubbed, standard-width keepcase with simple, silly cover art. The discs feature two levels of menus, with options to play the special, select scenes and check out the extras, while you can watch the featured clips with or without the live show aspect. There are no audio options, nor are there subtitles available.

The Quality
The quality has ticked up a bit since the first set, as Volume Three is presented with the live show in letterboxed full-screen, while Volume Four is in anamorphic widescreen, with the VHS footage delivered column-boxed. The theater footage has improved dramatically from the first set, with more color, better detail and less issues with the black levels, though the variety of ages and sources for the VHS footage keeps it looking as inconsistent as it has before. This is the footage you expect, in a manner that you'd want to watch it.

Nothing has changed as far as the Dolby Digital 2.0 tracks are concerned, which means you get clear, easily understood voices in the theater, and the sound in the found footage is as good as the material will likely allow.

The Extras
The bonus content for Volume Three kicks off with eight clips (9:13) from the series' public-access talk show, Talkin' Beards. Though this isn't the Festival's best work, the bonus Chris Elliott is well appreciated.

"Babes!" (3:13) is a pile of ridiculousness, made up of naked or nearly-naked women doing various activities, including fishing, enforcing the law and housekeeping. It's pretty much the definition of exploitative and is compulsively watchable.

Volume four raises the series' bar for extras, starting with 3:35 of "Jock Jams"--athletes singing as teams, which was once a thing, and which should be once more. Among the offenders are the NFL 49ers, Redskins and Rams, the NBA's Lakers, Major League Baseball's Mets and the NHL Flames, who take the surprising crown as best performers with their song "Red Hot."

Up next is 3:11 more of the video dating clips from the main feature, which remains as sad and funny as it was before. And since we get more of the real thing, we also get 4:39 more of the show's parody version, which means more of Wain and more of Nanjiani, which are never bad ideas.

"Movie Trailers" (6:48) serves up five truly bad movie trailers for the films Action, U.S.A., Computer Beach Party, Fear Forest, Firehead and Wilding: The Children of Violence. Fear Forest, the most modern film, is probably also the worst, though none of them are at all good. (The terribly-titled Firehead however has the dual treat of Chris Lemon and Martin Landau.)

Seven bonus clips from the Festival archives (7:32) are available to peruse, and they are all entertaining. "How to Be a Real Man" might be the best, as it melodramatically depicts a man choosing God over popular music, but "Harassment Comedy"'s awful, offensive joke examples are a close second. You also get the heavy-handed religious message of "Courtship vs. Dating", a strange dog-starring soap opera, the educational "How to Raise a Street-Smart Kid", a dandy illustration of "More Trick and Fancy Roping", and "More Rock Vocals", which will teach you how to hold that high note your Stryper cover band needs.

Wrapping up the content is an amusing 2:18 interview with Greg Thompson, star of "At Home with English", the ESL videos with questionable vocabulary and grammar choices.

Each disc also features a 2:01 trailer for Joe and Nick's documentary Dirty Country. 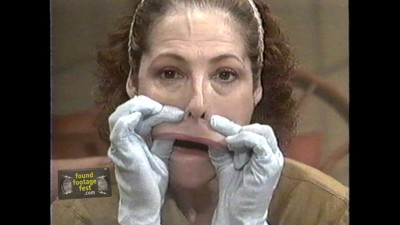 The Bottom Line
The second set of The Found Footage Festival sees the team up its game, for both good (better looking theater footage) and bad (more and longer original bits) effect. The found footage is about the same as before, hitting on the genres that have worked before and sprinkling in some new stuff, with the results being consistently funny, with perhaps a higher batting average on the truly hilarious material. The quality is solid across the board, and there's more bonus content to check out, marking this set as a very funny step up from their debut.