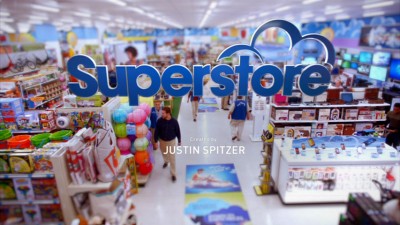 
The Show
NBC hasn't had the greatest luck of late when it comes to launching sitcoms. Not since the mid-to-late aughts, when they dominated TV comedy (at least from a critical perspective) with shows like 30 Rock, Parks and Recreation and Community. But that all ended when they handled Chelsea Handler and Whitney Cummings their own shows. Since then, it's been rough seas for comedy on NBC, and this past TV season, only one sitcom (of NBC's admittedly meager offerings) made it through to see a second season: Superstore.

Created by The Office's Justin Spitzer, the show is a basic sitcom hailing from the well-worn genre of workplace comedies. There's little of the surreal humor of 30 Rock, the political parody of Parks and Rec or the creative meta-ness of Community inside the walls of Cloud 9, the show's big-box stand-in for Walmart. Rather than doing something special or quirky, Superstore does something that all sitcoms should aspire to: make you care about very likable characters. By the time you wind your way through the show's all-too-brief 11 episodes, you're going to find yourself wondering what comes next and want to get back to spending time with these new friends and their daily struggles. 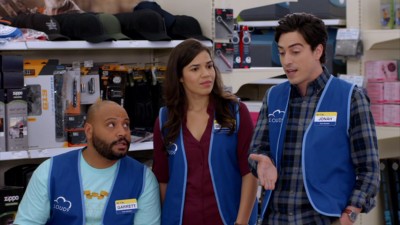 Those characters are wonderfully real and relatable, like America Ferrara's Amy, the struggling mom looking to improve her life the only way she sees how; Mark McKinney's good guy Glenn, who only wants to do the right thing, like the Good Book tells him; or Lauren Ash's abrasive Dina, a by-the-book bruiser of a manager who secretly hopes to make a connection. In fact, the only character who doesn't come across as real is the show's would-be lead, Jonah (Ben Feldman), a privileged college graduate slumming it in retail when his planned path takes a detour into Cloud 9. Seemingly intended to be the audience's way into the show's reality, as we join him in exploring this strange new world, he's just too much of an invention rather than a person when compared with the rest of the main cast. Nothing against Feldman, who holds his own alongside the rest of the cast, but you'd much rather be watching Ferrara do her thing.

Though everyone's flaws and personalities are played for obvious laughs, from gay Filipino striver Mateo (Nico Santos) to naive teen mom Cheyenne (Nichole Bloom) to smart-ass wheelchair-bound Garrett (Colton Dunn), no one is really a cartoon. Not even Cheyenne's trashy baby daddy (Johnny Pemberton) or Glenn, whose religious background offers an easy set-up for the show to poke fun at conservative viewpoints, is well-rounded--a meek man of faith but not a hateful one--making him easy to love (though McKinney's performance certainly helps in reaching that point.) Impressively, the side characters, who get hardly any lines, are also memorable and fleshed out in their own way, like creepy Sal and stoic Brett, but especially crewmember Sandra (Kaliko Kauahi), whose dark background reveals itself through single lines here and there, making you want to follow her when the show moves past her.

The season (which was unfortunately cut down from the original 13-episode order) goes by in a blink, starting with Jonah's acclimation to the store and its denizen before shifting to become more about Amy and her story. Episodes are powered by store-focused plots, whether it's about selling salsa by exploiting racial stereotypes, work flirting, a wedding sale that leads to Glenn's gay-marriage overreaction, or a late shift that sees the crew accidentally locked in overnight. It's not groundbreaking, but it is believable (perhaps even cathartic if you've worked in retail.) Twisted through these are various tales of interpersonal relationships, as friendships strengthen and romances possibly emerge. But surprisingly there's a bit of a serial story at work, which subtly unfolds over the course of the season, intertwined with the characters' lives, culminating in the finale and a cliffhanger of an ending. It's a rather wonderful, compact package that suffers no real low points along the way (though it does take a moment to get rolling, which it does once Jonah's spotlight gives way to Amy.

Though it doesn't offer much in the way of innovation, that's not to say it's not an ambitious series. There are a number of moments in the first season that feature rather striking visuals, while the seques between moments, featuring various customers acting in various ways that will call to mind a certain popular website about people who frequent a certain store that may or may not resemble Cloud 9, offer delightful transitions that maintain the laughs rather than derail them. The thing is, Superstore isn't about the style or the gimmick. It's just good, honest sitcom comedy with people you really like (played by very funny actors.) It'll be interesting to see where the show goes from here, but it's off to a great start. 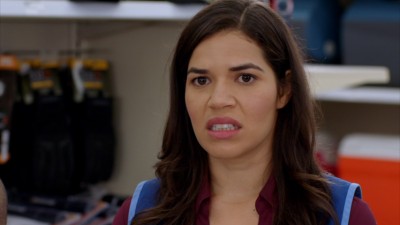 The Discs
The 11 episodes of the first season of Superstore are split between a pair of DVDs, which are packed in a clear, standard-width keepcase with a tray for the second disc, a promotional insert and a two-sided cover with a list of episodes on the inside. The case comes in an embossed slipcover that repeats the cover art. The discs feature static anamorphic widescreen menus offering options to watch all the episodes, select shows, adjust the setup and check out the extras. There are no audio options, but subtitles are included in English SDH.

The Quality
Perhaps it's the ever-decreasing amount of non-HD viewing options out there, but the anamorphic widescreen video on this discs has a softness that's hardly appealing. In general, the episodes look good, with a solid level of fine detail and good color (the blues of Cloud 9 and its associated brand elements really shine) but the sharpness is just disappointing after watching the show in high definition. There's nothing worth complaining about here other than this not being a Blu-ray release.

The audio, delivered in Dolby Digital 5.1 tracks, are clean and crisp, without any concerns about distortion. Dialogue is job number one, and it's all nice and audible, while the surrounds pick up some ambient sound. The bass and surrounds give the show's use of popular music a boost, making scenes with a soundtrack a bit more present, but the presentation is consistently good across the board.

The Extras
First up are 23 deleted scenes, running a total of 12:24. There are a few interesting moments here, including some scenes with Dina and a mannequin, a few alt takes and more PA announcements from Garrett, but they are mostly just additional personality beats, rather than excised plot points. Make sure to check out the attempted "Danny Boy" duet by Amy and Dina though.

A 14:28 gag reel includes a pile of screw-ups from the first season, seemingly a result of rampant improvisation on the set, with McKinney (who doesn't break character) often being responsible for cracking others up, while Ferrara struggles to hold it together. There are a lot of genuinely funny moments from what seems like a fun set. These clips are filled to the brim with swearing (there may be more F-words than a Tarantino film) but oddly a pair of middle fingers are blurred. 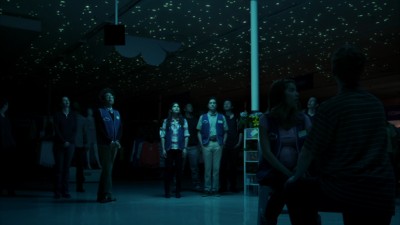 The Bottom Line
Though unfortunately brief in episodes, the first season of Superstore is certainly a successful one, crafting an assortment of enjoyable, relatable characters who live in a real world and have fun misadventures. It doesn't break new ground for sitcoms, but it definitely doesn't troll the lower depths like so many other shows. The discs look and sound very nice, and offer a few extras worth checking out, so this is a solid opportunity for fans to revisit the show and for others to discover a new favorite.