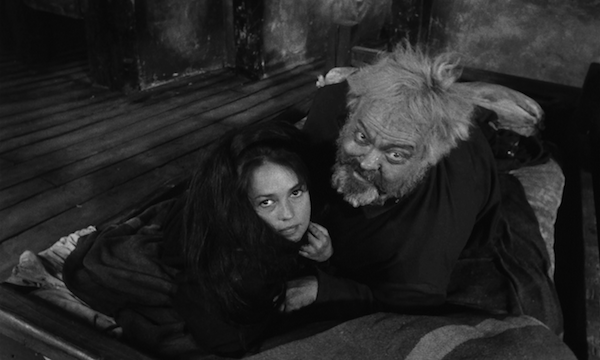 Legal red tape has kept Orson Welles's 1965 film Chimes at Midnight (aka Falstaff) from its intended audience for half a century. Poor-quality dupes and bootlegs have circulated, but only a fraction of the many cinephiles who would categorize themselves as Welles fans have bothered to view the film that way. Now, the Criterion Collection at long last brings us a restored, remastered Chimes at Midnight that makes it clear that the film is not merely an interesting footnote to a great career but is, in fact, a late-career masterpiece.

Granted, like many of Welles's films from this time, Chimes at Midnight often reveals the limitations of its low-budget production. For example, most of the audio was post-dubbed and, even with reported corrections made to improve this new version, the sounds coming from characters' lips only sometimes match the movements of said lips. (More than a few characters have also clearly been re-dubbed by Welles himself.) After the inevitable initial distraction and irritation passes, the slightly ramshackle result seems oddly in tune with the temperament of the film's main character, Shakespeare's jolly fat old fibber, John Falstaff.

Welles long held an affection for this hard-partying clown of a character (maybe because Welles saw a bit of his own alcoholic father in the fiction) and, by 1965, the actor-director had indulged himself enough to only need a little bit of padding to achieve Falstaff's gluttonous girth. From his love of good living to his knack for holding a room rapt with the power of his cheeky patter, there is more than a little Falstaff in Welles. It comes as no surprise then that he fits into this role like a glove, bellowing self-deluded BS and stomping around the Boar's Head Inn like a dizzy elephant whose only motivation is taking the next good sip of fortified wine.

What is surprising is how melancholy and emotionally affecting Welles's Falstaff film is. Using text from five Shakespeare plays -- but mostly the two-part Henry IV -- Welles has pared down the Bard to highlight the relationship between the future Henry V, Prince Hal (Keith Baxter), and his two would-be fathers. To paraphrase Keith Baxter's own comments in the Criterion bonus features, King Henry IV (played here by John Gielgud) is the father that Hal respects but cannot love while Falstaff is the father that Hal loves but cannot respect. By focusing his film on this relationship and the prince's inevitable heartbreaking choice to abandon his friend, Welles taps into the sadness and loneliness lurking behind Falstaff's clownish antics. Welles's performance during the climactic coronation scene, where the newly minted King Henry V famously tells Falstaff, "I know thee not, old man," is probably the most subtly layered acting he has ever done on film. The moment largely consists of silent reactions that are so eloquent and sadly heartfelt that it produces tears and chills in equal measure. 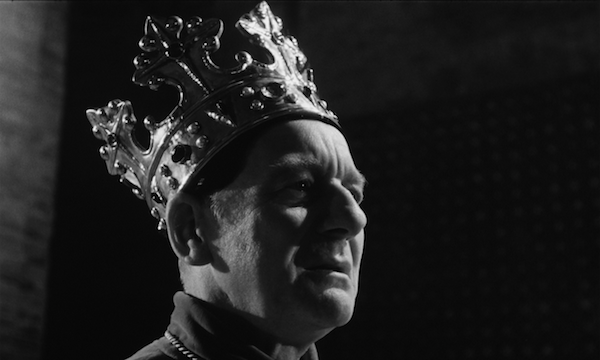 Even with a career-best performance from its actor-director, Chimes at Midnight is far from a one-man show. Baxter is also perfectly cast as Prince Hal: handsome, playful, while also troubled by the choices he will soon have to make. The chemistry between Welles and Baxter, as they joke and tease and verbally combat each other, crackles with an electricity that can't be precisely planned or manufactured. And, for all the joking little Gielgud impersonations that different characters make throughout the film, it's hard to deny that Gielgud himself (in the parlance of our times) brings it. There is an unassailable authority to his realization of the tormented King Henry that is bracing.

Jeanne Moreau has a relatively minor role as Falstaff's prostitute paramour Doll Tearsheet, but she makes as bold an impression as any of the central characters. Whether haranguing Falstaff with jibes more intense than anything Prince Hal could concoct or supplicating her man with tender pillow talk, Moreau's Doll is passionately outsized in her commitment to this big, fat, lovable loser.

Chimes at Midnight has fewer flashy moments than many of Welles's other films, but his craftsmanship here is nonetheless jaw-dropping. His blocking and camera placement are unimpeachable; never once does it feel like we're watching filmed theater. This is vigorous and vibrant cinema, from first frame to last. When Welles mounts his big battle centerpiece, between King Henry and Hotspur's opposing armies, the result is visceral and chaotic, and totally unlike any filmed combat sequence before or since. Wikipedia claims that Chimes inspired later famous staged battles in films like Braveheart, but none of these more recent Hollywood films are able to edit and juxtapose their images in a way that pushes them beyond common action tropes and beyond standard storytelling to the level of hypnotic, abstract brutality that Welles achieves here.

In his later years, Orson Welles was convinced that Chimes at Midnight is the finest film that he ever made. After inheriting the conventional wisdom of the past 6 decades or so, it's hard to make a snap judgment, unseat the reigning champion, and agree with Welles. But, even on first belated viewing, it is apparent, now that more people actually have a chance to see it, that this film has a fighting chance at securing the silver medal. 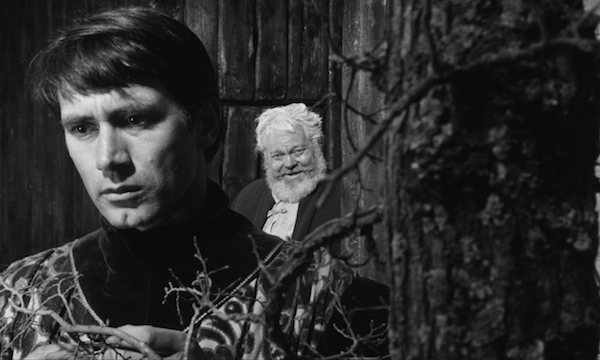 The Blu-ray
Chimes at Midnight is packaged with a fold-out booklet that features an essay by Michael Anderegg.

The Video:
There's something still a bit grungy about the look of the newly restored Chimes at Midnight, no doubt the result of its tumultuous low-budget shoot, but the cleaned-up AVC-encoded 1080p 1.66:1 transfer is stable with no signs of dirt or damage. Edmond Richard's high-contrast cinematography translates well here, and it enhances the dramatic ambience without looking as blatantly stylized as some of Welles's other films. Detail fluctuates a bit, as does the film grain resolution, but, for the most part, this restoration is tremendously satisfying.

The Audio:
The sound has always been notoriously bad on this film, apparently even in its initial theatrical run. The new remastered mix, in LPCM mono audio, makes the dialogue far more intelligible than earlier Chimes viewers would expect. The remaster also nicely preserves the often clever sound design that gives many sequences some added dimension and scope that isn't always captured on screen. However, the new restoration cannot remove all the limitations of the source material. Some lines are still a bit garbled (thank goodness for the English SDH track) and certain speeches are beset by sharp, sibilant "S"s. Sssssssss.

- Though he touches on the history of the source texts and this production, Naremore largely does a thematic analysis of the story and its characters.


Final Thoughts:
Another neglected masterpiece gets its belated due, thanks to this thoughtful presentation from Criterion. Even folks who consider themselves Orson Welles fans have probably never taken a look at this inventive and heartfelt re-tooling of Shakespeare's histories, but there's no better time to rewrite history than the present. DVD Talk Collector Series. 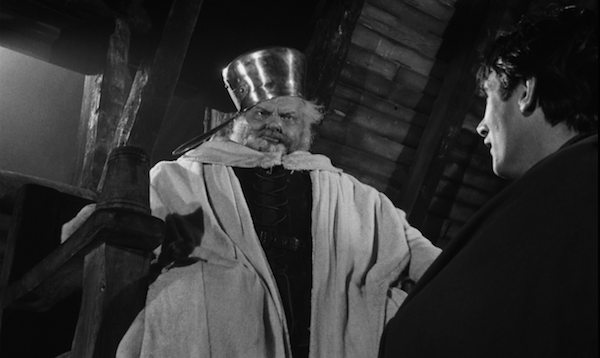