Synapse Films // Unrated // September 13, 2016
List Price: $34.95 [Buy now and save at Amazon]
Review by Tyler Foster | posted October 6, 2016 | E-mail the Author
Note: Although screencaps should only be considered an idea of what the disc looks like, click any capture in this review to expand the image to a full size .png. 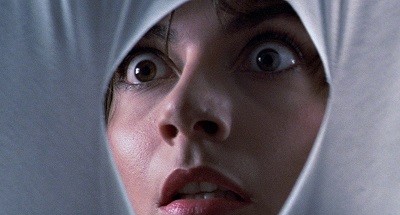 Any filmmaker that directs enough horror movies will eventually be asked the same question: "Why do you make movies like this? Are you some kind of sicko?" Although the nature of the genre -- people being gruesomely murdered -- lends itself to a more specific brand of psychoanalysis, the root of the question is based in the age-old debate about whether or not one can separate the art from the artist. These days, the question mostly comes up when trying to remove a filmmaker or performer's work from the context of real-life scandal, but the eventual branding of horror as a "fun" genre starting in the 1980s will always cause certain, arguably more prudish members of the audience to become suspicious that good horror represents a subconscious or even conscious desire to indulge in the horrific things being depicted.

With that in mind, Dario Argento's Tenebrae is a wickedly funny jab at anyone who would ask him that question, a feature-length bit of tongue-in-cheek self-deprecation that both rejects and invites that suspicion with equal measure. Argento, who also wrote the screenplay, doles out new pieces of grist for his critics to chew over with a certain measured glee, and does so without letting the movie's pace, visual style, or surprisingly clever mystery fall by the wayside.

Anthony Franciosa plays Peter Neal, an author of several popular novels about serial killers, who arrives in Italy to promote his latest book, Tenebrae. Upon arriving, he is confronted by Detective Germani (Giuliano Gemma), who informs him that someone has murdered a local girl and shoved pages of Tenebrae in her mouth. Neal also discovers a letter left in his room by the killer, and continues to receive similar letters as more and more bodies rack up. Although Neal continues his book tour, at the urging of his agent Bullmer (John Saxon) and the help of his assistant Anne (Daria Nicolodi), Neal is understandably fixated on the idea of the murderer being somehow motivated by his books. And, wait -- was that his crazy ex-fiancee Jane McKerrow (Verionica Lario)?

Throughout the film, Argento draws parallels between himself and Peter Neal, then openly engages in the behavior that Neal is accused of. Lesbian reporter Tilde (Mirella D'Angelo) angrily grills him at an airport press conference on whether the murder of women in his work could be read as sexist. Later, TV personality Christiano Berti (John Steiner) refers to Tenebrae as a work about human perversion. Neal disagrees with both ideas, but in a flashback sequence, Argento sets up the idea that the killings are revenge for some kind of sexual humiliation, as Eva Robins shoves her bright red heel into the mouth of the person having the flashback. Just as Tilde accuses, most of the victims here are young, nubile women, at least one of whom dies naked. Argento seems to take a wicked delight in adding an extra degree of sadism to the violence, such as a victim that takes an axe to the head and then pulls it out and looks at it before dying, or a scene with a dismembered arm that Tarantino may have been thinking of when he made Kill Bill. 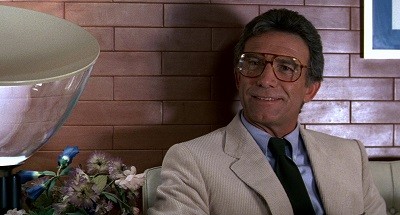 At the same time, the victims are generally portrayed as sympathetic, and the killer's methodology in terms of choosing the victims and the gruesomeness of their deaths is more of a comment on sexism rather than an indulgence in it.

With one eye on the various textural and subtextural levels the film is operating on, Argento has the other eye on the visuals, which are both gorgeous and add further wrinkles to his sly commentary. The movie is packed with POV tracking shots, most of which take the place of the murderer until their identity is revealed, a device that secretly plays with the viewer's understanding of the story, while also forcing Argento's moral detractors into a "complicit" perspective (in the extras, it is noted that Argento always insisted on playing the black-gloved killers in his films himself, so it could also be viewed as forcing said detractors into Argento's head). Although the POV shots are obvious, they're just a part of the film's overall voyeuristic atmosphere. One particularly effective bit of leering comes in the middle of the movie, in the form of a tracking shot peering in the windows of a uniquely-designed house, which creates suspense just through the unpredictable nature of the architecture. The posters feature some of the movie's more striking imagery, including a sheet ripped by a razorblade to reveal a woman's face, or a woman's body, lying on the floor, head tilted back, with a trickle of blood running down her neck, but within the film these sequences are revealed to be simply one piece of a series of well-designed shots that convey the story with a bold efficiency. Another spectacularly directed sequence involves the world's most incredible stunt dog.

What those who accuse horror directors of living out their twisted fantasies arguably miss is the catharsis of even a stupid slasher movie is still a fundamental expression of art's basic purpose, allowing us to consider our mortality while also laughing at it. Argento's tactic, then, is to take that "horror director" criticism and examine it while also having fun with it. Tenebrae, for all its deconstruction, is not a particularly deep film, built around a fun B-mystery plotline, but it is a wickedly clever one, that answers the question, "Are horror directors sick?" with a winking "What if I were?"

The Blu-ray
In February, Synapse Films released a 2-disc Steelbook edition of Tenebrae, limited to 3000 copies (as well as three variant slipcover designs exclusive to Hi-Def Ninja). However, the second disc was a CD soundtrack, and other than the packaging, this new one-disc standard Blu-ray of Tenebrae is identical, content-wise. This features the fairly classic image of a girl lying down, blood trickling from her throat, head tilted back, with stylized coloring that sort of matches the black, white, and yellow color scheme of the rest of the artwork. The disc comes in a Vortex Blu-ray case, and there is no insert. 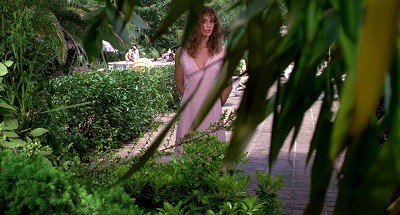 The Video and Audio
For their Blu-ray release, Synapse Films has utilized Wild Side Video's recent scan from the original camera negative and then performed additional color correction and clean-up to produce a unique 1080p 1.85:1 AVC-encoded image. Aside from whites that tend to bloom and obliterate detail (a quirk of the original photography), this is a fantastic-looking transfer. Earlier scans of Tenebrae featured ugly CRT noise, but here the film's varying graininess is restored to a more natural appearance. The most striking thing about this new transfer is the bright and vivid color palette, with only a minor bit of fluctuation during a scene where John Saxon is seated in an outdoor plaza. Detail is very strong, and I did not notice any banding or compression artifacts.

A couple of additional screencaps can be found at the link in the body of the review, and here, here, and here.

Audio-wise, the disc offers two options, DTS-HD Master Audio 2.0 English or Italian. Since either version of the film is technically dubbed, as most of the movie was filmed without sound, I took the advice of fellow critic and giallo expert and went with the English soundtrack. Dialogue sounds nice and crisp, and the fun score by three Goblin members, credited as Simonetti, Pignatelli, and Morante (Claudio, Fabio, and Massimo, respectively), sounds bold and energetic. A brand new English subtitle translation is also included.

The Extras
In 2015, Arrow Video released a Region B special edition of Tenebrae. Although their disc features a longer list of supplements, what Synapse's disc lacks in volume, it makes up for in length. (Plus, the extras are different across the board -- hardcore fans will likely end up getting both discs.)

Although the option is not presented from the main menu, the first supplement is the ability to watch the film with English inserts and credits, which have been scanned and restored by Synapse at 3K resolution. This includes not just the opening and closing credits, but also shots of the letters that Peter Neal receives, and other on-screen documents.

Aside from the alternate version of the film, the first major extra is an audio commentary by film critic and author Maitland McDonagh, whose work includes a seminal book, Broken Mirrors/Broken Minds, about Argento's work. It's a decent track, touching on the way the themes of Tenebrae both fit within Argento's career and where they can be seen in his other work, or how his work led up to Tenebrae. The only downside is a lengthy portion in the middle where McDonagh gets a bit distracted explaining what's appearing on screen. (It also includes her delightful statement that labeling "plot holes" is "the last resort of the asshole.") 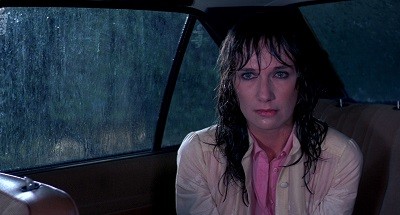 The second major extra here is "Yellow Fever: The Rise and Fall of the Giallo" (89:24), a historical overview and analysis of certain genre films directed by Calum Waddell. As someone who is relatively unfamiliar with Italian horror, the documentary offers up lots of interesting insight, including the roots of giallo in pulp crime novels and film noir, the evolution of Argento's themes and style, and a surprisingly robust chunk just on Tenebrae (even if it is relevant here). The doc features interviews from a wide range of critics (McDonagh, Alan Jones, Kim Newman, etc.) and filmmakers (including Argento, Umberto Lenzi, Ruggero Deodato, etc.), but the area where it comes up short is archival footage and images. The still imagery on screen, aside from the clean and straightforward presentation of movie posters, complete with a credit or two, feels sloppy and haphazard, including screencaps from Blu-ray transfers, low-res images crawling with artifacts, and a sense of laziness in the way they're animated. Waddell is also limited in terms of what kind of footage can be included, relying on movie trailers (with the exception of Tenebrae itself). The doc can also feel slightly unfocused at times, with a train-of-thought air to it, although just when I began to get really frustrated, the film snapped back into focus around Argento's work.

The disc is rounded out by some archival supplements, including an alternate opening credits sequence (2:15), the U.S. Credits Sequence (1:53), bearing the title Unsane, and two theatrical trailers, for the International and Japanese releases.

Conclusion
Tenebrae is both a stylish and exciting horror film and a fairly delightful rebuke by Argento that takes the complaints usually lobbed at horror directors and lobs them right back at them. Synapse's Blu-ray edition is also quite impressive, featuring a fantastic presentation of the film and some decent extras. Highly recommended.