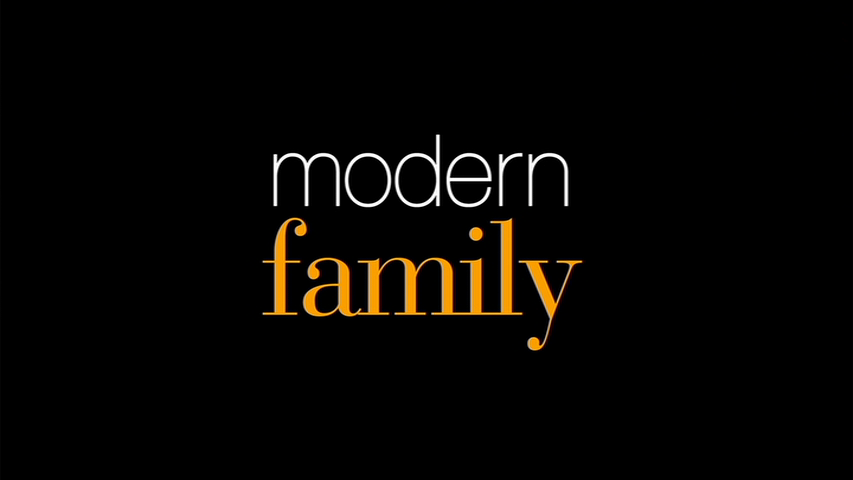 
The Story So Far...
Telling the story of three generations of the Pritchett clan, centered around Jay (Ed O'Neill) and his kids Claire (Julie Bowen) and Mitchell (Jesse Tyler Ferguson), and their respective families, Modern Family was, for all intents and purposes, an instant hit with critics and viewers (earning five Best Comedy Emmys in its first five seasons.) A single-camera sitcom without a laugh track, this mockumentary series (complete with talking head interviews with the family) blends together three types of relationships and the laughs and struggles that come with them, with a heaping helping of heart, to create a genuine feel-good show with a massive amount of laughs. The first six seasons have been released on DVD (with the first few also available on Blu-Ray), and DVDTalk has reviews of the majority of the releases.

The Show
Though Modern Family remains a hit TV show, after seven seasons there comes temptation to change things up so as to not grow stale. More often than not, this is the start of a show's downfall, as the show either becomes something other than what fans enjoyed or the changes feel unnatural and forced, as was the case with the introduction of Cousin Oliver on The Brady Bunch. His arrival, which seemed intended to inject some cuteness to balance the kids aging out of their appeal. It didn't work, and the character is now shorthand for a series' creative nadir.

It may too earlier to call Joe, the toddler son of Jay (Ed O'Neill) and Gloria (Sofia Vergara), Modern Family's Cousin Oliver, but his arrival as the cute new kid, just as the show's core kids are in their teens, seems to fit the mold. That he does little more than throw out adorable line readings makes it that much more a comparison. While he did allow for some character development for the older Jay, his retirement this season offered similar possibilities, in a much more organic way.

Jay's retirement also allowed the show to take Claire (Julie Bowen) in a new direction, as she takes over for Jay at his company. The new challenge created a few fun storylines, including Phil (Ty Burrell) feeling neglected and Claire trying to have it all, balancing work and family. Bowen tends to be at her comic best when her character tries to cope with stress, and she's got plenty of it here. Burrell gets a solid plotline of his own as he copes with his children growing up, in a trademark Phil way, involving overcompensation and ducks. 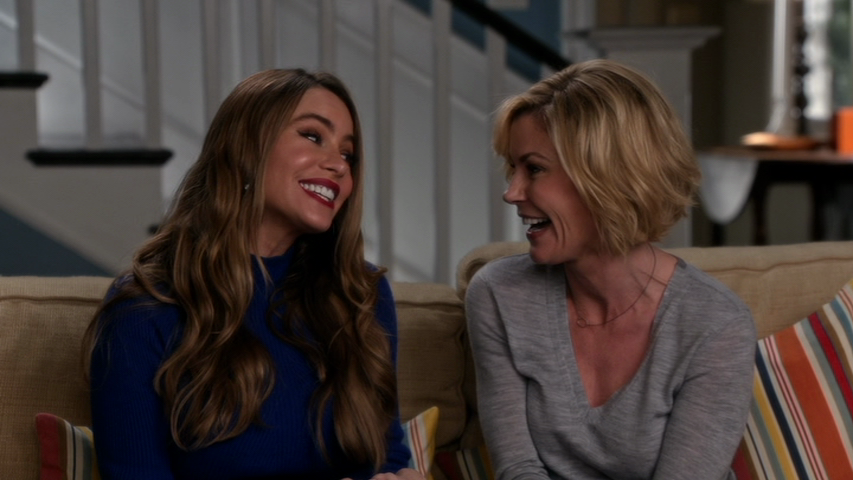 Cam (Eric Stonestreet) and Mitch (Jesse Tyler Ferguson) don't have any major story arc this season, as there are no major milestones for them. Instead, there are smaller plots involving them being blackballed from weddings and trying to throw a perfect birthday party for their daughter Lily, while renting out their upstairs apartment brings an assortment of strange characters into their lives, including a Christian rock band, a bizarre and suspicious trio (featuring Steve Agee) and some Canadians. As with many couples with a young child (that they care about), their lives revolve around their kid, so this makes a great deal of sense.

Meanwhile, the kids, who really aren't kids anymore, are all having their own adventures, which usually wind up involving the rest of the family, whether it's Luke (Nolan Gould) and Manny (Rico Rodriguez) and their quest to meet girls, Alex (Ariel Winter) and her travails at college or Haley (Sarah Hyland) and her journey toward adulthood. It's the last one that ends up being the most entertaining, largely due to the involvement of her would-be flame Andy (Adam DeVine). DeVine, playing a naive good-guy is a great foil for Hyland's Haley, and their courtship is rather satisfying, with some good twists along the way.

No particular episode stands out this season, but there are enjoyable moments throughout, and some great guest stars, like Keegan Michael Key and Catherine O'Hara. Though anything with Joe threatened to be saccharine, for the most part, this was a solid, steady and entertaining season. 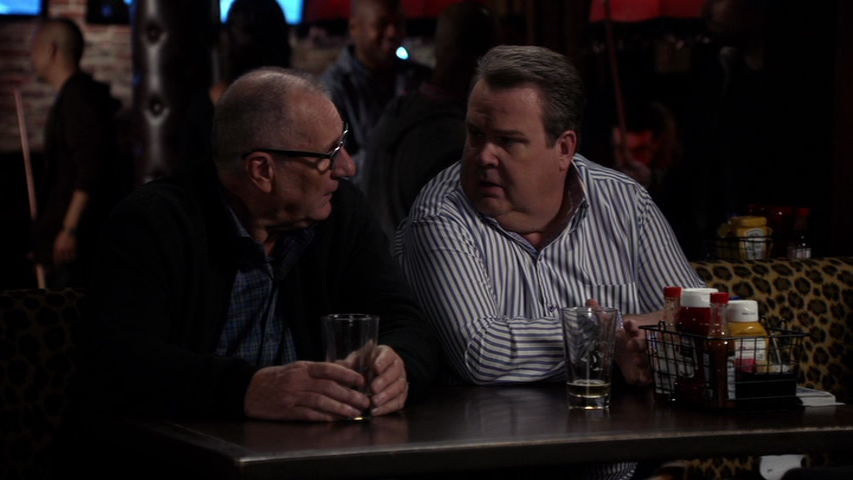 The Discs
The 22 episodes of the seventh season of Modern Family are spread across three DVDs, which are packed in a clear standard-width keepcase with a dual-hubbed tray. Though the discs auto-start, the animated menus features options to play all the episodes, select shows, adjust the setup and check out the extras (if applicable). There are no audio options but subtitles are available in English SDH, Spanish and French.

The Quality
Though only standard definition, these anamorphic widescreen transfers deliver appropriately saturated color and skin tones, while the level of fine detail shines in all the texture in the show's production design. Despite some aggressive packing (with 22 22-minute episodes over three discs), digital distractions aren't an issue.

The Dolby Digital 5.1 tracks come alive mainly during the show's active theme song, leaving the center channel to handle the brunt of the work during episodes, with dialogue mostly heard front and center. The surrounds get some work with atmospheric sounds (particularly during more public scenes), but otherwise, voices are the key element.

The Extras
The bonus content for Modern Family DVDs continues to be sparse with this release. First up is an extended version of "Thunk in the Trunk", which adds pretty much nothing of consequence. In fact, watching the two cuts in close proximity didn't help make the differences obvious.

" Storming the Set: The Making of an Episode" (5:22) features producer/writer Danny Zuker, as he walks you through the preproduction of the show, including a look at the series' offices, the writing process and the inspiration for the storylines. Zuker is an entertaining guy (as any of his Twitter followers can attest to) and he enhances this behind-the-scenes tour.

There are 13 deleted/extended scenes to check out, running 6:32 in all. Most of them are minor changes, but a few scenes with Haley are worth checking out.

"Growing Up Modern Family" (5:14) looks at how the kids have changed over seven years of doing the show, focusing on Winter, Gould and Rodriguez. Using clips from early in the series, it really shows how they have changed and talks about how they relate to their characters and their connection with the actors playing their parents.

"Kids in the Spotlight" is tangentially related to the series, focusing on Rodriguez' support for an organization encouraging foster kids to get into movie making. Burrell and Gould appear as well, as they take part in an award ceremony for the kids.

The last extra is a 7:11 gag reel, which hits all the usual standards, like dancing, screw-ups, and general goofiness. There's nothing wrong with it, but it feels a little light on laughs. 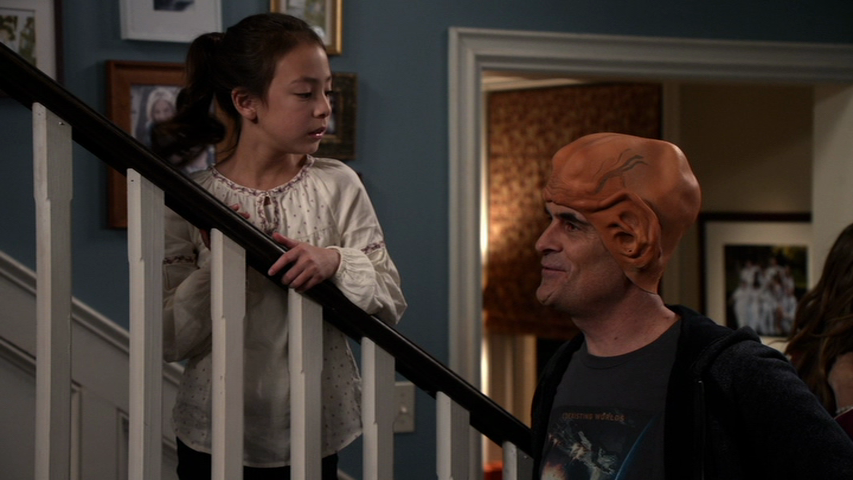 The Bottom Line
Seven seasons in, Modern Family remains one of the tightest-written sitcoms on network TV, with excellent wordplay and intertwined plots that leave none of the show's large cast on the sideline for long. Some elements show the effect of being a long-running sitcom, like the addition of a potential Cousin Oliver, but the show remains reliably enjoyable. The DVDs look and sound solid, with some limited extras to check out, making owning them a matter of whether you want to revisit the CEO Claire era.