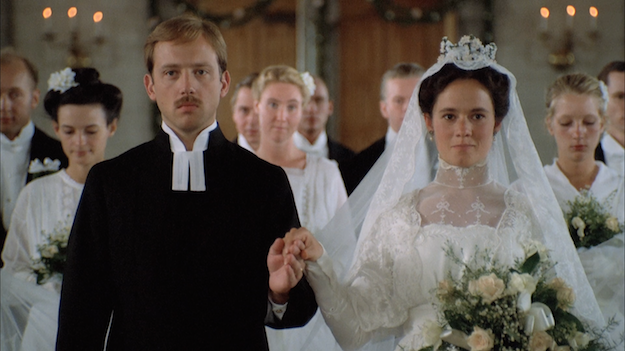 Written by Ingmar Bergman and directed by Bille August, the 1992 Palme d'Or winner The Best Intentions is an intense and moving family drama, as only Bergman could construct it. Trimmed to three hours from an original 5 1/2-hour Swedish miniseries, the film portrays a tumultuous romance modeled after that of Bergman's own parents (the film ends shortly before his character is born).

Henrik (Samuel Fröler) is a poor priest-in-training who, in the first scene of the film, stubbornly refuses an offer from his grandfather to receive money for making amends with the grandmother who has spent years shunning Henrik and his mother. From this first moment, it is apparent that Henrik is bold, principled, and unwaveringly prideful. He is matched in these respects by Anna (Pernilla August, who won Best Actress at Cannes for this role). The sister of Henrik's friend, Anna is a wealthy and sheltered young woman whose beauty and passion for living immediately captures Henrik's heart.

But things aren't so simple. Henrik is already engaged to a waitress named Frida (Lena Endre), with whom he frequently shares his shabby bed. Even though Henrik is honest enough to tell Anna about his prior engagement, he doesn't have the courage to break it off with Frida. Anna's mother Karin (Ghita Nørby) hates the idea of her daughter being seduced by a commoner, so she tries to continue to discredit Henrik and run interference on their burgeoning romance.

In lesser hands, this sort of set up could play out as soapy melodrama, but Bergman's script is interested in listening to these characters relate to each other and seeing how their conversations reveal the unusual facets of their respective personalities. Karin's antipathy toward Henrik would make her a cut-and-dry villain in most films, but here we see the logic -- and even the love -- behind her actions at all times.

Bergman regular Max von Sydow plays Anna's ailing father, Johan, and despite the high caliber of the cast in general, he still manages to steal the show. Whether idly delighting in the company of his daughter, interrogating his potential son-in-law about his dedication to religious doctrine, or feebly begging his wife not to read a letter that Anna wrote for Henrik, von Sydow is captivating, commanding our attention simply by existing. Apart from the warmth and kindness with which he invests his character, it's hard to pinpoint what's so mesmerizing about von Sydow's performance here; maybe the seamlessness is the major appeal.

In the second half of the film, Henrik and Anna begin on their journey together as a married couple. Henrik is placed as a pastor in a small rural community, and Anna uses her medical training as a nurse to help out their neighbors as well. There are moments of joy -- such as the birth of their first son, Dag -- but many more moments where Henrik and Anna butt heads, their individual stubbornness and class differences helping to add fuel to their sometimes quite violent arguments. Although Bergman's script doesn't let Anna off the hook for being selfish and snobby, she appears as more sympathetic than the often withdrawn and intermittently abusive Henrik. Pernilla August's open and sensitive performance as Anna also makes it easier to hook into her character.

The Best Intentions is a lot grimmer than your typical movie romance, but the way it refuses to gloss over the hard work that goes into a lasting long-term relationship, and the way it avoids painting any of its characters as all-good or all-bad, makes it more resonant than your average romantic movie as well. 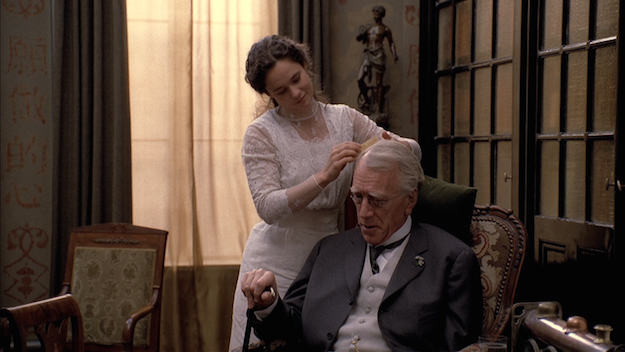 The Blu-ray
The Best Intentions disc is packaged with a color booklet featuring an essay by historian Peter Cowie.

The Video:
Apart from a few isolated specks on the original film element, this AVC-encoded 1080p 1.78:1 transfer is flawless. Excellent clarity and film grain resolution. The color palette relies heavily on nostalgic beige-y browns, but the reproduction of those colors here is saturated and lifelike. The transfer also offers full range of contrast with strong shadow detail.

The Audio:
My initial reaction to the audio is that it features surprisingly thoughtful and layered sound design, with the ambient sound effects often subtly underscoring the drama during quiet moments. They aren't distracting, but while I re-watched some passages from the film, I gradually began to appreciate how intricate the "background" soundscapes are and how they "invisibly" impact the tone and drama of the scenes they support. However, when examining the technical specs, I was bummed out to discover the only option is lossy Swedish Dolby 2.0 stereo audio (with optional English or French subtitles). As usual, I'm knocking a star off of my grade for the lack of a lossless option.

(HD, 14:13) - A photo scrapbook montage, scored to music by Käbi Laretei, that Ingmar Bergman created in 1983, as a tribute to his mother. It's very simple, but strangely hypnotic and affecting. Because the main feature is so emotionally exhausting, I almost think it is worth savoring this short either before you begin The Best Intentions or in a different sitting altogether.

Final Thoughts:
The Best Intentions shows that, beyond his reputation as a great director, Ingmar Bergman is hands-down one of the cinema's finest dramatists. Bille August does a beautiful job realizing what is clearly a personal story to its author, while the actors wring every little bit of complicated humanity out of their characters. Highly Recommended. 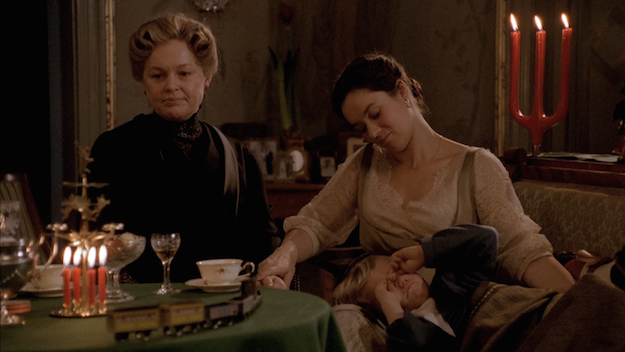