King of Pigs, The 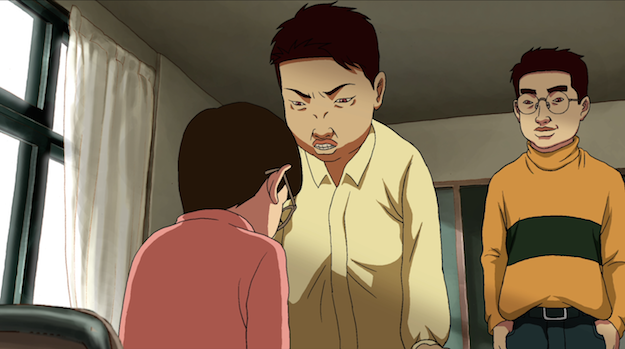 Director Yeon Sang-ho made a splash this past summer with his live-action feature debut, Train to Busan, a zombie outbreak film that topped the South Korean box office upon release and has stuck it out in select US theaters for nearly four months. Train to Busan is the kind of thrillingly creative genre exercise that is guaranteed to live on for decades among cult film lovers. No doubt expecting new interest in Yeon's earlier work, Olive has just released Blu-rays of the director's first two animated features.

However, anyone coming to Yeon's 2011 debut, The King of Pigs, hot on the heels of watching Train to Busan is going to be in for a shock. In contrast to Train to Busan's essentially humanistic and optimistic point of view, The King of Pigs is a dark, uncomfortable wallow in the psychology of a handful of nasty, twisted characters -- who all happen to be in middle school. The film takes a fatalistic look at the hierarchy and power structures that exist within a single classroom, presumably as a microcosm of society, and offers little room for hope.

At center of the film are Jong-suk and Kyung-min, who are low-status outcasts within their class. Kyung-min's family has more money than Jong-suk's, but that doesn't mitigate the fact that Kyung-min is a glasses-wearing wimp whose dad is wealthy only because he runs a whorehouse. Kyung-min gets taunted and fondled by the bigger, richer kids just as consistently as Jong-suk, whose family's poorness gives him an enormous chip on his shoulder. After getting jumped by a large dog on his way to school, Jong-suk begins to view the bullies who run everything as "dogs," while he and Kyung-min might as well be "pigs."

When the status quo is challenged, the rebels are typically beaten down without mercy. A new kid transfers into the class from another school and momentarily seems able to transcend the hierarchy, but it only lasts for a few days. The bullies manage to taunt the new kid into a fight, and as soon as they get him on their brutal level, they are able to make him submit. However, there is another student in class, Chul, who is able to trade licks with the bullies and refuses to stay down when they try to retaliate. Kyung-min and Jong-suk become Chul's friend out of gratitude, and Jong-suk dubs him "The King of Pigs," but it doesn't take too long for Chul to reveal himself to be a nihilistic psycho who extols his philosophy while having his new pals take turns stabbing a stray cat to death.

The story is framed by a meeting between adult versions of Kyung-min and Jong-suk, in their late 20s, reflecting on their relationship to the bullies and to Chul. Clearly, the passage of time has done nothing to heal the trauma these events have had upon their souls. Both of these men are failing in their careers -- Kyung-min as an entrepreneur and Jong-suk as a writer -- and they take it out by brutalizing their poor spouses. Writer-director Yeon is not nihilistic like his characters, but as he gradually fills in their psychology and their character arcs, he never hedges his bets by making them plainly likable. Even though Jong-suk is essentially the film's protagonist, he is no less a monster than his tormentors or his friends. We constantly see him confront the seemingly insurmountable brick wall of poverty, which gives his attitudes and actions a motivation but never provides an excuse for them. Also, Jong-suk's face is frequently drawn as a confluence of unflattering angles and ridges, making it hard to frequently stomach looking at the guy.

And yet, despite the despicable nature of his characters, Yeon Sang-ho makes The King of Pigs consistently compelling through sharp characterizations and through careful revelations of unexpected plot details both in the past and present. There's not much hope at the end of this tragedy, but once Yeon lays down all his cards, he leaves room for ways in which this all could be avoided. 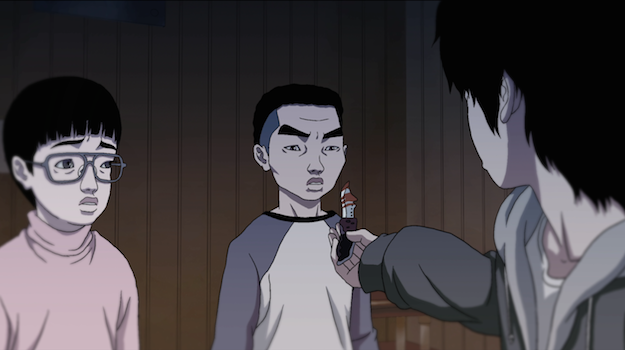 The Video:
Clean, crisp visuals, with strong, distinct lines. This AVC-encoded 1080p 1.78:1 transfer delivers the film in all its vibrant, unsettling glory. There is some banding during fade-ins and -outs, as well in certain shots where the light drops off into shadow. However, I noticed this same thing throughout The Fake, the other Yeon Sang-ho film that Olive is releasing, so I wonder if it originates from the way the film's animation was originally rendered, rather than the way this disc was encoded.

The Audio:
The Korean DTS-HD MA 2.0 stereo audio (with optional English subtitles) is clean and clear, but not particularly layered or showy. A handful of instances where characters were screaming loudly came out slightly distorted on my set-up.

(HD upscale, 15:11) - Brief talking heads with the director and four members of the voice cast, discussing the process of making a low-budget animated feature in a country that doesn't really have an animated film industry.

Final Thoughts:
The King of Pigs is an emotionally draining, unsettling watch. It offers anger and pain, but pretty much no catharsis or redemption. You have to be properly prepared to confront what the film wants to show you, and if you think you can come to it on those terms, then King of Pigs comes Recommended. 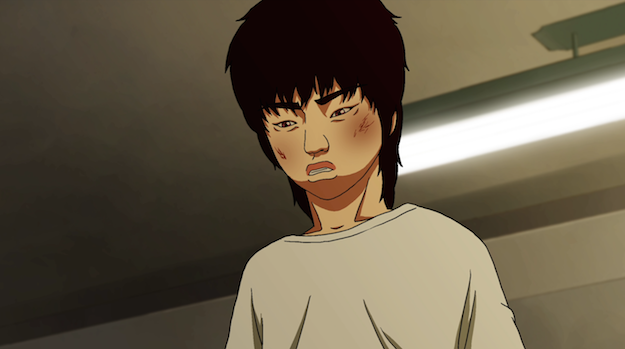