Sweeney Todd: The Demon Barber Of Fleet Street In Concert

Victorian literary character Sweeney Todd, whose story may or may not have been based on actual events depending on who you ask, is probably best known to American audiences through Stephen Sondheim's musical adaptation which was first performed in 1979. Done mainly as a dark comedy with songs that are operatic in style, the title character is actually the new name taken by Benjamin Barker (played in this version by stage and screen actor George Hearn), a barber in London who was sent to prison on false charges by a corrupt judge (Timothy Nolen) who then took custody of his daughter Johanna and led his wife to supposedly poison herself. The play begins as Barker returns to London having escaped prison, hoping to reconnect with his family but is shattered when he hears of their fate. He's soon befriended by Mrs. Lovett (Patti LuPone) who runs a meat pie shop downstairs from his former barber shop, which he soon re-opens. He soon plots his revenge against the judge, finding that "the closest shave he ever gave" is an easy way to slit someone's throat- and finds plenty of other folks deserving of this besides the judge. And what to do with the bodies that inevitably pile up? Well, Mrs. Lovett finds them to be a perfect solution for the shortage of meat and sees a huge increase in business for her better-tasting pies! "What happens then? Well, that's the play and we wouldn't want to give it away!" 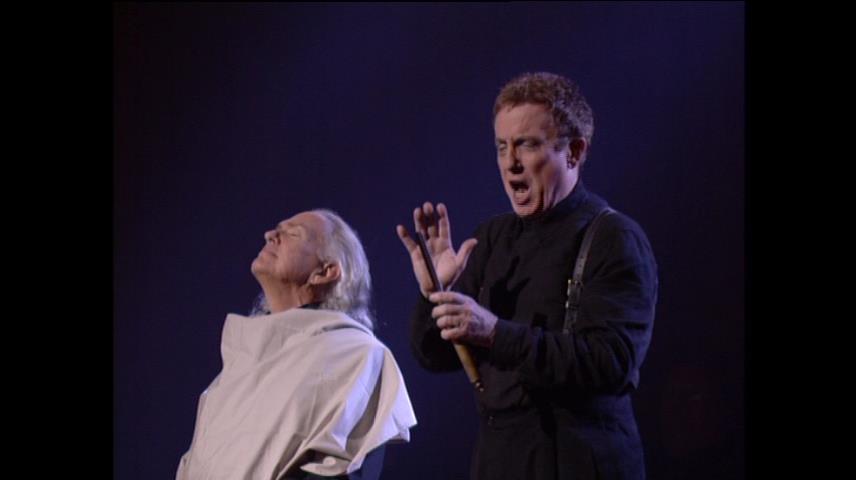 Shout! Factory launches their new Shout Broadway imprint with a rather odd choice for a Blu-Ray release, as this production of "Sweeney Todd" was shot on standard-def video and previously released on DVD by Image Entertainment. It was performed at the Louise M. Davies Symphony Hall in San Francisco, with Rob Fisher conducting the San Francisco Symphony. The execution is rather interesting, as it's staged as both a concert and stage play at the same time, with the orchestra set up prominently on the stage in full view with a bit of space for the actors to also perform without interfering with each other. The viewer must be willing to use their imagination a bit here especially if they aren't too familiar with the story- there are no scenic backdrops and the actors use a minimal amount of props, often pantomiming their actions. The performance works quite well if the viewer is willing to accept that, as you get the benefits of watching the orchestra perform along with the acting and singing by the cast. (Tim Burton's 2007 movie version is a more straightforward telling of the story, although it omits the main theme "The Ballad of Sweeney Todd.") All of the performers have a brilliant stage presence, singing very loud and clear and the audience has a great time as well, laughing at all the right moments. Neil Patrick Harris appears (with a surprisingly brilliant singing voice) as Tobias, an orphaned boy who is taken in by Mrs. Lovett and eventually helps with the pie-making unknowing of their contents.

This video presentation was shot with multiple cameras, featuring many cuts and dissolves. Overall it captures the stage show well, although the camera operators take a bit of artistic license for dramatic effect by quickly zooming into the background behind Todd as he makes his kills onstage, leaving the viewer to imagine something a bit more sinister than the likely bloodless, pantomimed deaths the theater audience saw. 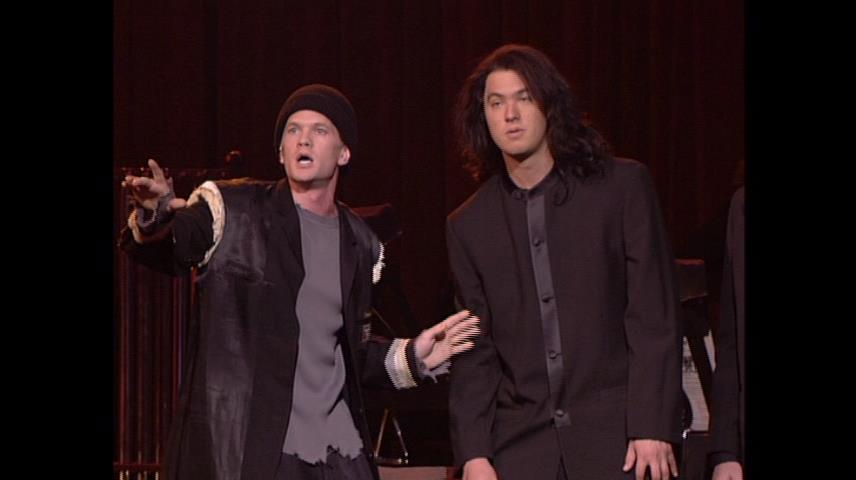 As this was shot on standard-definition video in 2001 (a curious decision itself, being that high definition was becoming standard by then), this Blu-Ray release is not much of an improvement over the previous DVD. There are two viewing options: the original 4x3 presentation in MPEG-2 format (which the pictures here were taken from) or a 16x9 cropped version upscaled to 1080i in AVC. The 4x3 presentation looks a hair better than the older DVD, with fewer compression artifacts although resolution takes a bit of a hit as it's a 16x9 frame with black side bars rather than the true 4x3 frame the DVD had. The upscaled cropped version is watchable, but mostly just magnifies the low resolution of the source material and some close-up shots of the actors' faces look a bit too close. 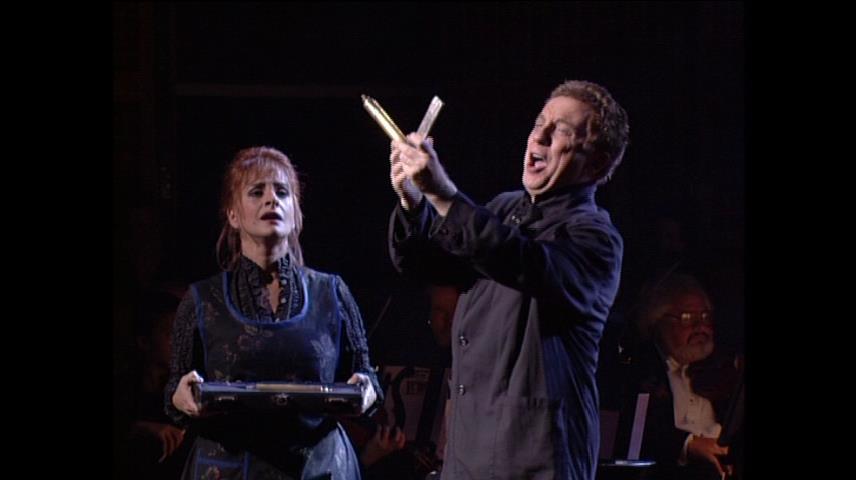 The DVD included a 5.1 mix in both DTS and Dolby Digital, and it would seem that the main advantage of releasing this on Blu-Ray would be to include that in uncompressed or lossless sound. Sadly, this disc only includes a 2-channel mix in DTS Master Audio. While it certainly sounds fine with Pro-Logic decoding, it's still a step down from the multichannel mix found on the DVD. The Blu-Ray at least does include English subtitles, which the DVD lacked.

A "making-of" piece is included, but it's cut down to 11 minutes from the 25 on the DVD, in addition to being cropped to 16x9. Stephen Sondheim talks a bit about how he came up with the idea of adapting Sweeney Todd into a musical and there is some rehearsal footage with actors talking about their characters. There's also a short trailer for Shout's release of "Gypsy" with Imelda Staunton, which was actually shot in high definition. 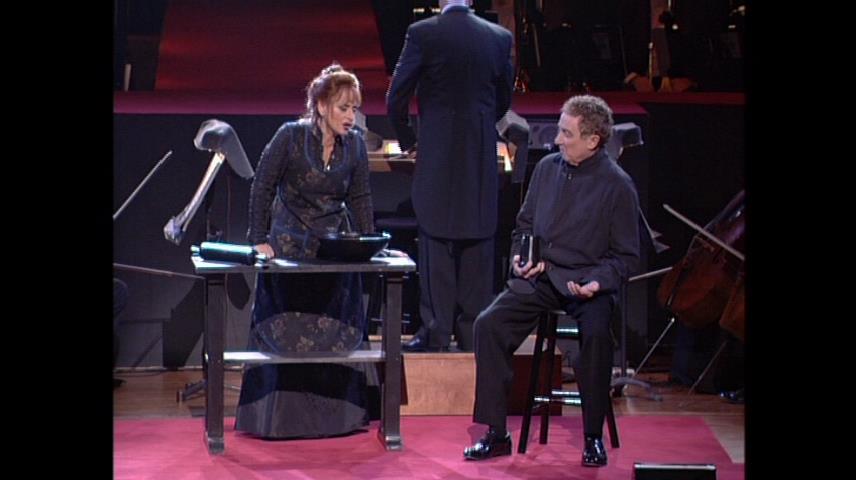 Watching Broadway shows at home is usually a treat, since I rarely have the time or money to attend actual live performances. This release of "Sweeney Todd" is recommended for the performances and the show itself, but if you already have the DVD then this is one double dip you can skip as the picture improvement is negligible and the sound is actually a downgrade. It's quite strange how this can be released on Blu-Ray while there have been a number of recent shows and movies released only on standard DVD.