Universal // Unrated // August 30, 2016
List Price: $44.98 [Buy now and save at Amazon]
Review by Stuart Galbraith IV | posted November 8, 2016 | E-mail the Author
Chicago Fire (2012-present) returns for a fourth season, its run now inexorably tied to executive producer Dick Wolf's vast television universe. There have been crossover episodes with Law & Order: SVU, while the series has itself inspired two spinoffs, Chicago P.D. and Chicago Med. Characters from those shows turn up in almost every Chicago Fire episode, and this season on Chicago Fire there's a three-episode story arc spanning all three shows.

Chicago Fire itself remains interesting but is already starting to feel a little tired, with storylines from its first three years reworked with minor variations: characters with jobs on the line from IAD, the Internal Affairs Department (which had already been milked dry on SVU to seemingly every character on that show at one time or another); a rescue worker becoming too personally involved with a victim; a firefighter losing his edge and running the risk of throwing away his career due to personal demons; the "one big family" rallying around a fallen comrade or pooling their ingenuity and resources to protect a local landmark or help out a down-on-his-luck neighbor.

In one sense Chicago Fire is a victim of its own likeability. The characters are all brave and intensely loyal to Firehouse 51 and to one another. They're selfless and treat one another like blood siblings, and in one early episode a visiting character can only express his awe in light of all this camaraderie to the station's Chief Boden (Eamonn Walker). By contrast the characters of Chicago P.D. are much more troubled and even morally ambiguous, and hence more interesting.

But there's no denying the show's incredible production values, which are on a feature film scale a hit series even ten years ago could scarcely have dreamed of, with budgets of probably no less than $3-4 million per episode.

Universal's DVD set includes all 23 Season Three episodes ("uninterrupted," notes the packaging), as well as crossover episodes from Chicago PD and Chicago Med, and behind-the-scenes featurettes for most every episode. The transfers are up to contemporary standards, showing off this handsomely produced show well, and the DVD includes lots of extra features. 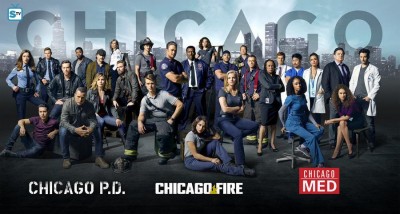 Dick Wolf's TV universe is getting a little crowded.

The series resembles forerunners like Emergency! in that Chicago Fire typically centers around two big set-pieces, often one major fire and one smaller scale but equally harrowing rescue operation, emergencies presenting unusual and/or dangerous accident scenes, often freak accidents. The first two seasons stuck to this formula pretty closely but veered more and more away from this during Season Three, as well as move away from its over-the-top predilection for firemen (and paramedic women) constantly stripping down for hot steamy sex scenes. And, like most television drama these days, there's usually a darker "A" story complementing a slightly lighter "B" story, often involving the veteran firefighters and their hapless business ventures and love lives. Some plots are self-contained within a single episode; others are arced over many episodes or even the entire season.

There are six major characters and myriad supporting and recurring ones, not to mention all the crossover folk. Lt. Matthew Casey (Jesse Spencer) is the no-nonsense leader of Truck 71, now permanently ensconced (so it would appear) with paramedic-turned-firefighter-turned pregnant arson investigator Gabbie Dawson (Monica Raymund). Casey and Gabbie share about equal screentime with Lt. Kelly Severide (Taylor Kinney), of Rescue Squad 3.

Early seasons of Chicago Fire depicted Casey as the internally tormented of the two, while ladies' man Severide was more affable and easy-going, while a crack rescue worker when the chips are down. Casey's endless hardships teetered toward simply grating and annoying by the end of season two, and the show's writers shifted a lot of that millennial angst over to Severide. But rather than give Casey a well-deserved rest, now all three characters seem to be struggling with myriad personal problems.

All this shifts a bit of the focus away from the older and, frankly, much more interesting characters of Senior Firefighter Christopher Herrmann (David Eigenberg), firefighter Otis Zvonecek (Yuri Sardanov), and firefighter Randall "Mouch" McHolland (Christian Stole). These guys and their back stories are always compelling but, one suspects, Wolf and/or the network may have mandated more screentime for the younger, more conventionally attractive characters, even when that means slighting the older ones, an issue that also seemed to plagued Law & Order: SVU with its underuse of its veteran supporting actors.

Twenty-eight 42- to 43-minute episodes (including the crossover shows) are spread across six single-sided, dual-layered discs. The 1.78:1 enhanced widescreen shows look quite good, up to contemporary television/video standards, and the Dolby Digital 5.1 audio is, expectedly, quite lively and full of oomph. Optional English SDH subs are available, and the discs are region 1 encoded. A 5.1 Spanish-dubbed track is also available. <

Chicago Fire remains enormously compelling but, at least based on a viewing of the first third or so of the season, seems to be visiting the same wells again and again, with too much focus on some of the less interesting characters. Highly Recommended.