Universal // Unrated // September 13, 2016
List Price: $44.98 [Buy now and save at Amazon]
Review by Stuart Galbraith IV | posted December 1, 2016 | E-mail the Author
Chicago P.D. (2014-present) steadily improves as it enters its third (2015-16) season. Spun-off from Chicago Fire, and part of the same TV universe that now also includes Law & Order: SVU, Chicago Med (which debuted in November 2015), and the upcoming Chicago Justice (which began as a backdoor pilot on a May 2016 episode of Chicago P.D., the series is a bit edgier than Chicago Fire, with marginally more emotionally complex characters and dramatic situations. Though still morally murky in some respects, it's also undeniably compelling, slickly produced, and boasts a strong ensemble cast.

The program introduced star Jason Beghe (as the leader of Chicago P.D.'s intelligence unit, Hank Voight) as a morally reprehensible bully during a major story arc on Chicago Fire's first year. When P.D. debuted, scripts danced around this quandary, gradually transforming Voight from morally dubious to ambiguous to decent man of character who allows himself Dirty Harry-style shortcuts to circumvent plainly wrong (in Voight's opinion) loopholes that allow obvious criminals to roam free. Initially Voight was not unlike 24's repellent Jack Bauer (Kiefer Sutherland), whose ends always justified his means (including impromptu torture) because, well, all these people are obviously guilty as Hell anyway.

But the let's-a-confession-out-of-him policing has been dialed way back, possibly in response to the now-almost-daily reports of white police officers beating and sometimes killing predominantly African-American suspects who, in many case, have done nothing wrong at all. Dick Wolf's Chicago-based franchises, now four in number, doubtlessly bring untold millions into that city, and the City of Chicago no doubt has been bending over backwards to accommodate what must be the huge and disruptive production crews for these various shows when they're shooting on location. Chicago P.D., more than the other three shows, is soft-sell propaganda of a sort, in the same way pro-military movies of the fifties like Strategic Air Command were during the Cold War, or war movies starring John Wayne were to the first-half of the ‘40s and beyond. Where Law & Order: SVU remains enormously topical - despite its constant, often absurd disclaimers that its stories aren't based on real people and events - it has a meatier edge Chicago P.D. still lacks. Don't expect thoughtful think pieces on race relations. But in its third season it relies less on slam-bang, movie-scale crime cases and epic chases and shootouts than in the past, focusing a bit more on the troubled lives of the Intelligence Unit and related patrol officers. 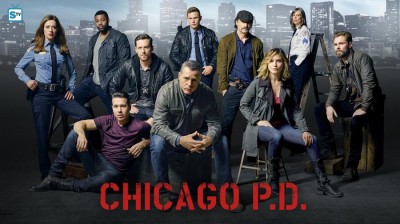 Though not necessary, it helps a lot if the viewer is able to synch-up Chicago P.D. with corresponding airdates on Chicago Fire and, beginning this season, with Chicago Med. Characters, typically at least one each from each series, appear on Chicago P.D. and vice versa. Sometimes these are inconsequential cameos, but at other times characters become an integral part of the story and oftentimes story arcs from those shows are referenced. It's complicated.

At the tight-knit Intelligence Unit of Chicago's police department, Sgt. Hank Voight is joined by straight shooter Det. Antonio Dawson (Jon Seda), the brother of paramedic Gabbie Dawson from Chicago Fire; Det. Erin Lindsay (Sophia Bush) whom Voight rescued from the gutter and raised as his own, sparking a contentious relationship with Lindsay's estranged mother (Markie Post); Det. Jay Halstead (Jesse Lee Soffer) a detective in a heretofore clandestine relationship with Lindsay and who is also the brother of Chicago Med's Dr. Will Halstead (Nick Gehlfuss; see, I told you it was complicated!).

Gung-ho Officer Adam Ruzek (Patrick John Fluegar) is a former police cadet recruited by veteran undercover specialist Det. Alvin Olinsky (Elias Koteas), who maintains a close relationship with Voight and shares some elements with Voight's dark past. Ruzek is engaged to former flight attendant but crack uniformed Officer Kim Burgess (Marina Squerciati). She was passed over for intelligence duty in favor of her quietly efficient ex-partner Kevin Atwater (LaRoyce Hawkins, at this point the show's only major African-American character). Her current partner is Officer Sean Roman (Brian Geraghty), who runs a private security business on the side and, in Season Three, is dealing with mysterious medical matters.

Finally, there's Desk Sgt. Trudy Platt (Amy Morton), whose withering glances and curt manner are the bane of the precinct.

As with Chicago Fire, Chicago P.D.'s production values are extremely impressive, the show resembling a polished contemporary film more than Dragnet or even NYPD Blue. (One guesses its budgets are in the $2-4 million/episode; the '60s Dragnet probably wasn't much more than $75,000/episode.) It's frequently tense and exciting, and the character interaction is always interesting.

As noted above, there's a bit more character-driven stories this season: Lindsay's troubles with her self-destructive mother ("She's a cancer for you. You know that!" insists Hank.); Olinsky's relationship with a teenage daughter born out of an undercover operation, which doesn't please his wife or older daughter, etc.

And, like Chicago Fire, the ensemble cast is good-to-excellent across the board, with Beghe, Seda, Morton, and especially Koteas standing out.

Twenty-three 42- to 43-minute episodes (including the crossover shows) are spread across six single-sided, dual-layered discs. The 1.78:1 enhanced widescreen shows look quite good, up to contemporary television/video standards, and the Dolby Digital 5.1 audio is, expectedly, quite lively and full of oomph. Optional Spanish audio, English and Spanish SDH subs are available, and the discs are region 1 encoded.

Though there's still a lot of room for growth, Chicago P.D. is generally impressive and, overall, Recommended.