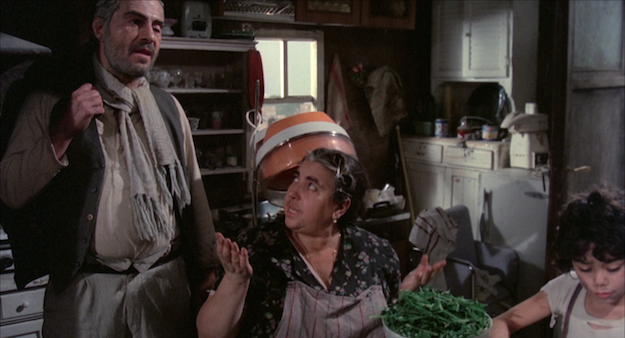 No one can make a false advertising claim against director Ettore Scola for calling his 1976 film Ugly, Dirty & Bad (original Italian: Brutti, sporchi e cattivi; aka Down and Dirty). A satirical slice-of-life, Ugly, Dirty & Bad portrays roughly two dozen irredeemable characters and a few good ones who are destined to wind up ruined by their circumstances. Scola's A Special Day was recently given a sterling restoration, released on Blu-ray by Criterion, and Film Movement's disc for Ugly, Dirty & Bad boasts similarly vivid image quality -- although Ugly's images are roughly one thousand times less sumptuous than those in A Special Day.

Nino Manfredi (Bambole) is Giacinto, the awful patriarch of an awful family, whose eighteen or nineteen members all live in the same shabby shack in a rundown shantytown not far from Rome. The men are thieves and hustlers, while the women are rewarded for their ability to keep house by being molested and assaulted by the men. One bizarre sequence involves one of Giacinto's sons, who makes his living as a transvestite hooker, taking his brother's wife from behind while she shampoos her hair and can't see which brother is having sex with her. The joke (if that word can even be used) seems to be that this woman can't even catch a break from being sexually hounded when the only man around her is (ostensibly) gay.

The first half of the film is quite shaggy and episodic, as it tries to cram in moments with each member of the family while also setting up how selfish and cruel Giacinto is. Recently flush with a million-lira settlement after he was blinded in one eye at work, Giacinto spends most of his time drinking, paranoiacally guarding his wad of cash, and finding new places in the crumbling house to hide the money from his devious relatives. Scola offers up plenty of striking details in this section, such as the way that all the children in the shantytown are locked in a pen to play during the work day, or the way that the family steals and divvies up the government pension sent to their Grandma (who is played by a man, Giovanni Rovini, by the way), but the vignettes quickly become one-note and tedious. If Scola had lost thirty minutes from the first hour of the film, it would arguably be more effective.

The energy picks up quite a bit in hour 2, when the plot of the film finally kicks in. Giacinto, who has been miserly with his million lira, suddenly falls in love with a fat, happy hooker named Iside (Maria Luisa Santella), and he decides he's going to bring her home to live with his wife and kids (and the rest). Then -- gasp! -- he starts spending all his money on Iside. The family decides their only recourse is to murder Giacinto, both as revenge for the way he is dredging the family honor through the mud and to, you know, finally take the remaining money for themselves.

There are some strong, shocking laughs in Ugly, Dirty & Bad, and some thoughtful moments too, but there are almost no sympathetic characters. That makes it a tough watch overall. Two vaguely likable characters who exist on the periphery of the main action -- Giacinto's 12-year-old granddaughter and a black single mother in the community -- both succumb to the bad, dirty ugliness that surrounds them before the credits roll, squashing any potential optimism that might not have soured in the two hours preceding. Nonetheless, it's a well-acted, well-made film, so if you think can swallow Scola's cynicism without succumbing yourself, then you just might find Ugly, Dirty & Bad worth watching. 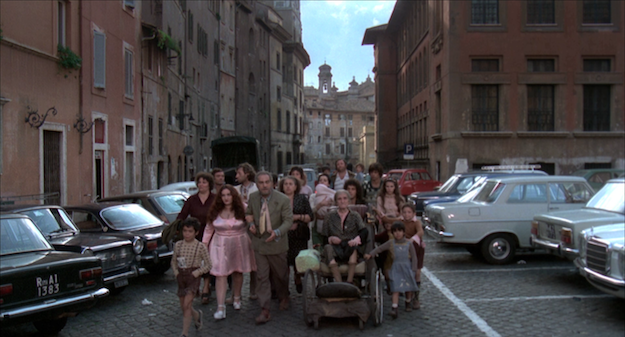 The Blu-ray
Ugly, Dirty & Bad is packaged with a color booklet featuring stills and an essay by Ronald Bergen.

The Video:
Presented in an AVC-encoded 1080p 1.85:1 transfer, the disc offers a pleasingly clean and vivid restoration of this 40-year-old flick. With a bitrate that hovers around 30 MBps, there are no noticeable digital compression issues. Wider shots tend to be soft on detail, but this appears to be due to the original film image and not the transfer. One scene features a brief appearance of light blotches on the film, but that was the only major flaw I picked up on.

The Audio:
The Italian LPCM 2.0 mono audio (with optional English subtitles) is understandable but fairly limited. It's not exactly muffled, and it's a good digital transfer so the sound never gets overmodulated, but overall it sounds kind of like you're listening to the movie on a small boombox. Once you adjust to it, the soundtrack works just fine with the film but it has a distinctly dated, lower-budget feel.

- Columbia film professor Peña offers a thematic reading of the film, and contextualizes it within the Italian filmmaking era after the neo-realist period. Sadly, the discussion seems to be light on research, as I was hoping for some background on the ensemble of actors, but Peña mostly just reacts to the film as it plays out.

Final Thoughts:
Ugly, Dirty & Bad is a cynical, satirical look at Italy's dirt-poor that offers some colorful characters, some laughs, and some food for thought. Still, the filmmakers focus so much energy on the characters' despicable behavior that it's hard to have very much fun. It's not a badly made movie, but unless you're absolutely predisposed to this kind of story, I'd say Rent It. 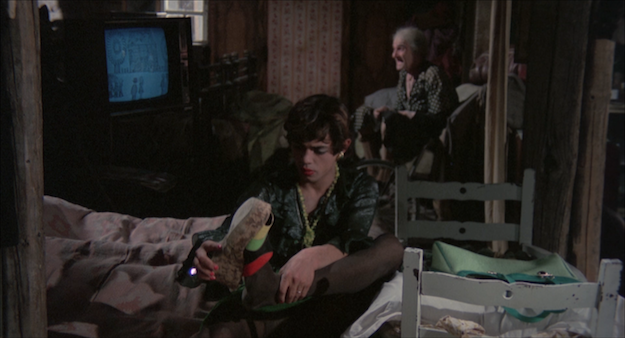