It's a hard task to create a grounded portrayal of a public figure, especially one as significant as the President of The United States of America. Traditional biographies of presidents always run the risk of either deifying or demonizing their subjects, losing the nuance, the one thing that makes someone human to begin with, in the process. It also becomes hard to fight the tendency to exaggerate some of the president's well-known mannerisms and speech patterns, turning the performance into a crude caricature. 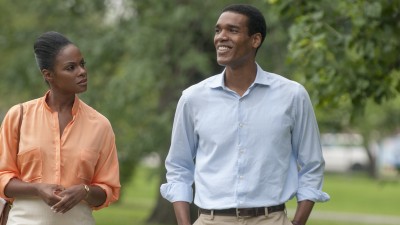 Perhaps because of the difficulty in capturing such a figure with appropriate humanity and empathy, films like Southside with You should be cherished. Writer/director Richard Tanne's notable first feature takes an unconventional approach to depicting our current POTUS, choosing to create a rather sweet and unassuming tale about the first date between Barack Obama (Parker Sawyers) and his future wife Michelle Robinson (Tika Sumpter) across Chicago in 1989. By focusing on the pre-presidency time period of the couple, we're allowed to see them as two driven yet regular young people who are gradually falling in love during the course of the day.

Tanne finds a delicate balance between depicting the distinct personalities and qualities of Barack and Michelle, where we see glimpses of the figures we've been so familiar with for the last eight years, and the relatable general awkwardness, confusion, and eventual joy that comes with going out on a first date with someone you're really into. This turns Southside with You into an equally specific and universal experience.

The film's simple and somewhat episodic structure, showing the couple move from one location to another while discussing their dreams, aspirations, and frustrations with life, is held together by impressively natural performances by the two leads. Sawyers captures the lesser seen loose and cool conversational side of Barack, while doing a formidable job mimicking his famously calculated, thoughtful, and inspirational delivery during a speech he gives in a church about finding funding for a community center. The scene is an example of how the two gears the film operates on is organically melded together: It establishes Barack as a natural leader, while keeping an eye on the romance angle of the story as it makes it clear to us and Michelle that perhaps he's also out to impress her.

For those of us who are familiar with some of the details of the date as told by Barack and Michelle during various humorous speeches they've given over the years, it's fun to see them in the film, like the fact that Barack's car apparently had a hole in the passenger side floor. That being said, Southside with You is not just Obama fan service, for lack of a better description, but a study on how two smart and driven people can find a deep connection that strengthens them as a whole. And we all know how effectively that connection worked. 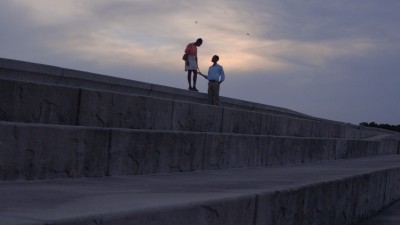 Southside with You mostly takes place in outdoor Chicago locations, where the greens of the trees and parks pop amongst the concrete grays of the city. The 1080p transfer captures these colors in vibrant fashion, enough to put the audience into that fateful day in 1989. The overall presentation is clear and crisp, without any noticeable video noise.

We get a DTS-HD 5.1 track, but don't expect much, since Southside with You is an understandably dialogue heavy experience. There's some surround presence during scenes with music, but the mix mostly sticks to the front channels. However, the dialogue is heard clearly and we get an overall clean track.

Commentary with Richard Tanne: The director switches between the details of the production and his research regarding how the date went in real life. Very informational stuff for fans of the film.

Southside with You sidesteps the usual expectations we might have about president biographies and presents a grounded and heartwarming romance revolving around two of the most famous people in the world. It's a unique experience, since we're definitely not getting a similar film about the upcoming president, unless YouTube unboxing videos count.