Lionsgate Home Entertainment // R // December 27, 2016
List Price: $24.99 [Buy now and save at Amazon]
Review by Tyler Foster | posted December 25, 2016 | E-mail the Author
Note: Although screencaps should only be considered an idea of what the disc looks like, click any capture in this review to expand the image to a full size .png. 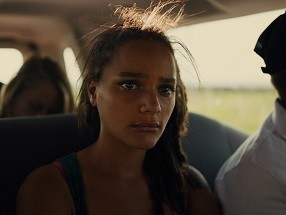 When we first see Star (Sasha Lane), she's digging through a dumpster behind a grocery store, looking for salvageable food. Her family situation is vague but complicated -- she watches over two younger children, Kelsey (Summer Hunsaker) and Rubin (Brody Hunsaker), who clearly belong to another woman, Misty (Chastity Hunsaker), but her relationship with Nathan (Johnny Pierce II), the older man in the house -- either an unwanted boyfriend, or more likely, a lecherous stepfather -- is clearly unhealthy, involving molestation or even rape. Her mother is dead. They live in one of those cheaply-finished and perpetually neglected houses one finds in lower-class American neighborhoods, with plastic-like paint chipping off the walls, carpets that stink of pet stains and cigarettes, and decor leftover from the design period between the late 1980s and early 1990s.

In another movie, this kind of backstory might be more crucial, a key to "explaining" Star or her point of view as the film arrives at a dramatic climax. For filmmaker Andrea Arnold, they're simply details that add up to form her verite style. As with her 2009 film Fish Tank, American Honey is not an overall conception or idea of the experience of being a teenage girl, living on the fringes of society, but more about individual moments, simultaneously capturing how they feel as they're happening while also conveying the way in which they'll be remembered. Both movies are turbulent, energetic, and even dangerous, with fleeting moments -- a glance, a touch, a particular point of view -- leaping off the screen with incredible emotional precision.

Although Arnold has made other films, including the Emily Bronte adaptation Wuthering Heights and the CCTV thriller Red Road, Fish Tank and American Honey feel like two of a kind, about two similar young women separated by the Atlantic Ocean. Star is not as rebellious as Mia, but they are similarly captured by the rough-hewn magnetism of handsome men. In Star's case, that man is Jake (Shia LaBeouf), who she first encounters singing along to Rihanna's "We Found Love", surrounded by co-workers. 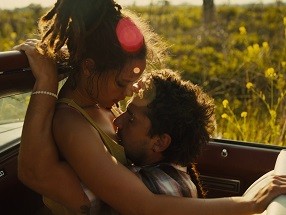 It turns out Jake is one of the people in charge of a "mag crew," which goes door to door all across America trying to sell magazine subscriptions. Star, tired of being responsible for children that aren't hers and attracted to Jake, leaves the kids with Misty and joins the crew. The one person above Jake (while also possibly sleeping with him) is Krystal (Riley Keough), a tough and uncompromising manager who has no patience for excuses when it comes to her crew not making money, and seems to suspect Star's attraction to Jake.

Although the film follows the ups and downs of Star's experience learning the ropes and her relationship with Jake, the development of the story only serves to further the development of Star as a character, a journey defined less by changes and more by complexity. Arnold observes as her naivete transforms into experience and understanding, her handheld camerawork hovering and shifting in and out of focus, occupying a gray area between POV and a traditional third-person perspective. It would be most accurate to say that while Arnold isn't showing us the character's actual perspective, she's capturing a more subjective idea of what the moment feels like for Star. At other times, Arnold's style feels almost documentary-like, such as when Star climbs into the cab of a truck driver and talks to him about his children as he travels to his next stop. Although the film constantly jumps back and forth between these slice-of-life segments and sequences that have a traditionally narrative feel to them, American Honey remains cohesive and real.

Although Arnold's style is distinctive and extremely striking, it's hard to imagine what the film would be had she not discovered Sasha Lane, whose debut performance carries the 162-minute movie with ease. She's incredibly vulnerable and stunningly naturalistic, and Arnold allows her free reign to be antagonistic and frustrating. Given we can see Star's attraction to Jake, one might expect her to take his first lesson in how to sell a subscription very seriously, but she cops an attitude, pushing back against practices she considers unethical. In another wonderful scene, she becomes so fed up with Jake that she abandons him for a trio of cowboys (Will Patton, Daran Shinn, and Sam Williamson), who provide her with Mezcal and challenge her to drink the worm. Given the audience has no familiarity with Lane as a performer, it's easy to forget she isn't a real person, even with more recognizable stars LaBeouf and Keough sharing the screen with her. LaBeouf acquits himself nicely in a role that makes good use of both his charisma and his attitude, balancing his charm with his anger. 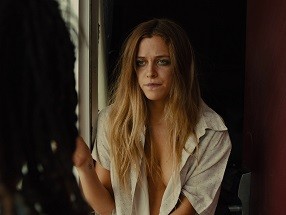 Those who go into American Honey expecting a traditional narrative will likely find themselves struggling with the movie, which, like Star, is impulsive and moves forward based on instinct. It's a road trip movie in the purest sense, in which the journey is more important than the destination, and in its vibrancy and messy authenticity, one of the year's best films.

The Blu-ray
American Honey swaps out its superior theatrical poster art (of Lane against blue skies, arms outstretched) for more conventional artwork featuring her and the more recognizable LaBeouf in a near-embrace. The one-disc release comes in a standard Viva Elite Blu-ray case (non-eco!), and there is an insert inside the case featuring an UltraViolet Digital HD copy code.

The Video and Audio
Presented in 1.33:1 1080p AVC (formatted with black bars on the left and right for widescreen televisions) and with a DTS-HD Master Audio 5.1 track, American Honey gets a great presentation from Lionsgate. The film has a specific type of natural color palette -- when colors are described as "natural", what is traditionally meant is "lush", an idealized version of reality where trees are always green and the sun is yellow and waters are blue. American Honey's look is "natural" in an unfiltered sense: parking lots during the early morning appear sort of harsh and white, bright sunlight causes certain areas of the screen to bloom, and light when moving from outside to indoors fluctuates in a way that one naturally expects, without the benefit of Hollywood lighting. The image is detailed but has a pleasurable film-like softness, and there is a richness to the contrast and the way the image looks overall that suits the tone of the movie. Sound is very natural, reflecting the cramped echoes of the inside of a van or the living ambiance of a bug-filled summer field, with bits of score as an occasional backdrop. English captions for the deaf and hard of hearing and Spanish subtitles are also included. 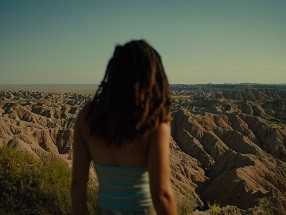 The Extras
Sadly, there is only one bonus feature, and it's a short one: "Sasha Lane and Riley Keough on American Honey" (6:20) is a brief, clip-filled piece filmed during the press tour, which contains a few interesting but all-too-brief soundbytes from the two actors about how they came to be involved with the film. The featurette includes footage from the end of the movie as well, so if you're one of those strange people who watches extras first, be warned, this contains spoilers.

Trailers for Moonlight and 20th Century Women play before the main menu. No trailer for American Honey is included.

Conclusion
Those who enjoyed Arnold's Fish Tank will find a similar yet still refreshingly unique in American Honey, anchored by Sasha Lane's knockout debut performance. Those who prefer the anchor of a traditional set-up and pay-off structure (not a pejorative!) will likely struggle with the film's sense of aimlessness and length, but those who can relax into the mood the moment will be greatly rewarded. Highly recommended.