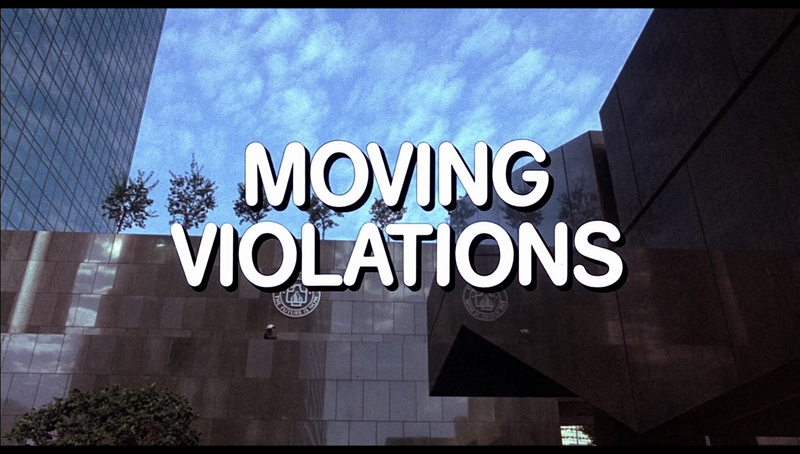 
The Movie
Moving Violations makes an appearance in a vague movie memory from my childhood. While it's unlikely I would have known its connection to Police Academy, with which it shares its writers and director, it would be hard to miss the connection, as it shares the same rhythms and structure: a group of ne'er do wells are forced by the legal system to attend training in order to avoid further punishment. In this case, it's traffic school, not the police academy, and the mean instructor Halik (James Keach) is more psychotic than egomaniacal, but the concepts and energies of the films are pretty similar.

Instead of Steve Guttenberg as our wise-acre hero, we get Bill Murray…'s younger brother John, who plays Dana, a nursery owner busted by Halik when he drops his apple out of his truck window while driving. He soon joins a motley crew of driving students, including a nerdy puppeteer (Brian Backer, Fast Times at Ridgemont High), a car mechanic (Fred Willard), a hypochondriac (Wendie Jo Sperber) and a ditzy rocket scientist (Jennifer Tilly). Murray has a bit of a look like his brother, and the voice is similar, so it's easy to see what the filmmakers were thinking when they cast him, allowing him to join the illustrious ranks of celebrity not-really-lookalike siblings like Don Swayze and Frank Stallone.

The thing is, Murray isn't bad as the leader of this rag-tag group, as they go up against Halik and the judge he's in cahoots with to pull off a big scam (Sally Kellerman). While he can pull off the wisecracks naturally, he's just always going to be compared to Bill, and he can't compete at that weight class. It's a shame, because the rest of the talented cast is pretty solid, including Nedra Volz, who plays a walking sight gag as a nearly-blind elderly woman, who earns far too many easy laughs, including scenes she shares with an overreacting Clara "Where's the beef?" Peller and a nutty sex scene that you will feel guilty for laughing at. 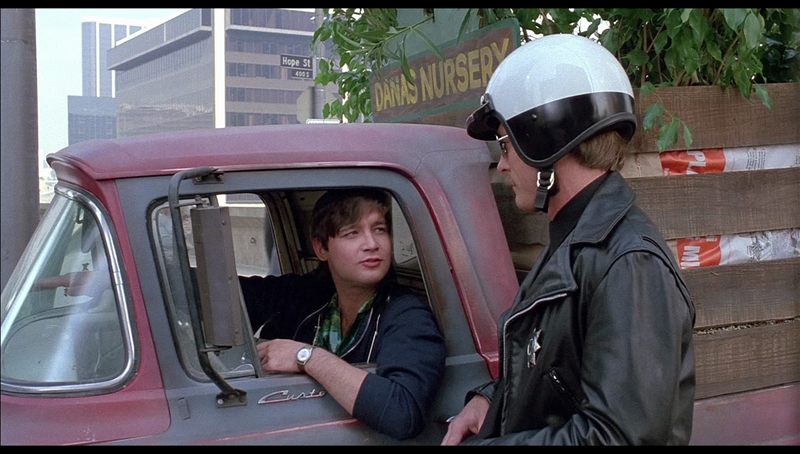 The film is loaded with way too aggressive broad comedy that almost dares you to laugh at it. The scene that introduces Sperber is built around forced gags that the Benny Hill wouldn't touch, while a pointless repetition joke actually gets recycled and used twice in the same movie (and not as a call-back). It all leads up to an utterly insane chase-scene finale worthy of It's a Mad, Mad, Mad, Mad World, that is impressive in its audacity (offering a little bit of everything), and also manages to be funny for one brief, shining moment, while also managing to be out of tone with the rest of the movie.

There's so much about this film that's overflowing in nonsense, with the plot living mainly on coincidences or whatever forwards the particular scenario it's serving up at the moment. There are a ton of characters, and the majority are one-dimensional, with no story arc of any kind, existing only to allow for a scene or two, like Sperber's hypochondriac, who is important for all of two scenes, neither of which serves the main plot in any way. As ridiculous (and, as a result, entertaining) as the ending is, the logic of how it plays out is non-existent. (Let's just forget about continuity, as it's also absent from this film, unless time can stand still and teleportation exists in this reality.)

The main issue with this film, besides the general lack of plot and the overall incoherence, is a lack of stakes. If the traffic-school students don't succeed, they don't get their licenses back and they lose their cars. Though obviously a situation no one wants to find themselves in, it's hardly the kind of thing a movie should revolve around. The pivot that occurs to set up the finale helps give the characters some decent motivation, but that's pretty late in the game for a 90-minute comedy. It's meaningless and silly, but not in a way that's going to put it in the class of a Police Academy. You just won't care enough about it.

Don't forget to keep your eyes peeled for the first feature-film role of one Mr. Don Cheadle, who has all of one line. There's was no guessing the greatness that lay ahead of him from this performance, but it all started here anyway. 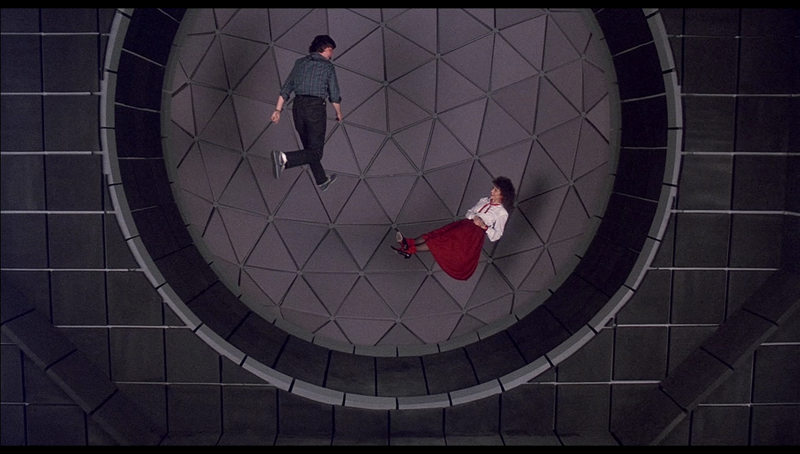 The Disc
Kino's Studio Classics line continues with Moving Violations, which arrives on one Blu-ray disc, packed in a standard keepcase with the film's painted poster art on the cover. The disc has a static menu with options to watch the film, select scenes, check out the extras and adjust the languages. There are no audio options, but subtitles are available in English.

The Quality
When you compare the 1080p, AVC-encoded 1.85:1 transfer on the film with the trailer included on the disc, the movie looks simply incredible. On it's own, it's not bad either, with solid, if occasionally dull color and decent, though not razor-sharp details, enough to easily make out the fabrics and accessories on the ‘80s fashions, though not exactly eye-popping. Night scenes (of which there are many) exhibit good black levels, Some jitter is evident in a few scenes, but dirt and damage are thankfully at the barest of minimums. The only real negative is the presence of noise in a few scenes, because no noteable digital distractions have been introduced. (Well, that, and how the clarity of the HD presentation reveals some things that old SD video would have left hidden, like the bra on Sperber's "nude" character in one scene.)

The DTS-HD Master Audio 2.0 track does the trick, keeping dialogue clean and crisp, and the sound effects, score and soundtrack appropriately powerful. Thanks to a focus on dialogue, nothing about the film requires particularly present sound, with the exception of the film's wacky finale, and what you get will more than satisfy.

The Extras
Watching the film for the first time in a long time, writer/director Neal Israel sits down for a commentary track carried over from the 2005 Anchor Bay DVD. Israel shares his memories of the production, some moviemaking trivia (like what happens to cars that are damaged in movies) and his comedic philosophies. While he does a bit of watching and observing, he also talks about the issues with bearing many similarities to Police Academy and what that did to audience reaction. 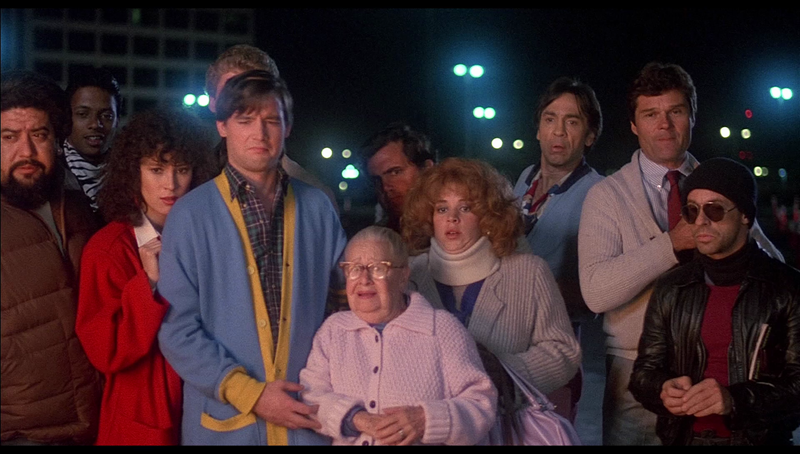 The Bottom Line
Moving Violations, despite the many name-brand acting talents on-board, feels like a knockoff of a better comedy thanks to the presence of a faux-Bill Murray in the lead. It's not his fault, as he does a good job, but that's the reality of this film, a movie that is held together by the plot equivalent of spit and bailing wire, until a memorable, if insane ending. The Blu-ray looks and sounds quite solid, and offers up a nice carry-over extra for fans. Fans of Police Academy should keep their expectations in check, but this is definitely an experience for fans of ‘80s comedies. Francis Rizzo III is a native Long Islander, where he works in academia. In his spare time, he enjoys watching hockey, writing and spending time with his wife, daughter and puppy.Follow him on Twitter