Despite the endless attempts of religious dogma to turn belief in god into a tribal experience, faith continues to be an inherently objective and deeply personal part of human life. One person's interpretation of his god might be vastly different than another's, even if they both share the same sect of the same religion. That's what enables people to do equally wonderful and horrific things in the name of their deity, sometimes even using the same lines of holy text as justification. Regardless of a religion's adherence to symbols, traditions, and rituals, everyone's faith belongs to them, and negotiating the simple requirements of faith with the complex nuances of the human condition is a heavy burden to bear. 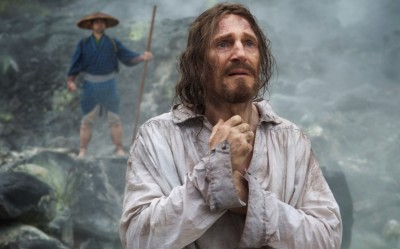 That burden is a subject that Martin Scorsese has been fascinated with since the beginning of his legendary career as perhaps the greatest filmmaker of his generation. One doesn't have to go as far as The Last Temptation of Christ to find a man's personal crisis of faith delicately examined on screen, just look at the way Harvey Keitel's character in Mean Streets struggles to find common ground between his faith and his criminal life. The fact that Scorsese himself voiced the existentially lost inner monologue of the character tells you so much about the director's own fascination with the concept of faith.

That's why it makes perfect sense that Silence, based on Shusako Endo's novel and adapted by Jay Cocks and Scorsese himself, was a passion project for him for over a decade. The story of two Portugese priests going on a perilous journey to save the soul of their apostatized mentor, only to have the strength of their faith reach a breaking point through unthinkable torture and persecution, gives Scorsese carte blanche to create yet another somber and thoughtful meditation on one of his favorite personal subjects.

Thank goodness that this material was left in the hands of such a master, because the premise is ripe for a cynical exploitation of the Christian persecution complex, where the priests are righteous and unyielding carriers of the cross and the Japanese persecutors are godless and evil heathens. Mel Gibson's hacky Hacksaw Ridge presents such a simplistic black and white worldview, not surprising considering his previous work. In both Hacksaw Ridge and Silence, the protagonists, both of them played by Andrew Garfield, are obvious messiah figures.

Yet while Hacksaw Ridge's pacifist hero is always gratified via a childishly simplistic approach to his faith, using it as a borderline supernatural force against the oncoming evil (The Japanese again), Silence's Father Rodrigues is saddled with absorbing the pain and suffering of people who were convinced to follow his faith through his actions and the actions of priests like him. Just like he did with The Last Temptation of Christ, Scorsese once again makes the argument that being a messiah figure amongst such flawed and complex creatures as human beings might not be so hunky dory.

As soon as Rodrigues and his partner Father Garrpe (Adam Driver) reach the shores of Japan, they are protected by a village full of Christians who are keeping their faith a secret from a government that tortures and kills anyone who doesn't turn their backs at that religion. The Japanese Christians consider the two priests to be borderline deities, putting their lives on the line for their protection, which leads to the priests having to witness the brutal deaths of those who trust in their version of god and the afterlife. It's one thing to be prepared to suffer for one's faith, but to see that suffering caused by that faith while being unable to do anything but pray to stop it, that's a burden that takes its toll on the priests, chiefly Rodrigues.

The film's approach to the differences between Christianity and Buddhism, and the subsequent culture clash between the Japanese and the Portugese is refreshingly even handed, especially considering that we're experiencing the story through the priests' point-of-view. The priests are represented as sympathetic and earnest figures, but the fact that they're condescendingly pushing their worldview on another culture while having little to no interest in that culture, a very typical outlook of Western colonialism, is not lost on Scorsese. Some of the most fascinating scenes revolve around Rodrigues and Japanese officials arguing over the validity of Christianity in Japan. The Japanese think of Christianity as yet another take on the question regarding the eternal truth, a take they want no part of. But to Rodrigues, his faith is the one and only truth, as tangible as air and water. Depending on the audience, this makes Rodrigues either strong or arrogant when it comes to his faith, and both sides seem to be right in Scorsese's eyes.

As a big budget studio release, Silence is a bit of a miracle: A patient, introspective study on faith. It's as if an insane producer threw fifty million dollars at Robert Bresson in his prime and told him to go nuts. This is without a doubt one of the most beautiful looking films of the year. Taking a page from Akira Kurosawa's playbook, master cinematographer Rodrigo Prieto turns nature into a metaphysical force to be reckoned with. The heavy fog envelops the characters, creating ample visual symbolism for their waning faith. The meditative performances by the cast are almost superb all around. Even Garfield, who I think is still not enough of a heavy-hitter to carry such a substantial project, captures moments full of subtle intensity. In the middle of so many simplistic "faith-based" films that present an insultingly binary worldview, Silence is nothing short of a, well, godsend.