Middle School: The Worst Years Of My Life 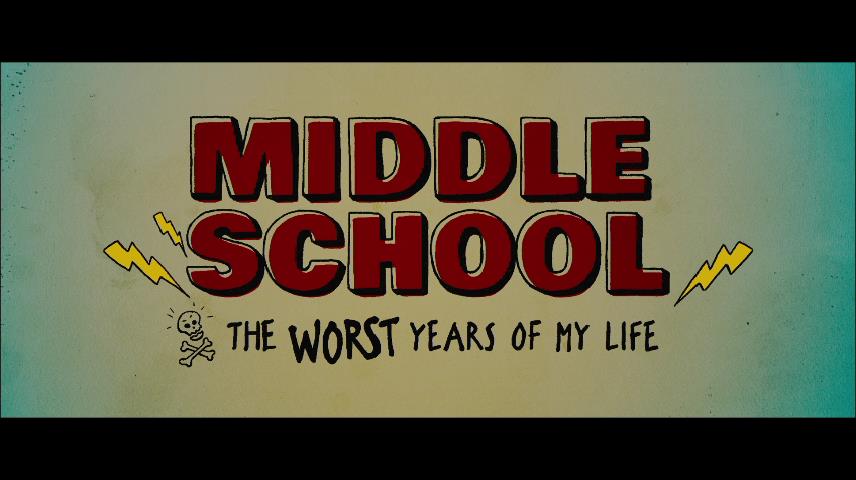 After the success of the "Diary of a Wimpy Kid" books and movies, a number of other jabs at life in middle school have come out- more than 30 years too late for me, but welcome nonetheless. Known in some areas as junior high school, this is when kids are supposed to be growing up but finds many of them at their absolute worst. One reason I'm glad to not have kids of my own is that this is one stage of life that I would be nearly worthless in helping them through if they were on the receiving end of any bullying or humiliation- the best I could tell them would be that things get better if you just stick it out. I'd heard a bit about the "Middle School" series of books but hadn't given them a look; a movie titled Middle School: The Worst Years of My Life seemed full of potential and one that many people could jokingly say was not a documentary about them. I'd seen previews for it played in Target stores rather endlessly for the past few months, showing that it takes a rather family-friendly approach to things and the main character is obsessed with drawing so it likely might not fully live up to its title but I wanted to check it out nevertheless. 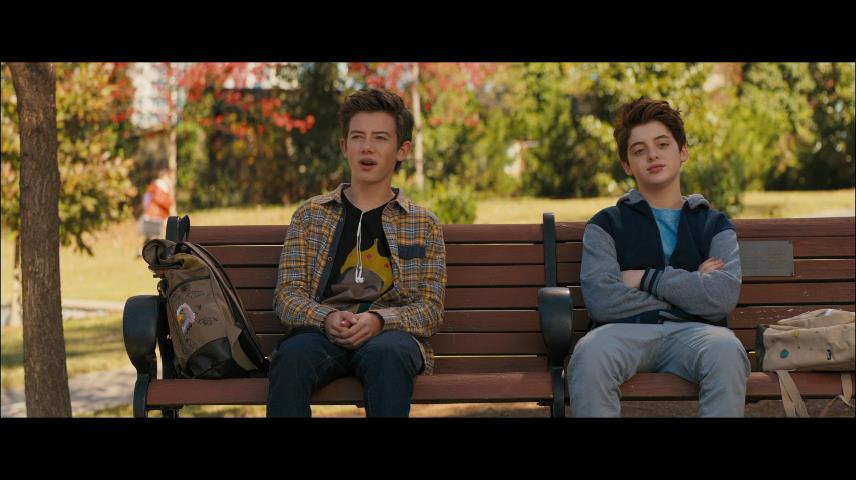 The hero of our story is Rafe Katchadorian (Griffin Gluck)- yes, it's an unusual name, all the better fodder for being made fun of by kids with more normal names. Right away we see that he's obsessed with drawing cartoons, in fact he often stays up all night doing just that. He's also going to his first day as a mid-semester transfer at a new school- he's been kicked out of a few already and this is the last one that will still take him. It isn't explained what he did to achieve that status, and you wouldn't think him even capable of that based on how he looks and acts, but we're supposed to buy that story and go with it. Upon arrival he finds that this new school has a very authoritarian principal- Dwight (Andy Daly, who played a similarly shady mayor in the 2010 Yogi Bear movie), who has a long list of rules that prohibit the students from having any fun or expressing any sort of creativity, as well as an obsession with standardized testing. He's portrayed in a cartoon-villain style though so from the audience's end it's hard to take him seriously or see him as a real threat. One shot shows a nod to Pink Floyd's The Wall movie by having kids marching in line down the hallways being yelled at. Rafe finds that a good friend of his named Leo (Thomas Barbusca) also goes to this school, so that makes things a little easier for him, but gets in trouble with Principal Dwight after he's caught drawing an unflattering cartoon of him. As punishment, Dwight destroys the notebook that Rafe has spent years creating his art in! Leo suggests that he get even by breaking every rule in Dwight's list in a big way, by way of anonymous pranks that the whole school will see. (This proves to be very easy to do; apparently the school is not locked after hours or has any sort of security system.) With Leo's help, the first display of revenge comes as the principal's office and school hallways are found completely covered in post-it notes one morning.

Further pranks include rigging the school bell to make fart sounds (it looks so easy the way it's shown here, yet so difficult for school personnel to fix) and turning the trophy case into an aquarium (done with obvious CG effects that just make me wish for rules limiting their use in movies.) As Principal Dwight gets more infuriated, the students' days seem to be brightened a bit by all of this. But life at home for Rafe gets more challenging as his mother falls into a relationship with Carl (Rob Riggle) who is a complete douche, and only about halfway through the movie do we also learn that he's been coping with the recent death of his younger brother.

Middle School was quite breezy viewing at first, but having to pick it apart for review shows some unevenness- at first Rafe doesn't seem like a bad enough kid to be expelled from multiple schools, but perhaps the movie is showing him through a fantasized lens similar to the fantasy world he lives in himself. With Rafe being an artist, the movie shifts several times into hand-drawn animated fantasy sequences (reminiscent of Better Off Dead) and other times his drawings animate themselves out of his sketchbook and into the live-action scene. I had the impression that the books this movie was based on were written by someone quite young and likely heavily into drawing, but to my surprise the main author is none other than James Patterson, who also wrote the much more adult-oriented "Alex Cross" crime novels which have been the subject of three movies themselves. I then pictured an alternate take on this entire story done more in the style of a straight drama, with less humor and more emotional focus on the problems Rafe was facing. But this is probably yet another time when I'm thinking about things a bit too deeply. 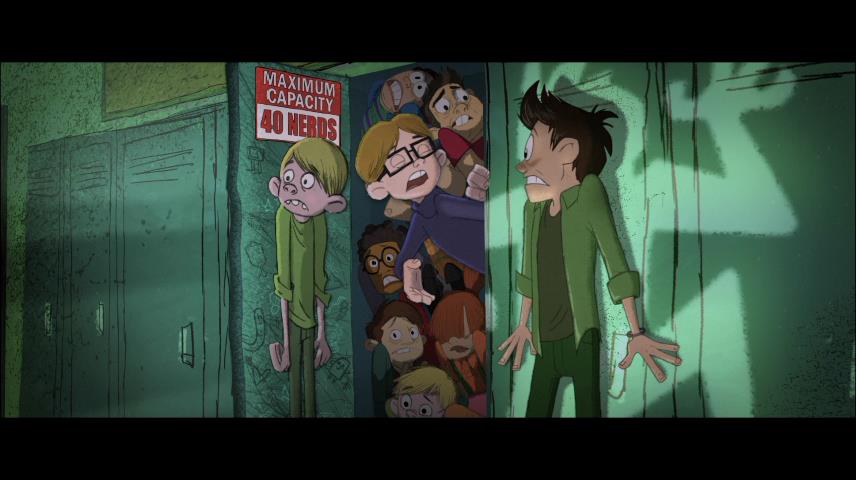 Shot digitally in a 2.35 ratio, the movie looks very sharp and detailed with bright colors that convey the feeling of being in an almost-fantasy world. Interestingly I did notice a few focus-related oddities in some outdoor shots that appear to mimic those of anamorphic lenses used for films. Lionsgate's Blu-Ray encoding is slightly below par showing gradient banding in a few background details and a few slight compression artifacts as well. A standard DVD is also included which naturally looks a bit softer. 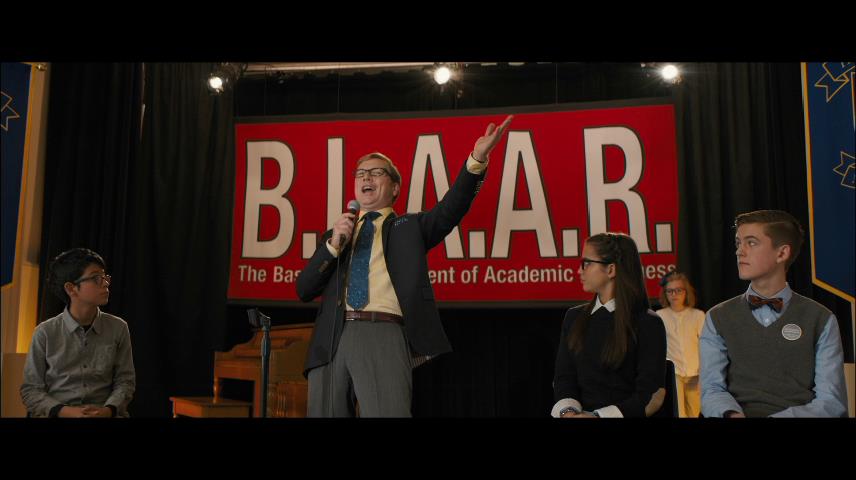 The 5.1 audio mix (in DTS Master Audio on the Blu-Ray and Dolby Digital on the DVD) is rather lively, with most of the sound kept up front but the surrounds kicking in mainly to support the animated sequences. A few instances of the school bell ringing (in both its original and hacked forms) also let the rear channels make their presence known just when you might have forgotten they were there- I jumped in my seat in response more than once.

There's a 5.1 Spanish dub along with an audio description track, and the Blu-Ray also includes a 2-channel mix "optimized for late-night listening" where the bass in the music seems to be toned down a bit- the overall dynamic range of the original mix isn't very high to begin with. Spanish subtitles are included along with both standard English and hearing-impaired (which also show the artist and title of most of the songs featured in the movie as they play.) 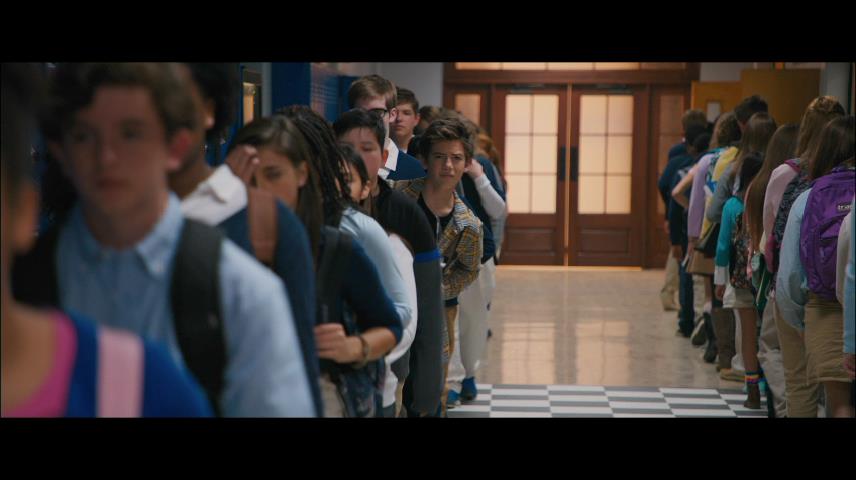 There are three brief behind-the-scenes segments which mostly show the cast joking around on set, although one devoted to Rafe and Leo's pranks is pretty funny- while they may have been able to cover the school in post-it notes in one night, in reality it took about six days for several people to do that to the set. There's also a segment that just seems to be there for the sake of having more to click on called "The Wedgie Wheel" where cast members talk about their personal experiences with wedgies- fortunately few actually had any- and some brief deleted scenes and a gag reel. Previews for The Great Gilly Hopkins and Rock Dog are included on both discs. 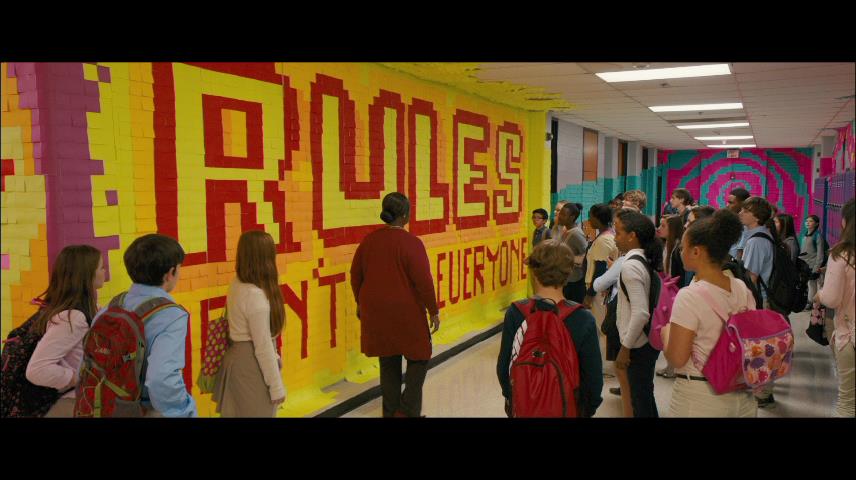 Middle School is one of those movies that seems innocent enough at first glance, but gives you a bit more to reflect on by the end. While it's a bit uneven, the production design and animated segments are very nice to look at and the young cast includes a few faces to watch in upcoming years. Hopefully at least one more movie based on this series of books can make it out before anyone gets too old.