Kino // Unrated // September 13, 2016
List Price: $12.69 [Buy now and save at Amazon]
Review by Stuart Galbraith IV | posted January 11, 2017 | E-mail the Author
Though almost instantly forgotten when audiences took notice at all, the TV-movie Gunsmoke: One Man's Justice (1994) marked the end of an American institution. It was the final Gunsmoke story, the last to star James Arness as Matt Dillon, and Arness's final role of any sort. He retired after this telefeature, which he also co-executive produced, passing away in 2011 at the age of 88.

Happily, the film is a fitting end for the long-running series, which began in 1952 as a popular and acclaimed adult Western radio drama, the best of its kind. Arness led the equally fine television adaptation, which began in 1955 and ran 20 seasons, racking up a staggering 635 episodes, including four consecutive years as the #1 show in the country, and 13 years in the Top Ten. Though a couple of TV shows have matched or exceeded Gunsmoke's run in terms of number of seasons, episode-wise no prime-time live-action series has ever topped it. And it's unlikely anyone will ever beat Arness's run as Matt Dillon. After the series ended, Arness returned for five TV movies produced between 1987-94. Though Arness appeared memorably in a handful of movies before Gunsmoke and several TV shows after, including How the West Was Won (1977-79), a cult series in Europe even more popular there than Gunsmoke, for Arness Matt Dillon truly was the role of a lifetime. 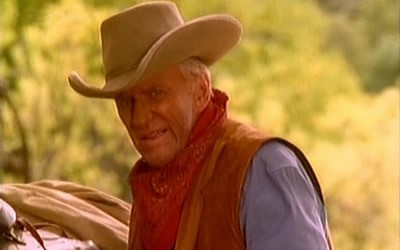 The teleplay, by Harry and Renee Longstreet (TV's Fame), coupled with Arness's performance, captures the essence of Matt Dillon quite well, and is solidly structured. A ruthless gang led by Irish outlaw Sean Devlin (Alan Scarfe) attempts a stagecoach robbery, ultimately thwarted when a trio of passing cowhands intercedes after hearing the gunfire.

However, passenger Davis Healy (Bruce Boxleitner) along with the husband of Beth Reardon (Amy Stoch) are wounded, while Hannah Miller (Hallie Foote), the widowed mother of two young boys, dies of her gunshot wounds that night.

The passengers take refuge at the home of Beth's father, retired marshal Matt Dillon (Arness). The older of the two orphans, 15-year-old Lucas (Kelly Morgan, incredibly actually 37 at the time according to the IMDb, though he looks like a teenager), decides to hunt down and kill the men who murdered his mother, slipping away into the night. Matt and Davis leave the next morning to bring him back.

Like his kid brother, actor Peter Graves (born Peter Aurness), James Arness became a veritable Prune Face in his old age, less so than Graves, but still something resembling a worn-out saddle bag. He was also 70 years old at the time of filming and yet there's no question Arness still had plenty of miles in him. His mentor, John Wayne (who had Arness under contract in the early 1950s) looked far worse at his age, what with his big gut and unconvincing toupee. Arness, by contrast, looks remarkably fit and his voice is as strong as ever. As Matt, Arness projects the same quiet authority he did on the TV series and there's no question at all that he's playing the same character, embodying all those years of experience as the longtime marshal of Dodge City. Compared to other actors returning to roles after long absence, most obviously Raymond Burr as Perry Mason and James Garner as Jim Rockford, Arness is in far better physical shape.

The plot of One Man's Justice is hardly innovative but satisfying. London-born actor Alan Scarfe makes an unusually formidable heavy. Boxleitner's mysterious character, whose true motives aren't exactly a huge surprise when finally revealed, nonetheless are methodically peeled away and carry a modestly successful dramatic punch at the end. (Arness must have been fond of him. Boxleitner guest-starred on a Gunsmoke before co-starring with Arness on How the West Was Won.)

Sadly, by 1994 Arness was virtually Gunsmoke's sole survivor, with longtime supporting players Amanda Blake, Milburn Stone, and Ken Curtis all dead. It's unfortunate that a few more show veterans, particularly Dennis Weaver's Chester (who left the show in 1964) couldn't have been brought back but, then again, Gunsmoke was always Matt Dillon's story and, by this point, he had long ago got outta Dodge.

One Man's Justice is obviously padded with a subplot involving Beth's efforts to help Martin (Mikey LeBeau), the younger of the orphaned boys, following his mother's murder and brother's disappearance. Beth, revealed as the "love child" of Matt and Michael Learned's character from a 1973 Gunsmoke ("Matt's Love Story"), had already appeared in three earlier Gunsmoke TV-movies, so her story, it might be argued, is in keeping with the series' ensemble-like plotting, especially after it went to an hour format in 1961.

Presented full-frame, Gunsmoke: One Man's Justice was shot on 35mm film but, as was often the case at the time, edited on videotape, compromising somewhat the handsome Tucson locations. Audio is clean and clear in this Region 1 encoded DVD. No Extra Features.

James Arness's swan song as Matt Dillon, not to mention the final, absolute end of Gunsmoke itself, is a modest but very worthwhile effort. Recommended.