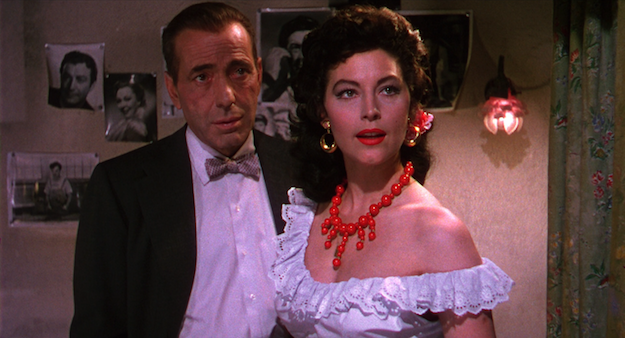 If ever there was a film to challenge the movie-making truism, "Show, don't tell," it would be Joseph L. Mankiewicz's The Barefoot Contessa (1954). As in Mankiewicz's best-known film, All About Eve, sharp and loquacious dialogue dominates Barefoot Contessa's storytelling, sometimes to a ridiculous degree.

The first of the film's many monologues is heard in voice-over (another dubious "must-avoid" for today's screenwriting students), as we see the hangdog face and soaked raincoat of film director Harry Dawes (Humphrey Bogart). Harry is standing in the rain at the funeral of his great cinematic discovery, Maria D'Amata, née Vargas, buried finally as the Contessa Torlato-Favrini. Maria is played by Ava Gardner, who manages to embody the character's idealized mixture of earthiness, understated thoughtfulness, and unrepentant sexuality without sacrificing her plausibility as a human.

That isn't to say, however, that the image of Maria Vargas that the film projects is a fully formed one. Using a structure that recalls his brother Herman's script for Citizen Kane, writer-director Mankiewicz retells Maria's ultimately tragic rise to fame and wealth through sometimes disjointed flashbacks, not only from Bogart's Harry Dawes, but also from cartoonishly sweaty PR man Oscar Muldoon (Edmond O'Brien, in his Oscar-winning role), who witnesses Maria's sham courtship with spoiled playboy Alberto Bravano (Marius Goring), and finally from the chivalrous man who would eventually claim Maria's heart, Count Vincenzo Torlato-Favrini (Rossano Brazzi, Three Coins in the Fountain). Harry's relationship with Maria is the deepest one shared with any of the three narrators, but even Harry can't be trusted to tell this mythical woman's story in the way that she might.

This distance, which allows the audience access to Maria only through the gaze of those around her, is clearly by design. In fact, during Maria's first scene in the movie -- dancing in a Spanish nightclub -- she is never once visible onscreen. Mankiewicz instead focuses on the varied reactions of the spectators, who are amazed, intoxicated, and, in many cases, made jealous by Maria's unseen performance.

While this choice of keeping Maria away from the audience works brilliantly in an anticipation-building early moment, it becomes distracting and unsatisfying in later sequences in the film. When Maria, the big Hollywood star who never forgot who she really is, learns that her poor, put-upon father is being tried for the murder of her abusive mother, she ignores conventional showbiz wisdom and supports her father at the trial. Maria gives one of the finest performances of her life in the courtroom, testifying for her father -- but we the movie audience don't get to experience it. Instead, the courtroom scene plays out in pantomime, narrated point-by-point by the gobsmacked PR man, Muldoon, as he watches in the courtroom. Later, when Maria's would-be fairy tale romance to Count Vincenzo turns sour, Mankiewicz chooses to dramatize the unraveling of their marriage by having Maria describe it to Harry in a late-night conversation, rather than giving us a chance to see the strain in their interactions ourselves.

Clearly, Mankiewicz just prefers staging scenes between Bogart and Gardner, volleying his carefully crafted dialogue at each other. The fact that Bogart's character is basically a Mankiewicz surrogate probably has something to do with it (while the life story of Gardner's character bears a tell-tale resemblance to Rita Hayworth's, mixed in with tidbits from the bios of some other classic female stars -- including a bit of Gardner's own). However, one should not discount the amiable chemistry that Bogart and Gardner consistently generate onscreen as a motivating factor either. Reportedly, the two stars couldn't stand each other, but no traces of that animosity are palpable in their generally sweet shared scenes. Smartly, the then-54-year-old Bogart is not positioned as a possible romantic option for Gardner, which allows their characters to develop a believable mentorship and friendship.

Besides eschewing action in favor of conversation, Mankiewicz frequently flouts Hollywood convention by having characters cynically dissect how their behavior deviates from what it would be in one of Harry Dawes's scripts, i.e., a "normal" movie. These self-conscious quirks help to give The Barefoot Contessa a strong personality, but they also represent what makes this a memorable film without being a wholly satisfying one. There's clearly a smart, sensitive heart beating at the center of The Barefoot Contessa, but its creator is too busy making ingeniously snarky cocktail party banter to let the audience get anywhere near it. 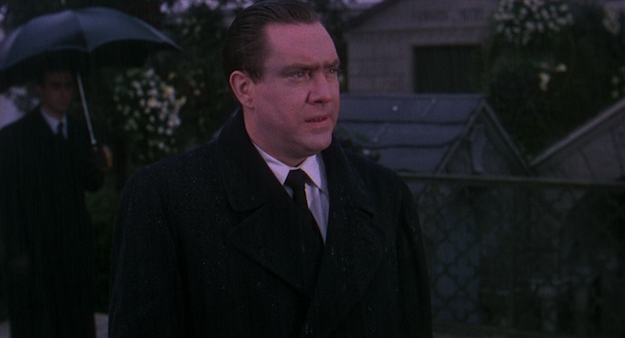 The Blu-ray
The Barefront Contessa comes in a limited edition of 3000 copies. The disc is packaged with a booklet featuring some B&W stills and a liner note essay by Twilight Time's Julie Kirgo.

The Video:
While there are no major digitally inflicted flaws on this disc's AVC-encoded 1080p 1.85:1 presentation, it's only about 3/4 of a great transfer. Shot by Technicolor genius Jack Cardiff, the images are typically bold and beautiful, and at its best, this transfer is vivid and crisp. Unfortunately, there are many scattered sections that have different anomalies: fluctuating image density, incorrect color balance, or a grainy "step down" look -- even apart from shots that segue into and out from an optical dissolve and would naturally have a dupe-y, "step down" quality. Admittedly, these issues are subtle enough that they will probably only disturb videophiles. Even the least optimal shots are stable and clean enough that it'd be easy for less sensitive viewers not to take notice or be bothered with the inconsistencies.

The Audio:
The disc offers three DTS-HD MA mixes of the soundtrack. The first is a newer 5.1 surround remix that provides some palpable spatial ambience, but isn't drastically different from the 2.0 stereo remix. Both remixes are clean and understandable, but the dialogue sounds fairly limited and even a bit boxy at times. The musical score by Mario Nascimbene gets the biggest upgrade in the remixes, but still isn't quite as enveloping as other remixes of vintage soundtracks, such as the work presented on Twilight Time's disc for Anastasia. Most novel is the inclusion of the film's original 3.0 Perspecta mix, which was meant to make the sounds "follow" the actors onscreen. If the actor walks to left side of the screen, the essentially mono soundtrack pans to the left speakers with him. It's distracting and gimmicky, but it's nonetheless pretty cool to have the option to reproduce this unusual theatrical experience. The disc offers one subtitle option: English SDH.

- Another entertaining in-house commentary from the TT crew, heavy on Old Hollywood gossip.

Final Thoughts:
Writer-director Joseph L. Mankiewicz squeezes enough memorably witty lines into The Barefoot Contessa to rival his own All About Eve, but this poison pen letter to the Hollywood dream factory is a little too caustic to give its gentler aspects the proper emotional weight. Bogart fits Mankiewicz's curmudgeonly worldview like a glove, while Ava Gardner has her cake and eats it too, by exemplifying the quintessential mythic Hollywood sex symbol within a role that debunks those very same myths. As a film, the whole may not be greater than the sum of its parts... but what parts! Recommended. 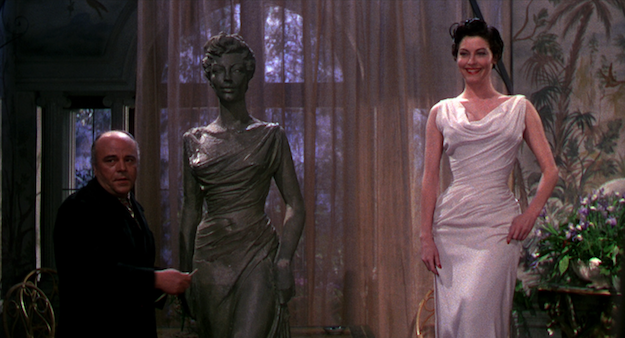