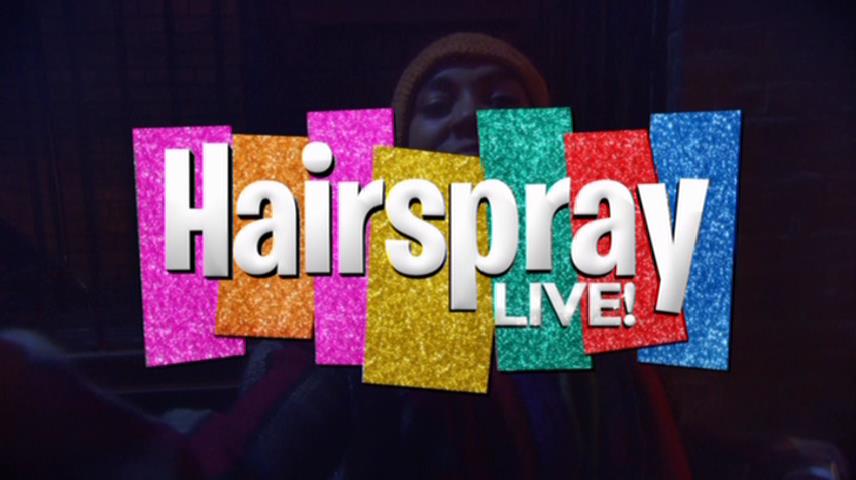 Live musicals, broadcast as they were actually being performed with no post-production or editing involved, were once a staple of network TV during the 1950s and 60s. Recently there have been efforts to bring them back, with some networks committing to doing one per year and each has been quickly released on DVD afterwards. The latest of these is "Hairspray," which began in 1988 as a comedy from cult director John Waters (his first to be rated PG and a mainstream success), adapted as a Broadway musical in 2002 which was then made into a movie in 2007.

The story remains the same in all versions, though obviously the musical version works in several original songs (by Marc Shaiman and Scott Wittman) done in the style of popular music of the period of 1962 where the story takes place. Heavy-set teenager Tracy Turnblad (played here by newcomer Maddie Baillio) is a big fan of The Corny Collins Show, airing live in Baltimore featuring kids dancing to popular songs a la "American Bandstand". She especially has a crush on the show's main dancer Link Larkin (Garrett Clayton) and dreams of being part of the cast. Of course that seems to be a bit out of her league, especially with the female lead being the rich elite Amber Von Tussle (Dove Cameron) and her mom Velma (Kristin Chenoweth) being one of the show's producers. Still, Tracy gets the opportunity of a lifetime after one of the dancers has to take a nine-month break from the show (you can guess the reason) and auditions are being held for a replacement. Though the snobs laugh at her (Amber gives one of my favorite lines that's present in all versions, saying that she can't be on the show because it "isn't filmed in Cinemascope"), she's liked by the host (Derek Hough) and makes it on much to Amber and her mother's chagrin. Link ends up taking a liking to her as well. Tracy soon starts to shake things up in terms of the show's racial segregation- only clean white kids are allowed on the show (as explained in the song "Nicest Kids in Town") but once a month has "Negro Day" when a group of black kids appear instead. When Tracy ends up in detention with Seaweed (Ephraim Sykes), one of the stars of that edition, she quickly embraces their music and culture realizing that segregation is morally wrong and begins a controversial fight to have the show become racially integrated. 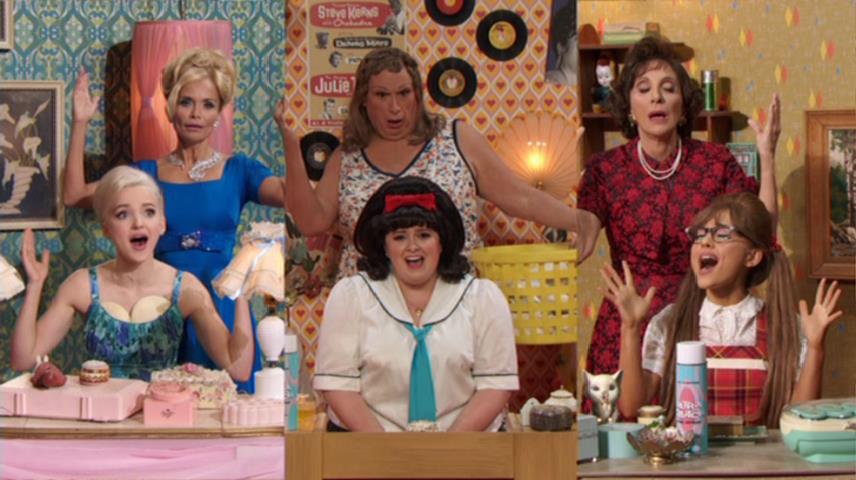 The segregation issue was the center of Waters' original movie (which had no song-and-dance numbers but was filled with plenty of period pop songs) yet the atmosphere was kept campy and ridiculous, primarily with Tracy's mom Edna being played by the famous cross-dresser Divine. The movie musical had John Travolta in that role which was mildly amusing, but here the spot is taken by Harvey Fierstein who also wrote the "teleplay" for this version. While the other two at least attempted to sound a bit feminine, Fierstein plays it with his usual trademark gravelly voice even while singing, making the role his own and in a different league than the previous versions. A campiness is also given to the performances of the "bad" characters like Velma and Amber, showing them as sort of "generically evil" so that you can't hate them too much. Most of the rest of the cast is irrepressibly sunny and upbeat, much like in the movie musical version, and like that version this one should leave you in the same mood.

While I've heard a bit of post-production tweaking and editing was done for this DVD, it did play out live which again is a rare thing these days. (Of course it was shown delayed 3 hours on the West coast, I've heard some of the other "Live!" productions did second performances for that time zone; that's been one of my oldest complaints about network TV as being on the West coast it feels like we're getting sloppy seconds.) With that kept in mind the timing is pretty amazing- although I can't confirm as to whether any of the singing was pre-recorded or not. A larger than usual area was used for the performance to accommodate the various scenes without having to quickly set up and change the sets.

The show does suffer a bit from the choice to have the cameras set at 24 frames per second, producing a more film-like frame rate even when shown live. This doesn't end up looking as much like film as digitally shot movies or shows shot with similar equipment; instead it just looks like video at a lower frame rate and I've never been a fan of that. Of course the picture further suffers with this standard-definition DVD; oddly all of these productions have quickly been issued on DVD but none have been available on Blu-Ray. I can still tolerate the low resolution of standard DVD more than the constant logo NBC has kept plastered onscreen since 1996 (starting out in the lower-right corner and moving to the lower-left ten years later- I expected ten years after that it would shift to the upper-right but that hasn't happened.) I actually tuned into the beginning of "Hairspray" to see if they would make an exception and air it with a clean picture, but tuned out immediately when the peacock appeared. On this disc the current NBC logo only shows up on the cover, as it should. While no commercials are included, there is about a second of black shown where they would have appeared. While in the 1960s live plays were often divided into "acts" lasting close to 30 minutes and only had commercials between those, here it seems they crammed in as many as they possibly could. The DVD is chaptered where each break would have been; most segments run an average of 7 minutes and the fading-out at the end of each seems very abrupt compared to earlier shows that allowed more breathing room between commercials. 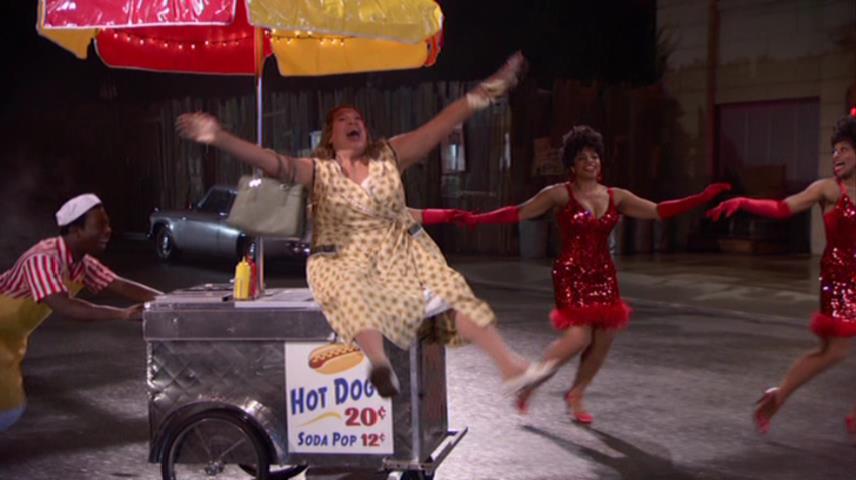 As mentioned this was shot with HD cameras but only available as a standard-definiton DVD. The quality doesn't even live up to the best the format is capable of, as there are a number of compression artifacts despite the disc being dual-layered. The compression appears to be about the same as found on the average digital TV broadcast; again it's a shame that this wasn't released on Blu-Ray. 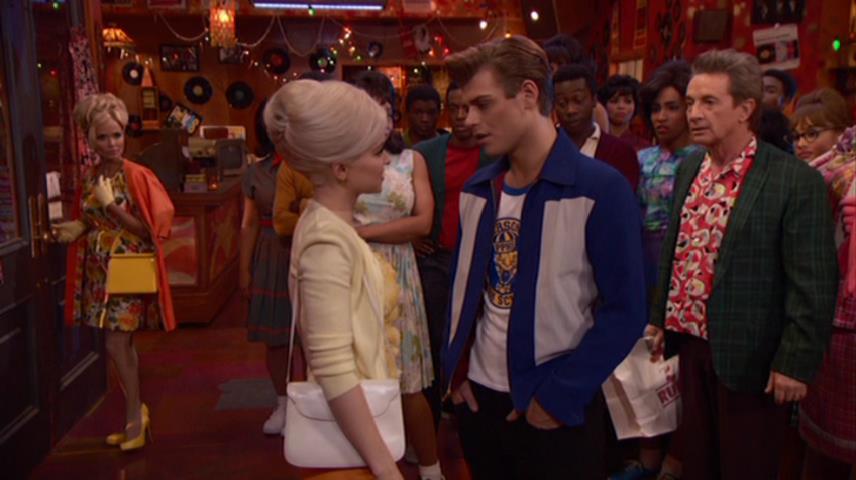 The 5.1 Dolby Digital track here is adequate for the most part- the volume level is lower than usual but once you have your system turned up to compensate it's mostly fine. Still the level of dialogue and live singing often seems lower than that of the music drowning out some words (and the disc has no subtitles or captions!) and the dialogue is also spread to the left and right channels with the center remaining mostly silent, although it does stay centered well enough if you're sitting in the sweet spot. The surrounds are underused for the most part, popping up mainly during applause after numbers taking place at the Corny Collins TV stage. (Again I have heard that a bit of tweaking was done to the live sound for this DVD.) 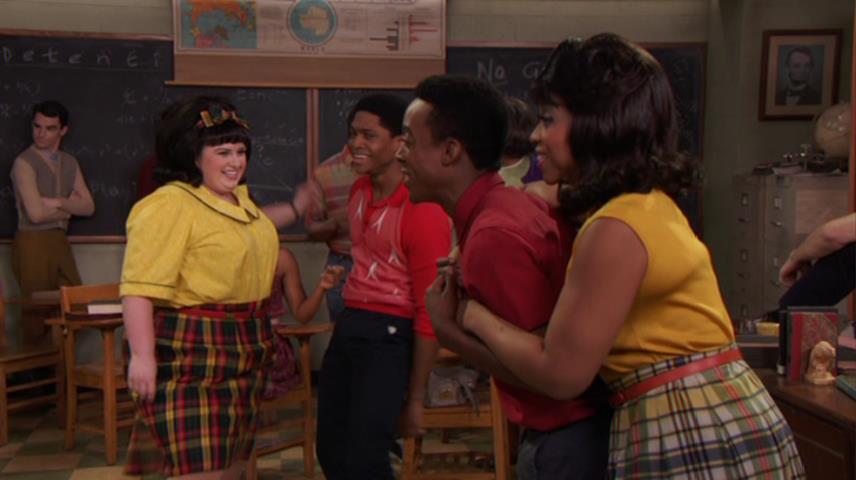 This production of "Hairspray" is entertaining enough and impressive that the cast was able to perform it all live in real time. I would still suggest those new to the musical see the 2007 movie first before watching this production, as it has the "bigness" of a traditional musical that no TV production would be able to match. It is a bit puzzling more than ten years after the introduction of Blu-Ray that this has only been issued on standard DVD; as more of these live productions are in the works it would be nice to see them on a higher-quality format, or at least treated with more respect for presentation during their network broadcasts in which case I would actually watch them live to begin with.