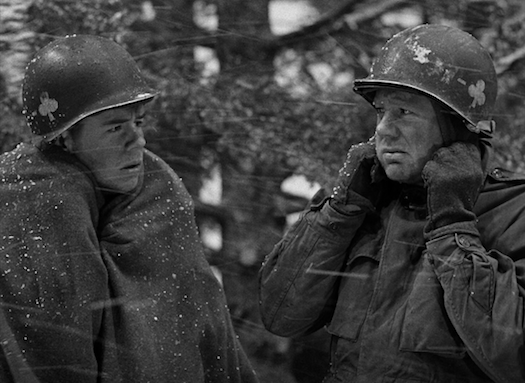 The 1949 WWII film Battleground is an Oscar-winning combat drama, set during the Battle of the Bulge. Prefiguring the clear-eyed approach of the great Korean War flicks Fixed Bayonets! and Pork Chop Hill, director William A. Wellman eschews bombast and hokum, and keeps his film focused on the soldiers on the ground.

Marshall Thompson (Daktari) isn't the top-billed member of the ensemble, but his character, Jim Layton, is essentially the film's protagonist. Layton is an infantry man who has just upgraded to become a new member of the 101st Airborne Division. Ironically, his company's first assignment has them pretending to be regular ground troops to draw less attention. (The subterfuge doesn't work, as the Germans drop fliers "welcoming" the 101st to Belgium.) This battle will be a rite of passage for the relatively green Layton, but the script by Combat!'s Robert Pirosh* doesn't make an unnecessary fuss about it.

The other men in the company are all rather quirky and colorful, as you would expect from this kind of flick. Hansan (Dennis the Menace's Herbert "Guy" Anderson) keeps his watch set to the local time in his hometown. Kipp (Douglas Fowley) constantly clicks his false teeth, which were given to him by the army after he knocked out his real teeth, in hopes of getting away from the front. Jerome Courtland's proud hick Abner frequently gets on the nerves of John Hodiak's intellectual newspaperman Jarvess. Roderigues (Ricardo Montalban) is the only guy who is excited when his platoon's foxholes are blanketed with snow -- because he has never seen snow before.

Van Johnson has top billing, but his performance is no heroic Hollywood star turn. His character, Holley, flirts intensely with a French woman (Denise Darcel) who gives the soldiers room and board for a night. The next morning, he steals eggs from her chicken coop. (He spends most of the movie's first half trying to find an opportunity to cook said eggs in his helmet, in just one of the film's many effective humorous touches.) When his tobacco-spitting superior (James Whitmore) is injured and puts Holley in charge, he looks like he wants to go AWOL that very second. Johnson is a likable fit for the role, and like all of his colleagues, he never pushes Holley's quirks to an cartoonish level. 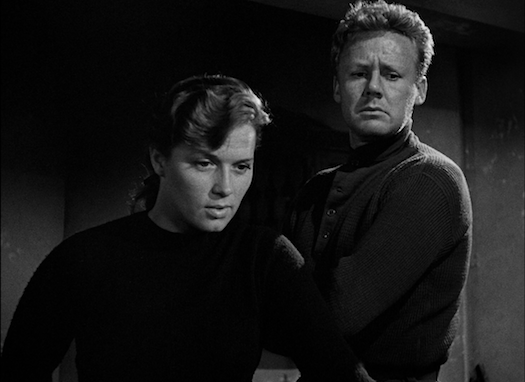 Battleground is a film that is energetic and always seems to be moving, but it keeps its scope so tight that we never know exactly where we are headed. After all, these characters are ordinary men who just know what their superiors tell them. They have no notion of the momentous fight they are walking into. Heck, they barely know which country they are in at a given moment. At one point, Jarvess, the former journalist, pointedly comments that the folks at home have a better idea of what's going on in the war than the men fighting it.

As in the aforementioned Fixed Bayonets and Pork Chop Hill, there's a sense that there is no fairness in what these soldiers are asked to do. They thought they were going on leave to Paris, but instead they get stuck with this mission. They dig foxholes for hours, before learning that the company is moving a few miles down the road, and now they have to do it all over again. They run out of food and ammo. They are blocked off by snow and fog. George Murphy plays a character who is given a discharge, but can't fly out until after the Germans have been cleared out of the way. Eventually the fighting gets so intense that wounded men are rounded up from a nearby hospital and sent back out to fight.

Battleground mostly avoids being a message movie, but it features one thematically direct (and quite memorable) scene, where Leon Ames plays a chaplain who offers the soldiers a Christmas sermon. He basically tries to mitigate that pervasive feeling of unfairness, and puts forward the idea that the fight against Nazis, and against fascism, is a wholly necessary one.

"We must never again let any force dedicated to a super-race, or a super-idea, or a super-anything become strong enough to impose itself upon a free world. We must be smart enough and tough enough in the beginning to put out the fire before it starts spreading. My answer to the sixty-four dollar question is: Yes. This trip was necessary. As the years go by, a lot of people are gonna forget, but you won't. And don't ever let anybody tell you you were a sucker for fighting the war against fascism."

Setting aside the resonances some readers are bound to find reflected in the current geopolitical climate, the scene still works today because Ames keeps this speech centered in the point of view of his character. It doesn't hurt that Wellman undercuts the potential self-seriousness of such a scene with realistic humor, such as James Whitmore looking for a place to dispose of his remaining chewing tobacco and Marshall Thompson quietly flip-flopping over whether or not he should pray.

It's the accumulation of those small, relatable human elements that distinguishes Battleground and makes it a film well worth experiencing for viewers of all stripes.

*Pirosh's script won one of this film's two Academy Awards. The other went to Paul Vogel's cinematography. 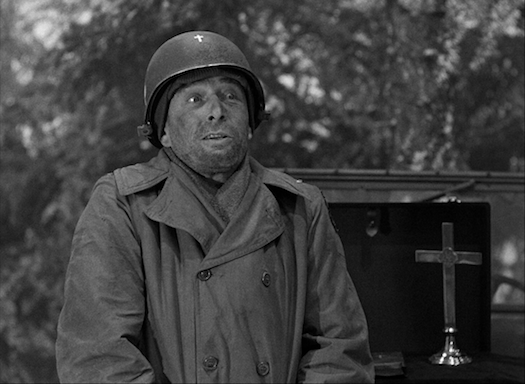 The Video:
Another beaut from the Warner Archive Collection. The AVC-encoded 1080p 1.37:1 image boasts excellent depth and clarity. A few scattered shots look a little weak density-wise, but there is no major film damage. There are no significant digital compression issues either.

The Audio:
The DTS-HD MA 2.0 mono audio is nicely restored and defect-free. It's a little flatter and less intense than one might expect for the sound mix on a war flick, although the lack of an overpowering sound design subconsciously gives the battle scenes the same verisimilitude as the scenes of trudging through the snow. Not much music, but what is there sounds good. The disc includes an English SDH track, but unfortunately it's all in ugly yellow caps and does not always match the timing of the actors' dialogue.

Special Features:
The trailer is a new addition, but the other short subjects are carried over from the 2004 DVD.

Final Thoughts:
Battleground bucks convention and cliché, while offering a portrait of American soldiers during the Battle of the Bulge that is empathetic and believably lived-in. It's terrific. Highly Recommended. 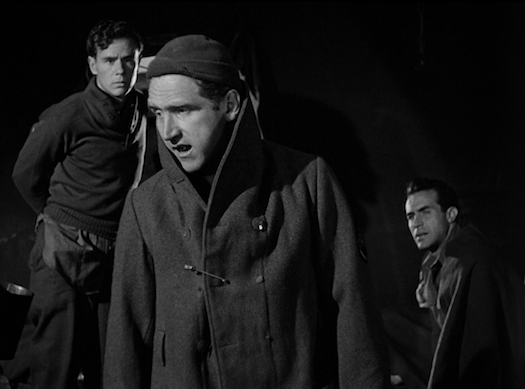