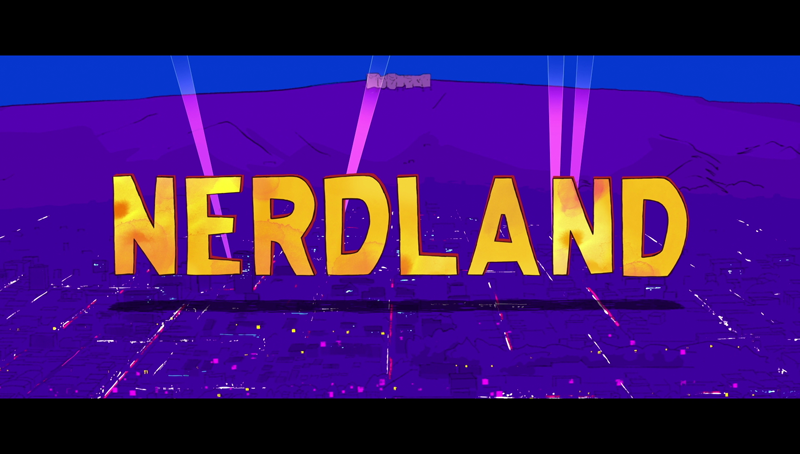 
The Movie
La La Land is an award-season darling, mainly because it celebrates the industry that distributes those awards and sympathizes with those who struggle inside its world. If you're a voter, you either see yourself in the characters or love the world of movies and art that it depicts. Take away any hint of possible success, and the animated Nerdland is not unlike La La Land, showing a Hollywood inhabited by constant strivers who have no idea how to actual achieve their happiness, at least not without losing everything. John (Paul Rudd) and Elliot (Patton Oswalt) are Sebastian and Mia's worst case scenario, and far more relatable to anyone ever to double click that Final Draft icon.

Written by Andrew Kevin Walker (Seven) and directed by Chris Prynoski of animation house Titmouse, Nerdland depicts the misadventures of a pair of Hollywood nobodies: a failing actor (John) and a struggling screenwriter (Elliot). With no prospects of success in their chosen fields, they set out to find fame any way they know how, which is mainly through the twisted lens of the popular media, but mainly viral video stardom. It's in their pursuit of this validation (along with much of the humor) that the film feels most like a handful of TV episodes smushed together (which is why it was no surprise when I found it was actually pitched as a TV show at one point.) Episodically, the pair try one tack after another, without much character development nor plot progression (outside of some aggressively obvious foreshadowing.) 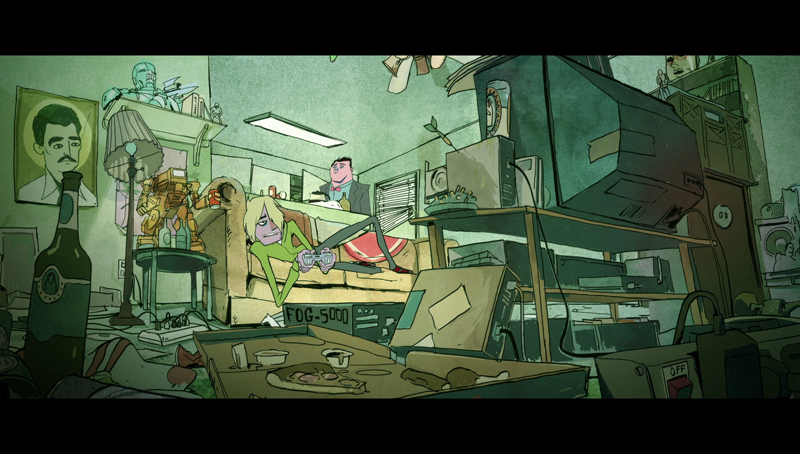 It's unfortunate that the film's characters and plot don't work, because so much else does. If one ever needs proof that an actor can make a weak character seem interesting, exhibit A is Oswalt, who breathes underserved life into Elliot, and made me want to watch his story through its conclusion (which, is unfortunately another thing that it can't really land.) Matched up with a very low-key Rudd, Oswalt is turned loose and brings the persona that makes his stand-up so very good. The cast is loaded with big names (as you'll learn by watching The Longest Credit Sequence in the History of Film, which includes more than 30 actors) but most of them blend in quite well, whether its stars like Paul Scheer, Molly Shannon, Laraine Newman and Sally Kirkland or animation vets like Mike Judge, Jess Hartnell and Brendon Small. Kate Micucci and Riki Lindhome (of Garfunkel and Oates fame) get somewhat thankless parts (and overly bouncy animation) as two equally fame-hungry female friends of the leads, but Hannibal Buress is a good deal of fun as the creepy proprietor of a local store.

Even if the story and characters often fail to excite (feeling the temptation to reach for my phone is never a good sign), the animation is a brilliant bit of rough-hewn and admittedly ugly artistry. If you threw Mission Hill, Beavis and Butthead, Duckman and Aeon Flux in a blender, you'd get something like the detailed, alt-comic style of Nerdland, with pencil sketch design and unusual color patterns, which help achieve a look you could only have in animation. There are some truly insane sequences to be found, including both a buffet of violence and an orgy of pornography, and the use of extreme angles and quick cuts keeps the momentum going even when the story is somewhat static (or worse, repetitive.) Watching the film and seeing it travel down similar paths repeatedly, one wonders if the concept would have worked better as a series. 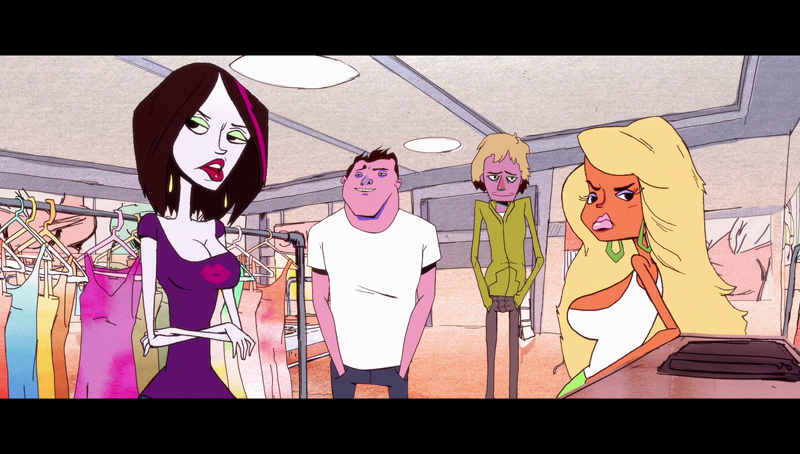 The Disc
After a one-night release in theaters, Nerdland has made it to Blu-ray, packed in a standard Blu-ray keepcase. The disc has a static menu with options to watch the film, select scenes and adjust the languages. There are no audio options, but subtitles are available in English, English SDH, Spanish and French.

The Quality
When you compare the 1080p, AVC-encoded 2.35:1 transfer really lets the fil's unique animation shine, with a high level of detail that lets you notice all the little things hidden in plain sight (freeze frame the insane montages to experience some very odd imagery.) Though some of the hard edges reveal some artifacting, overall the image is clean and quite impressive, with diverse, appropriate color and artistic touches that lend the film a hand-drawn feel. With a lesser image, the quality of Titmouse's animation would have been lost, but it comes across vividly.

There's a decent amount of action in Nerdland, but the DTS-HD Master Audio 5.1 track isn't the most boisterous affair, throwing its punches economically. In a few select scenes where the surrounds kick in or the low-end steps up. Otherwise, it's somewhat dominated by front and center dialogue,; with some atmospherics for flavor. Only the music is a consistently presence, using the sides and rear to built up some weight. There's nothing to complain about, as the sound matches the tone of the film and does its job.

The Extras
It would have been a delight to hear from any of the people involved in this film. But we do not, for there are no extras to be found. For shame. 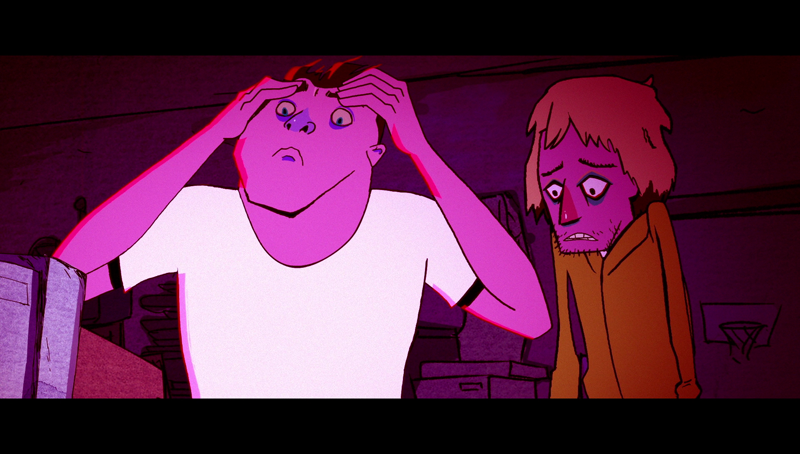 The Bottom Line
I love interesting animation, adore Patton Oswalt, will watch Paul Rudd in just about anything and always welcome the chance to hear from Kate Micucci and Riki Lindhome, but put them all together in a movie about Hollywood and it just doesn't quite work. Perhaps it's too inside baseball or perhaps the characters are just too unlikable, but Nerdland doesn't come together as a comedy, despite a handful of worthwhile moments and consistently impressive animation. The disc looks and sounds very good, but offers no extras, so you have to really be into the film to want to own it, which may just be the case i you have ever worked on your screenplay at a Starbucks on La Brea. Francis Rizzo III is a native Long Islander, where he works in academia. In his spare time, he enjoys watching hockey, writing and spending time with his wife, daughter and puppy.Follow him on Twitter