With John Wick: Chapter 2, the series officially becomes the Harry Potter of ultraviolent hit man action franchises. You know all those countless Young Adult book and movie series where a secret underground society of wizards, vampires, werewolves, (insert public domain magical being or monster), operates beneath our real world, complete with its own set of cultures, rules, and infrastructure? Replace the wizards with stoic, impeccably dressed, and superhumanly precise and focused hired killers, the wands with guns, the spells with copious amounts of blood and brain matter spraying across the floor after making an unscheduled exit from many, many skulls, and you get the gist of what makes this series so appealing to hardcore action fans. 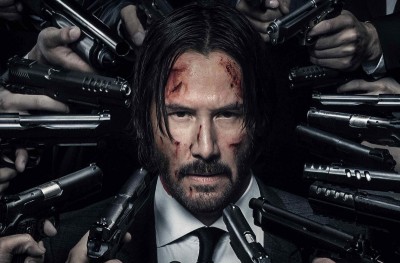 The first John Wick strung together an almost laughably paper thin plot that had our "boogeyman" killer go after a mob boss' son to avenge the death of his beloved puppy (Yes, this actually happened. Check the official synopsis of the first film). Wick's (Keanu Reeves) second mission into using his gun like a samurai sword that's obsessed with disintegrating perfectly functioning human brains, while using his bare hands to break bones as if they're made of chalk, doesn't really offer the most original or unpredictable screenplays, not that anyone should really care about that.

After retiring himself in the most gloriously violent fashion in the first film, Wick is dragged back into the old job by an Italian mobster (Riccardo Scamarcio) who's so hell-bent on becoming the new boss that he uses a blood oath called a "marker" to force the bearded gun wizard to assassinate his sister, who's at top of the food chain within a top-secret cabal of crime bosses. If you actually believe that there's no way in hell this plot point will result in Wick getting double-crossed, having to shoot his way through literally hundreds of enemies coming at him from all sides, then not only am I sure you've never seen a single action flick, but you might have been in a coma for the last four decades.

However, the lack of a nuanced script doesn't really matter in this case, since the onslaught of expertly executed action sequences keeps our adrenaline pumping while the creative world-building engages our imagination at every turn, enough to turn John Wick: Chapter 2 into one of the most exhilarating and brains-to-the-wall entertaining action flicks since, well, the first John Wick. The underground world of assassins, with its own currency, hotels, tailors, sommeliers (Clever name for gun experts), and even a network of spies disguised as homeless people is so intricately laid out, that I'd be shocked if an open world sandbox game about this universe isn't being developed as I type these words. The secret world of John Wick is so fascinating, that I could easily watch an entire movie about a switchboard office operated entirely by women with head-to-toe tattoos, all wearing "slutty secretary" Halloween costumes.

The second installment is again directed by Chad Stahelski, a stunt coordinator who's proficient with martial arts. Stahelski has so much confidence in the cast's training and athletic ability, that he has no problem with static wide shots that go on for longer than a second. Who knew that letting the audience actually see what's going on by not resorting to ADHD quick cuts and shaky cam would create breathtaking action? John Wick: Chapter 2 is an action junkie's wet dream.