Boy, Did I Get a Wrong Number!

Olive Films // Unrated // January 24, 2017
List Price: $29.95 [Buy now and save at Amazon]
Review by Stuart Galbraith IV | posted February 9, 2017 | E-mail the Author
Beloved entertainer Bob Hope headlined many ‘40s and ‘50s comedies that still hold up quite well today: The Ghost Breakers (1940), Road to Utopia (1946), My Favorite Brunette (1947), Son of Paleface (1952), etc. He experimented a bit in the 1950s, appearing as Eddie Foy in The Seven Little Foys (1955) and had a rare dramatic turn as Mayor Jimmy Walker in Beau James (1957). By the early 1960s, however, Hope seemed content with mostly ordinary, formula comedies that rarely taxed his energies, and which were just one facet of the busy comedian's activities, which also included a steady stream of television specials, live appearances, cameos in other movies, and tours of military bases.

Boy, Did I Get a Wrong Number! (1966) earned the distinction (?) of making Harry Medved & Randy Dreyfuss's (and Harry's bother, Michael's) list of The 50 Worst Films of All Time, a popular 1978 book, but several other Hope movies, especially The Private Navy of Sgt. O'Farrell (1968) are much worse. Wrong Number isn't so much terrible as it is tired, uninspired, and cheap looking. 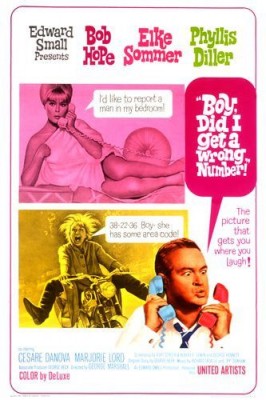 The premise shows mild promise. French sexpot Didi (Elke Sommer) is tired of making movies (not commercials, as Wikipedia's entry claims) that invariably call upon her to disrobe and take bubble baths. She storms off the set of her Hollywood debut, helmed by longtime director boyfriend Pepe Pepponi (Cesare Danova). She hides out in a hotel, but for her fame can't leave the room to buy food.

On the telephone, she's accidentally connected by a clumsy switchboard operator (Joyce Jameson) to a total stranger: struggling realtor Tom Meade (Bob Hope). She begs him to bring over some grub, and he sheepishly accepts the assignment. He's married to doting housewife Martha (Marjorie Lord) and has two kids, Doris (Terry Burnham*) and Larry (Kevin Taylor), but inexorably is drawn to sexy Didi, even though this family-friendly movie makes pretty clear from start that anything approaching sexual relations ain't gonna happen. (Quite unlike the real Hope, a notorious philanderer.) Later, he comes up with the idea to stash her away at a family cabin in the woods he's trying to unload, this despite the fact that his gargoyle of a housemaid, Lily (Phyllis Diller), listening in on her employer's calls, is all too aware of what's going on.

The rote nature of Wrong Number's production reminded this reviewer of Elvis Presley's movies of the same period, ground out with similar dispirited energy. So much so, in fact, one could swap Hope and Elvis in the other's vehicles with minimal effort. Take out the songs and add wisecracks, and Hope could star in Elvis's terrible Harum Scarum, released the same year, with Elvis in Boy, Did I Get a Wrong Number!. Take out Hope's wisecracks, add a few innocuous songs, make Martha Elvis's girlfriend instead of his wife, and - voilà! One can almost hear Elvis's title tune: "Boy, did I get a wrong number! I was on hold while doing a rhumba…"

The lack of effort and inspiration reduces the picture to the level of a greatly protracted sitcom, with production values barely at that level. The sets look utilitarian at best, cheap at worst. (The cabin interiors are particularly perfunctory.) There are glaring continuity errors, such as when in the last act a big tub of soapy bubbles spills out all over the cabin living room, only to disappear and reappear throughout the climax. Hope's wisecracks maintain his usual effortless comic timing, but the jokes just aren't funny, and the visual slapstick is strained and clumsy. Much of the picture has Didi zonked out on sleeping pills, with Hope dragging her lifeless, half-naked body hither and yon, but Sommer is constantly positioning herself and moving around in these scenes, apparently to avoid injury.

The movie's writers, mostly drawn from TV, are clueless when it comes to European sex goddesses. A German speaking English with a German-French accent, Sommer's character always refers to herself in the third person: "Didi is hungry!" "Didi is unhappy!" etc. They may have had a Brigit Bardot or Claudia Cardinale in mind, but they were busy with directors like Godard and Visconti, not bubble-brains taking bubble baths in Hollywood. Didi is also profoundly stupid and selfish, while Martha selflessly waits on her husband endlessly, and Lily is a grotesque caricature. It's not a very flattering film for women.

Phyllis Diller apparently impressed Hope, who signed her to a five-picture deal (ultimately co-starring with Hope in two more features and lots of TV specials). She tries hard to liven things up, but the mostly passive sidekick role doesn't afford her many chances.

Apropos of nothing, the picture does earn some kind of award for the longevity of its stars. Hope made it (just barely) to 100, while Phyllis Diller and Marjorie Lord died at 95 and 97, respectively.

Filmed for 1.85:1 widescreen, Boy, Did I Get a Wrong Number! looks okay, its 1080p transfer about as inspiring as the film. Colors and detail are okay, the picture looking fairly grainy at times, but reasonably good. The 1.0 DTS-HD Master Audio (English mono) audio is likewise fine, and optional English subtitles are offered. No Extra Features.

Hope phoning it in and a general air of "Let's get this in the can so we can all go home" drag the picture down to TV sitcom level (or less than that), but Hope completists might still want to see it. Rent It.

* Terry Burnham, best remembered for the Twilight Zone episode "Nightmare as a Child," died relatively young but, according to the IMDb, that was only the beginning of her strange fame. Her bizarre, sad entry there is worth reading.