It had to happen sooner or later- Tyler Perry's enduring Madea, played by Perry himself in drag, gets a Halloween movie in her 12th screen appearance. My movie-watching experience has shown that men in drag can be really funny or really annoying, and while I've thought Madea has a lot of potential "she" unfortunately falls closer to the annoying side of things in most cases. As someone who often watches bad movies just to marvel at how bad they are, I was really intrigued with Madea's first movie Diary of a Mad Black Woman, where she was not the title character but rather a friend of hers, and saw that Tyler Perry made some honest attempts at heavy-handed drama where as Madea he consoled the lead character over what to do about her abusive husband. I'm sorry, but asking the audience to accept a guy in drag as a serious character, especially when you've already had him provide humor earlier, is just asking too much. Since then in Madea's several other movie appearances, she's been played mostly for laughs but Perry still hasn't been able to resist letting her get heavy-handed again in a few moments. 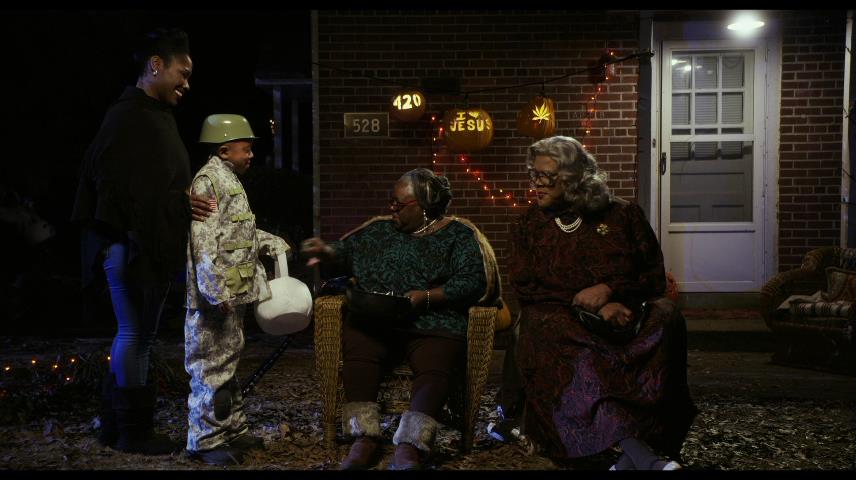 A Madea Halloween would seem to be a potentially funny concept to put this character into, as unlike Christmas (which she's already done a movie for) Halloween is all about fun and scares and the promotional materials made this movie look promising. As he's done in most of the previous movies, Tyler Perry not only plays Madea in drag but also a more conventional role looking mostly like himself as Brian, the father of troublemaking daughter Tiffany (Diamond White), and as Brian's elderly father Joe. Tiffany's route to school includes going past a fraternity house that is close to their home, and she and her friends often stop by to flirt with the members there. The frat is planning a big Halloween party with an emphasis on sexy costumes rather than scary, and Tiffany has been invited along with her friend Aday (Liza Koshy) but Brian won't allow her to go under any circumstances. As he can't be home the entire night, he calls upon Madea to come over and make sure she doesn't sneak out. She does, bringing Joe along with her as well as Aunt Bam (Cassi Davis) and their friend Hattie (Patrice Lovely). It seems the only reason the other three are brought along is because Madea wouldn't have enough material to carry on her own, and once they arrive at the house they all launch into a lengthy "routine" similar to what they've done in their previous movies where they yell back and forth in attempts to make the audience laugh about how old they are- in this instance they focus a lot on how Aunt Bam can't pee more than a few drops at a time- hilarious, right?

I would bet that a good percentage of viewers would either walk out of the theater or stop watching the disc by this point, but braving the rest of the movie we find that Tiffany and her friend aren't going to let these old people ruin their fun. Being that it's Halloween, they try to scare them by making up a story about how the house's previous owner went nuts and killed his family and their ghosts still haunt the place to this day. The girls then sneak out, but Madea and crew soon find them gone and crash the party themselves trying to find them- eventually getting the cops to shut it down. This sparks some back-and-forth pranking as each side tries to get revenge on the other, mainly with the fraternity members rigging up tricks to convince Madea that Brian's house really is haunted. None of this is very funny nor even remotely scary, unless you're scared by the fact that a few people actually found this movie to be funny. The Halloween setting never gets used to its full advantage, with the usual "old people" humor being overused with Madea throwing in a few comments about her supposedly more salacious past where she was a stripper and was placed on the terrorist watch list. Aunt Bam has a running "gag" being high on marijuana most of the time, but with a legal prescription that she waves in everyone's face. Perry still can't resist throwing in a sappy moment where as both Madea and Tiffany's father, the two of them confront her about how she ought to have a bit more respect for him. You may have been enticed a bit by that picture of Madea with a chainsaw which is on the disc's back cover and shows during the "loading" screen; it was certainly the part I was most looking forward to but it turns out it's never included at all in the actual movie! 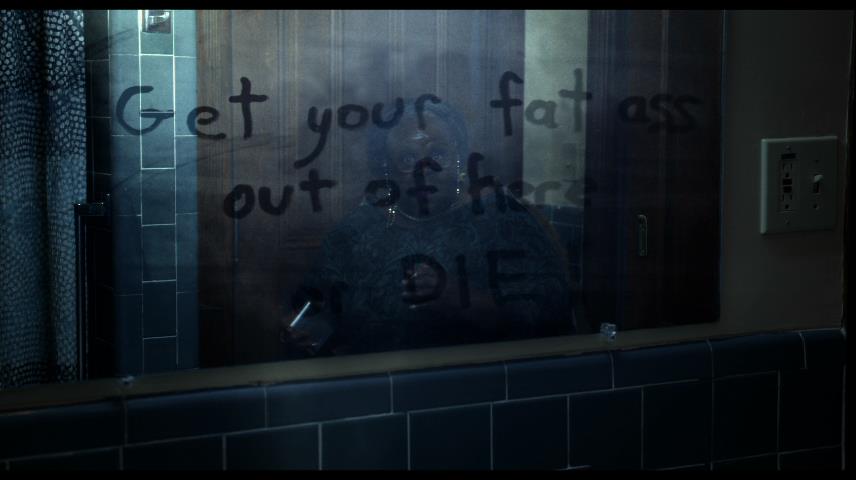 Shot digitally in a 1.85 ratio, the picture is as nicely detailed as you would expect from a Blu-Ray disc but I did notice some odd analog-like "noise" in many dark shots, likely a by-product of the cameras being used. Some shots also looked less sharp than others, but overall this movie looks about as good as it deserves to.

The 5.1 audio mix in DTS Master Audio is mostly pedestrian with dialogue kept up front, but serves up a few surprises in the surround channels, the first coming right about when I'd figured they simply weren't going to use them here. They come to life during moments of prank-scaring, such as when the power in the house fluctuates to make everyone think the place is haunted, and the voice of a "ghost" even shows up in the rears later.

Hearing-impaired subtitles are included along with standard English and Spanish subs. 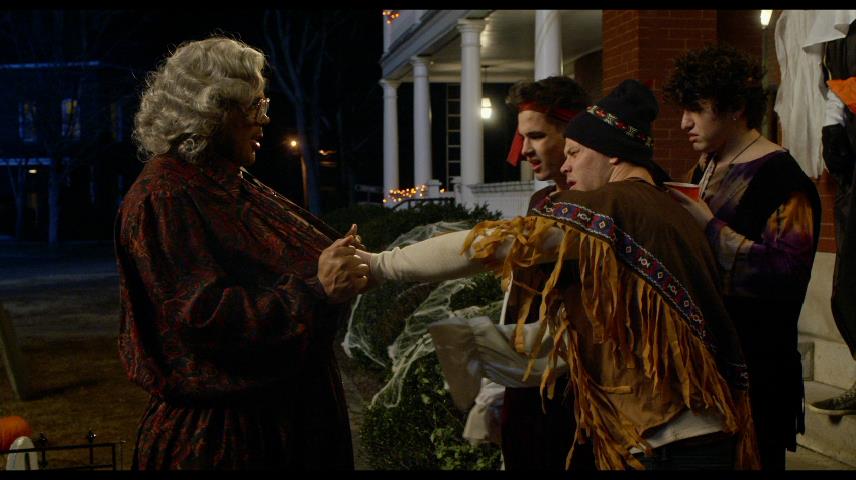 A nearly 10-minute featurette titled "Why We Love Madea" looks back at her previous screen appearances, with Tyler Perry saying the main reason people love her is because "she tells it like it is." It also goes a bit into the making of A Madea Halloween with some production footage (and I gotta say that these small digital cameras don't make a production look nearly as much like a "real" movie as film cameras do) and Perry making a rather shocking confession that he doesn't really like to wear all the costumes and makeup!

A shorter featurette is titled "Boo! From the Crew" but it's really from the cast, with several of them playfully saying "Boo!" to the camera which looks like they were just reaching for something extra to put on the disc. The disc opens with HD but compressed trailers for A Madea Christmas, Madea's Big Happy Family, Madea's Witness Protection, The Great Gilly Hopkins and Mr. Church (going all out with trailers for every Madea movie thus far in order would've been something to see.) 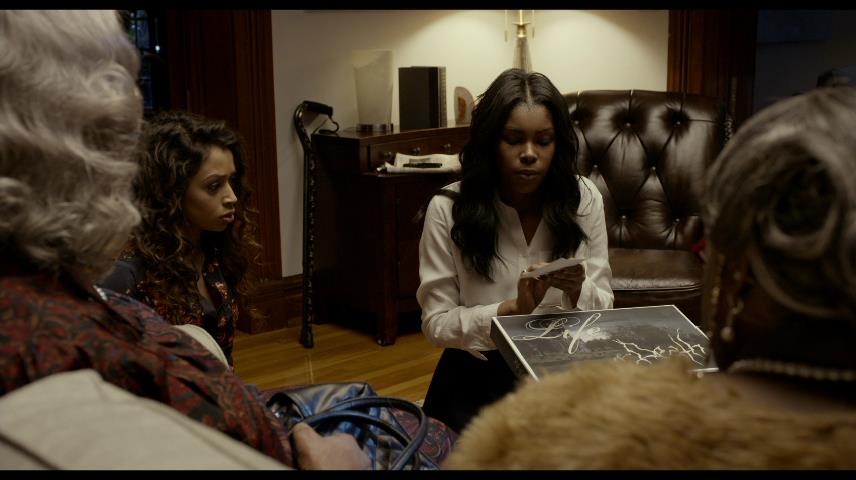 A Madea Halloween certainly had potential, but aside from the party and phony scare pranks it's really just more of the same. These movies consistently do good business at the box office, with this one having beat out at least two "bigger" movies released at the same time, so obviously some people find them appealing but this one isn't going to win Perry and company any new fans.