Race for the Yankee Zephyr 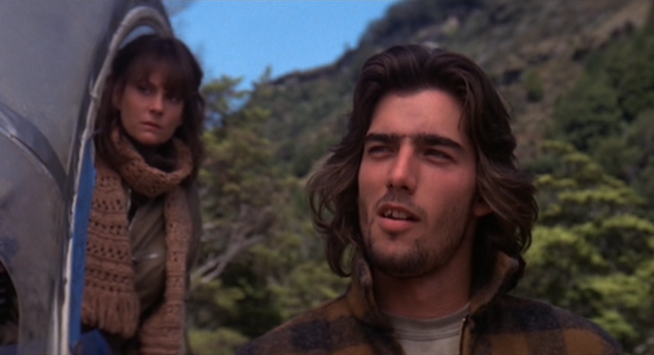 The 1981 adventure flick Race for the Yankee Zephyr (also known as Treasure of the Yankee Zephyr) first caught my eye when it was excerpted in the "Ozploitation" documentary Not Quite Hollywood. It wasn't available on US DVD in those late-'00s dark ages, so I filed it away in my mind as a flick to keep an eye out for. Now, at long last, MGM has released a DVD-R of the movie, with a decent-looking transfer, as part of their manufactured-on-demand (MOD) "Limited Edition Collection." Was it worth the wait? Eh...

Yankee Zephyr was originally supposed to re-team writer Everett De Roche and director Richard Franklin, who together had made the Australian genre classics Patrick and Road Games. One can't help imagining how much tenser and more exciting this movie would have been with a skilled Hitchcock acolyte like Franklin behind the camera. As it is, the finished product has been relocated to New Zealand and Blow Up actor David Hemmings has taken over directorial duties. These alterations make for a typically entertaining action flick with some gorgeous natural scenery. But that's it. The movie is a pleasant time-killer instead of the madcap thrill ride it attempts to be.

Ken Wahl, of The Wanderers and Wiseguy, seems out of his element as Barney, a deer hunter and bush helicopter pilot with a cartoonishly drunken partner, nicknamed Gibbie (Donald Pleasence). Barney is clearly supposed to be a lovable rogue of the type pretty much perfected by Harrison Ford. (Yes, Yankee Zephyr was in production at roughly the same time as Raiders of the Lost Ark, but one can easily be forgiven for presuming this was a knock-off made in the wake of Raiders' blockbuster success.) It's little surprise that this helicopter pilot is no Han Solo but, frustratingly, both Wahl and his character are largely blank for most of the movie. Not wooden, no. Still likable, sure. But, from first frame to last, I have no idea who the heck this man is.

Unfortunately, this vagueness is not unique to Wahl's character. Gibbie is a lovable drunk, but little more. Gibbie's daughter Sally (Lesley Ann Warren), the film's love interest, is just a fickle woman who, based on the requirements of a scene, flip-flops between scolding the male heroes and admiring them. (Also, at one point, she gets into a bathtub fully clothed, then slowly pulls off her layers, preserving the film's PG rating, but still providing a pseudo-wet-T-shirt moment that doesn't seem called for.) Everett De Roche is typically a much more imaginative writer -- he also wrote the cult classics Razorback and Long Weekend -- so one suspects the flimsiness of this movie's script either is the result of too many rewrites, or not enough.

After all, the actual premise of Yankee Zephyr is pretty solid. A US military plane, the Yankee Zephyr, goes missing during World War II, along with its cargo of Christmas gifts, medals, booze, and millions in gold bullion. In the present day, a misbegotten deer hunt leaves Gibbie stranded in the wilderness, where he stumbles upon the wrecked plane. With his one-track mind, Gibbie eagerly seizes upon the crates of Old Crow, snags a few army medals, and blissfully ignores the boxes and boxes full of gold bars. When he goes to an antique shop to hock the medals, the dealer alerts a wealthy gangster named Mr. Brown (George Peppard, as hammy as Donald Pleasence but arguably more enjoyable) who knows exactly what is in the belly of that plane. Once Barney is confronted by Mr. Brown and his gang of gunmen, looking for Gibbie to find out the location of the plane, he realizes there must be something pretty valuable inside. So, as per the title, the good guys and bad guys are in a race to get to the plane first.

When the film is focused on action setpieces, it mostly succeeds. This is largely why the second half of the film -- which includes a handful of shoot-outs, plenty of explosions, and chase scenes both by land and by sea -- is more satisfying than the pokey first half. However, even at its slickest, there's a sense that the film didn't have quite enough budget to fulfill the filmmakers' vision. A lot of corners were cut: there's blatant bad dubbing, obvious stunt people subbing in for the stars, and even a Texas Switch as flagrant as the one in Airplane!.

According to IMDB, this movie was originally released in the US with an expurgated 91-minute running time, but this MGM release seems to be uncut, with a running time just under 110 minutes.

The DVD
Race for the Yankee Zephyr comes as an MOD DVD-R, as part of the MGM Limited Edition Collection.

The Video:
Detail is pretty soft for this widescreen 2.35:1 transfer, with some noticeable compression artifacts and halo-ing throughout. That said, the film elements seem to be in good shape, with little distracting dirt and damage and pleasingly saturated colors. The first 10 minutes of the film are slightly windowboxed because the opening credits sometimes hover dangerously close to the edge of the frame.

The Audio:
No major complaints with the Dolby 2.0 mono audio. Music and effects are clean and effectively mixed. Dialogue is mostly clear, although there is a lot of post-dubbing that sticks out like a sore thumb and often doesn't fit into the characters' mouths onscreen. No subtitles or captions.

Special Features:
None. After all, this is an O.G.-style MOD disc that only has chapter breaks every 10 minutes. You thought there might be a trailer? Ha.

Final Thoughts:
Race for the Yankee Zephyr has many fun moments, but the characters are too thin to distract from the flick's scattered stretches of dullness. You might find this a worthwhile purchase if you're in the mood for an undemanding throwback adventure. Otherwise, just Rent It.