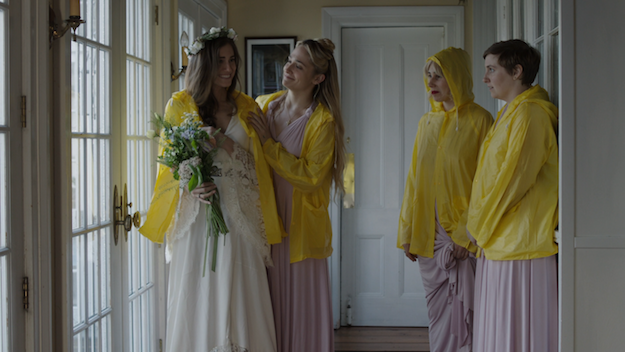 The penultimate season of Lena Dunham's hit HBO show about bougie twentysomethings, Girls, comes to Blu-ray hyped as the best batch of episodes in the show's entire run. To these eyes, the fifth season is narratively strong and inventive when taken as a whole, but it suffers from the same slow start that cooled some viewers' enthusiasm for the fourth season.

Admittedly, the first episode from this year, written and directed by show creator and star Lena Dunham, is a gem. Simply titled "Wedding Day," it is set at the wedding of Marnie (Allison Williams) and Desi (Ebon Moss-Bachrach), the hippie-dippy musical collaborators turned ill-advised lovers. While much of the season sends the ensemble of characters off on their own separate trajectories, the conceit of a wedding allows everyone to be in the same place at once, to maximum awkward effect. Shoshanna (Zosia Mamet) returns from her new job in Japan, only to become a pawn in Marnie's passive-aggressive bridezilla behavior. Love triangles abound: Jessa (Jemima Kirke) and Adam (Adam Driver) flirt with getting together, despite how it might impact Hannah (Dunham), Jessa's bestie and Adam's ex; Hannah brings her new schoolteacher beau Fran (Jake Lacy) to the wedding, which makes for some painful exchanges with Adam; and over in the corner, Ray (Alex Karpovsky) sits stewing, sipping beer, and quietly praying that Marnie will come to her senses and leave Desi at the altar for him instead.

The episode is fun and funny, it re-establishes the characters effectively, and it sets up the conflicts that are going to play out over the next ten shows. The bummer is that the show takes another 4 episodes to fully clear its throat and start effectively exploring the ideas it sets up in "Wedding Day." There are a wealth of storylines this season, but these early episodes have to juggle so much plot development that a lot of thematic potential is squandered. Shoshanna's trip to Japan, which felt incredibly promising at the end of season 4, is given unfortunate short shrift -- presumably for budget reasons -- and plays like oddly low-stakes filler, until the character inevitably gets brought back to New York, to face the boyfriend she no longer wants (Jason Ritter). Meanwhile, the dysfunctional, strained relationship of Hannah's parents (Becky Ann Baker and Peter Scolari), which provided significant emotional oomph to the fourth season, is initially dealt with here in ways that are relatively shallow and pat.

Most frustrating is that, for too long, the show has too few ideas for what to do with the ostensible lead character, Hannah. It becomes clear pretty quickly that she is too free-spirited for her relationship with "nice" but ordinary Fran to go the distance or for her job as a schoolteacher to provide her with the fulfillment that she seeks. Yet the show leaves her in a frustrating holding pattern and essentially sidelines her until it can figure out what to do with her in the season's second half.

But what a second half. Starting with the episode, "The Panic in Central Park" -- in which Marnie runs into her ex, Charlie (Christopher Abbott), and decides to entertain the idea of life without her new husband -- the show starts to reapply the "Wedding Day" pressure to its characters, and things start to get more interesting. Hannah finds out about Jessa and Adam, and it sends her into a tailspin. Hannah's gay ex Elijah (Andrew Rannells) gets into a complicated relationship with a famous news anchor (Corey Stoll) that leads him to question what he values in a partner. Even the relationship between Hannah's parents regains its poignancy as the notion of finding happiness before you run out the clock on life is given more weight.

As usual, the cast is uniformly adept at balancing the obliviousness and self-consciousness of their characters. While some interesting side characters resurface, such as Jenny Slate's wunderkind writer and Aidy Bryant's vapid branding manager, there is a smaller pool than usual of notable new guest stars to bounce off of the main cast. Stand-up comics Bridget Everett and Baron Vaughn pop up in the wedding episode, Lucy Liu is the star of a show-within-the-show that Adam appears on, Japanese heart throb Hiro Mizushima plays a shy coworker who likes Shoshanna, Guillermo Diaz is hilarious as a potentially sketchy guy who picks Hannah up as a hitchhiker, and Lisa Bonet is ravishing and note-perfect as an Earth Mother friend of Desi's.

If it sounds like I got too nitpicky or too down on Girls this season, it is only because it can be such a stellar program when it fires on all cylinders, which makes the show frankly annoying to watch when it treads narrative water or settles for being good instead of great. The fact that, once again, a season of the show ended better than it started gives me cautious hope, as we enter the final, sixth season (currently airing on HBO), that Dunham and her collaborators -- including writer-director Jenni Konner, writer-producer Judd Apatow, and directors Jesse Peretz, Jamie Babbit, and Richard Shepard -- can deliver the kind of wrap-up that both the fans and these characters deserve. 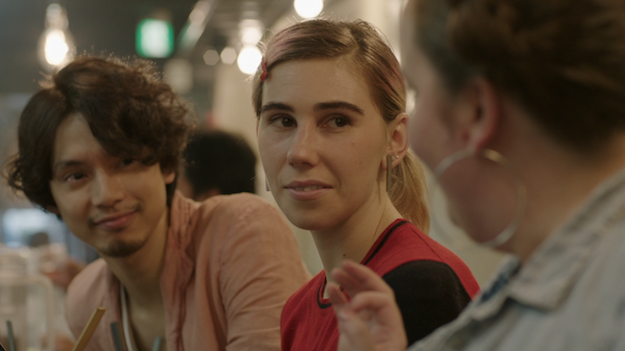 The Blu-ray
Girls: The Complete Fifth Season is presented on two Blu-rays. A digital HD code for Ultraviolet or iTunes is also included.

The Video & Audio:
The A/V presentation is on par with previous seasons, which is to say excellent. No discernible flaws in the AVC-encoded 1080p 1.78:1 video presentation, with strong colors and clarity. The English DTS-HD MA 5.1 surround audio is cleanly mixed, with source music cues getting forceful surround placement and the dialogue always being crisp and comprehensible. As usual, there are two dubbed audio options: French DTS 5.1 surround and Spanish DTS 2.0 stereo. Subtitles-wise, you get English SDH, French, Spanish, Danish, Finnish, Norwegian, and Swedish.

Final Thoughts:
At this point, Girls is a well-oiled comedy-and-pathos machine, which makes some of the early merely-good episodes in this fifth season fairly frustrating. Overall, though, the show continues to push its ensemble of characters in unexpected and entertainingly fruitful directions. Highly Recommended. 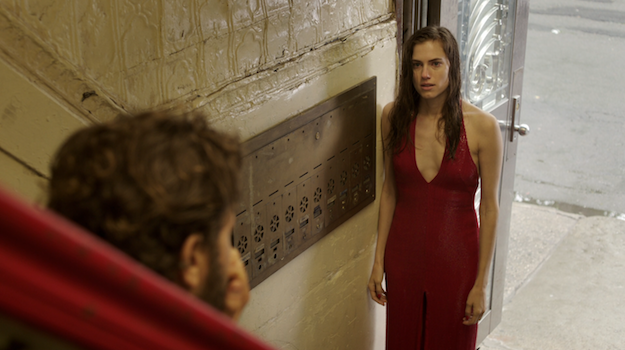