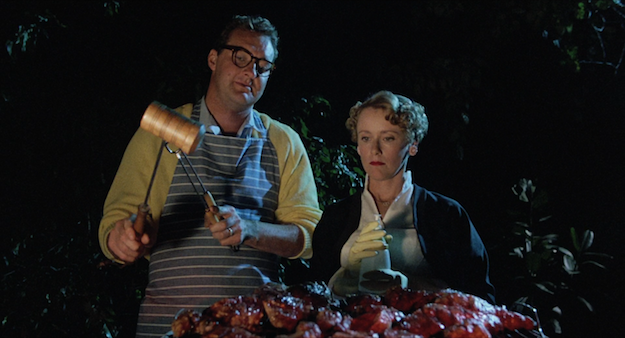 Randy Quaid is a truly excellent actor. This fact can be easy to miss these days, when his name mostly brings to mind insane tabloid shenanigans and video missives that one cannot unsee. Honestly, it was kind of easy to miss before then, when his name brought to mind an array of puppy-doggish simpletons like Cousin Eddie in the Vacation movies or his Oscar-nominated role in The Last Detail.

One of the main pleasures of the 1950s-set horror satire Parents (released in 1989) is Quaid's unexpected performance. He plays Nick Laemle, a suburban '50s dad with a genial Father Knows Best exterior that masks a far darker personality lurking underneath. This is Ward Cleaver, but with the measured bearing and macabre appetites of a Vincent Price ghoul. When Nick's sensitive young son Michael (Bryan Madorsky) fails to live to up to his expectations, he scolds him with sedated vocal tones, but he can barely conceal his anger. His eyes betray the flitting impulse to commit filicide and start over fresh with a new, better son.

Quaid is paired perfectly with Mary Beth Hurt who, as mom Lily, hits the right note of "sunny, plastic homemaker" without ever coming across as too broad. When little Michael hides some ribs and has Lily play "hot and cold" to find them, she clearly has enough affection for her son that she willingly plays along. As seen through Michael's eyes, she's not exactly on his team -- she's still a parent, after all -- but there's just a little more room for connection there. Still, it's not enough to make Lily seem any less alien when Michael watches her launch into an unexplained laughing fit, after the Laemles go over to the neighbors for bridge and enjoy one too many Long Island Iced Teas.

Parents beautifully captures the sensation of being a school-age child, frightened and even disturbed by the way adults behave. The film takes it up a notch by planting the idea that these particular adults might also be cannibalistic psychos. Mom always seems to be serving unidentified meat for dinner, and calling it "leftovers," but Michael never remembers what it is supposed to be left over from. The film posits that it might all be in Michael's morbidly overactive imagination, by giving him nightmares of drowning in a pool of blood and hallucinations of being strangled by sentient sausages, but (*semi-spoiler, not really a big deal*) it's clear almost from the start that part of what keeps mom and dad's relationship spicy are the human organs Pop brings home from the Toxico* medical testing facility where he works. (*end semi-spoiler*)

Sandy Dennis plays the school psychologist who tries to help Michael when he acts out in class and says unintentionally provocative things about sticking cats in the oven. She tries to assure Michael that all this weirdness is in his head, but he (and we) cannot be so sure.

Sexual confusion plays a significant part in little Michael's current neuroses, and the film makes none-too-subtle connections between Michael watching his parents eating this mystery flesh and walking in on them in a compromising position. Juno Mills-Cockell plays an outcast girl, Sheila, who is a little older and much taller than Michael, whose alienation from her parents and inappropriate imagination give them something to connect over. Michael clearly wants to act out against parents, and Sheila already has a playbook to share with Michael.

Many reviews of Parents complain that it can't decide whether it wants to be a satire, a coming-of-age drama, or a horror film. As if those things ever have to be mutually exclusive. I immensely respect Parents, but even I have to admit that it doesn't completely pull off what it sets out to do. The mash-up of genres is not the problem though. Part of it might be that the style and atmosphere of the film is much stronger than the bare bones plot. If there was a really cracking yarn at the center of all this, I think the concerns about not enough horror or not enough comedy would dissipate. Part of the problem also might be the film's portrayal of little Michael. Bryan Madorsky has an incredible presence and striking big eyes that perpetually exude the uncertain awkwardness of being a ten-year-old. Even so, the film sketches Michael's character too vaguely to fully connect with his uncomfortableness and fears.

But, even with its flaws, this is a film that should easily speak to all the unconventional moviegoers out there. The way that Parents plays with the notion that an authoritarian, emotionally withholding father is essentially the same as a dead-eyed psycho from your average serial-killer movie is worth the price of admission alone. 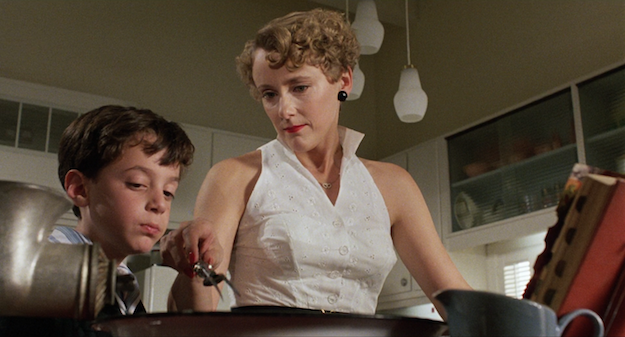 The Video:
The look of Parents is neither lush nor garishly over-the-top in its approximation of '50s suburbia, but the AVC-encoded 1080p 1.85:1 transfer still boasts a clean and satisfying look that serves the gently stylized world of the film. No major damage or instability. The feature is encoded with a decent bitrate that typically hovers in the high 20s (MBps), so no significant compression issues either.

The Audio:
No significant complaints from the DTS-HD MA 2.0 stereo audio. Some of the dialogue sounds a little limited, but that is probably the result of the original location recording, since quite a few moments (including one entire scene) have been noticeably ADRed. Otherwise, Jonathan Elias's atmospheric score soaks the film with the appropriate dread, and the handful of bouncy source music cues provide ironic counterpoint to the proceedings. The English SDH track comes in handy, even if you can hear the film well, for picking up some of the interesting asides that many of the actors throw away throughout the film.

- Balaban and Palef reflect on making the movie nearly 30 years ago, but seem to have quite sharp memories of the production. This is a brisk and highly informative discussion. Well worth a listen.


Final Thoughts:
Parents frequently confounds viewer expectations, which is both to its benefit and detriment. Even folks in the mood for a horror-tinged suburban satire or a Lynchian deadpan comedy might still walk away feeling like they didn't quite receive what they signed up for. But there's no denying Parents is admirably unique, with a distinct authorial personality, courtesy of writer Christopher Hawthorne and director Bob Balaban. If you're sick of formula, this one comes Recommended. 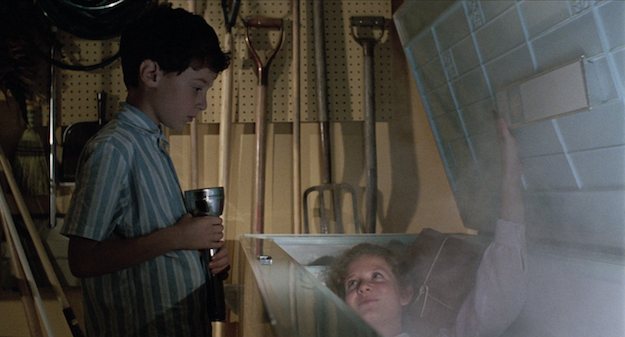