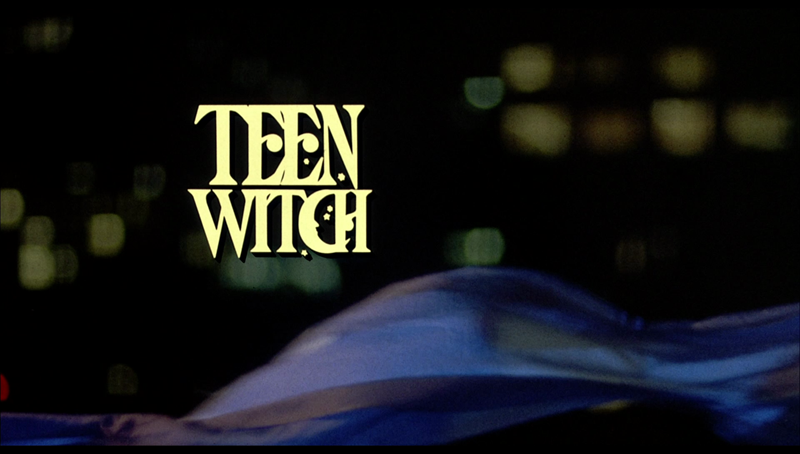 
The Movie
The teen comedy has really fallen off the map in recent years. Perhaps it's a result of the target audience abandoning traditional media, but it's hard to think of a fun comedy movie about teens that's made any impact since perhaps 2010's Easy A. It feels like if you're making a teen movie these days, it's got to be either a melodrama, a dystopian action film or a weepy romance. That certainly wasn't the case in the ‘80s, inarguably the golden age of the teen comedy (if not all teen film.) Everywhere you looked there was a high-concept comedy with teen life at the center of it, many of which dealt with some sort of transformation that changed the character's life (a perfect metaphor for the teenage years.) So, while the idea of a teen changing to become more popular was hardly anything new, Teen Witch put its own spin on the concept, and added magic to the mix.

Louise (Robyn Lively) isn't having the best time of her life, having been recently skipped a grade in school, and feeling like a little kid amongst her older classmates. Bullying teachers, an annoying younger brother (Joshua Miller) and an unrequited love for Brad, the football captain (Dan Gauthier) aren't helping either. What does make things better, on one dark and stormy night, is meeting Madame Serena (Poltergeist's Zelda Rubinstein), who informs her that she's descended from witches, and will receive her powers on her 16th birthday. Once imbued, she uses her new abilities to make life better for herself, but--in the process--drives away her best friend Polly (Mandy Ingber) and leaves herself with doubt that she would be popular without her spells. 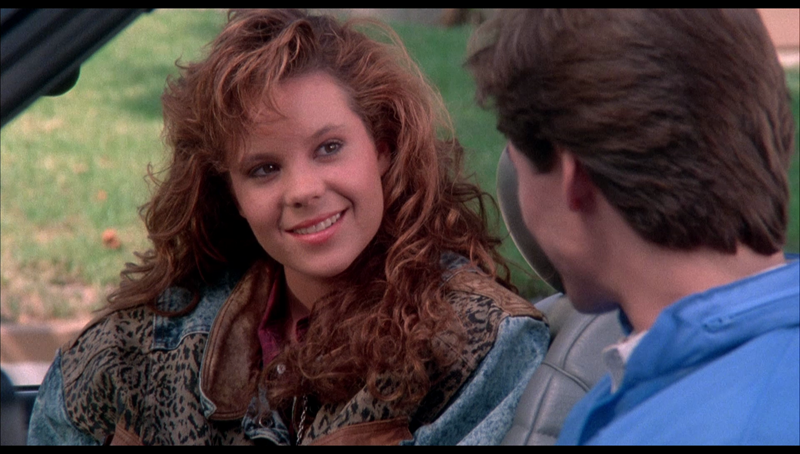 Dripping in ‘80s fashion and pop-culture, Teen Witch is powered by Lively's performance in the lead, as she's capable of portraying Louise's vulnerability perfectly. Whether it's her less-confident early-film persona or her magic-aided blossoming, the sense that she's not that sure of herself is easy to feel, and that, plus an innate sweetness, are key to making Louise an underdog you can get behind, because unlike many of these teen "ugly duckling" films, there's never a lot that separates her from the school's elite. There's no class division and certainly no major difference in looks between Louise and her would-be rival Randa, aside from the cheerleader's skimpier clothes and her hair color. Besides a year of age and a more conservative style, Louise's low-key personality is the main thing keeping her from ruling the school.

What makes Teen Witch different from the similar films of the era (other than the magic, which it shares with the raunchier Zapped!) is the music. It feels like a musical, due to the presence of several music-focused sequences, including a ridiculously joyful locker-room song-and-dance number titled "I Like Boys" and a montage set to the utterly on-the-nose "Popular Girl" (with lyrics that state explicitly "I'm gonna change my hair and make-up, soon you're gonna see, I'm gonna be the most popular girl") but it maintains a sense of "reality" and no one breaks into song. Well, someone technically does, and it results in what's probably the most memorable moment of the film, as Polly, in a spell-induced attempt to impress her crush, tears into an aggressive rap battle, performing the delightfully goofy "Top That." One listen and you will never get this song out of your head.

Teen Witch, thanks to a likable cast; some odd, yet memorable moments; a pile of ‘80s nostalgia and fun, silly music, is certainly an enjoyable movie to watch, but it's in no way a good one. You could rip this film apart any number of ways, including massive plot holes, a hugely-questionable core morality, a general lack of character development, any icky concept of romance and a disappointing ending. But one thing you can't complain about is the performance of Joshua Miller as Louise's brother Richie. As the homunculus Richie, Miller (who grew up to become a writer, including co-writing the great The Final Girls) delivers some of the best line readings in teen-film history, taking relatively simple, straightforward dialogue, like "You think you're hot stuff because you went to a dance" and "No one's coming to your Sweet 16 party, Louise" and making them indelible. It's a shame we don't have more of this kind of performance to fondly remember. But what's here is golden. 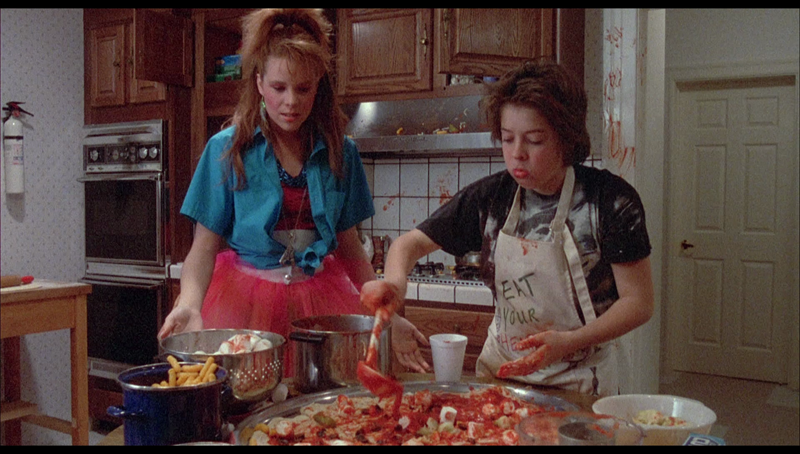 The Disc
Teen Witch previously was available on a bare-bones DVD courtesy of MGM, but now Kino (in partnership with Scorpion Releasing) has released a one-disc Blu-ray edition, which arrives in a standard Blu-ray keepcase sporting some awful cover art (from one of the film's posters) but makes up for it with Struzan-esque disc art. The Blu-ray features a static menu (with the same bad cover art, but backed by the song Popular Girl) with options to watch the film and check out the extras. There are no audio options and no subtitles.

The Quality
The 1.85:1, AVC-encoded 1080p transfer here is spot-on, and the best you've likely even seen the film look. As with many teen films of the ‘80s, color is key, and this presentation has no issue with the spectrum of hues on display, particularly the era-appropriate wardrobe. The level of fine detail is excellent, most evident in the clothes and Lively's curly hair. Nighttime scenes show no problems with excessive noise, while the film overall has a consistent, pleasing grain structure, and shows no obvious problems with either dirt and damage or compression artifacts. For a film most saw on VHS or SD cable, this release is pure eye-candy.

The musical that's not really a musical gets quality sound from a 2.0 DTS-HD Master Audio track that handles each element well, from the clear dialogue to the strong delivery of the variety of songs, be it the rap battle "Top That" or the poppy "I Like Boys". Separation between elements is fine, with sound effects clearly defined amongst frequent music and appropriately-prioritized voices (though the ADR of off-screen extras can be a bit obvious in spots.) Distortion is not a concern.

The Extras
Scorpion brought a lot to the table for this release, starting with an audio commentary featuring Lively, Ingber, Gauthier and Miller. The friendly quartet obviously has a lot of affection for the film, and have plenty to say about it, discussing its legacy and its gay fan base, the ‘80s and the film's semi-status as a musical. Throw in some fantastic easter eggs, talk about a remake and a live performance of "Top That", and it's a fun, informative track, powered by Lively's enthusiasm and Miller's personality.

Several lengthy (and not-so-lengthy) interviews cover some of the same topics as the commentary, but go further in-depth with the participants, including digging into their non-Teen Witch careers. Included in the sitdowns are Lively (23:19), Gauthier (20:14), Lisa "Randa" Fuller (3:50), Ingber (16:19), musicians Larry and Tom Weir (21:18) and a joint session with Lively and Ingber (15:38). Talk of castmates, favorite (and least favorite) scenes and auditions are a few of the many topics covered candidly, with some of the highlights including a Gauthier story about the Night Stalker, a chat about on-set crushes and info on Ingber's somewhat isolated production experience (as well as an unusually polite undercurrent involving the film's director.) The only negative here is the lack of participation from Miller.

Wrapping things up is the film's theatrical trailer (2:17), a very ‘80s plot-heavy preview. 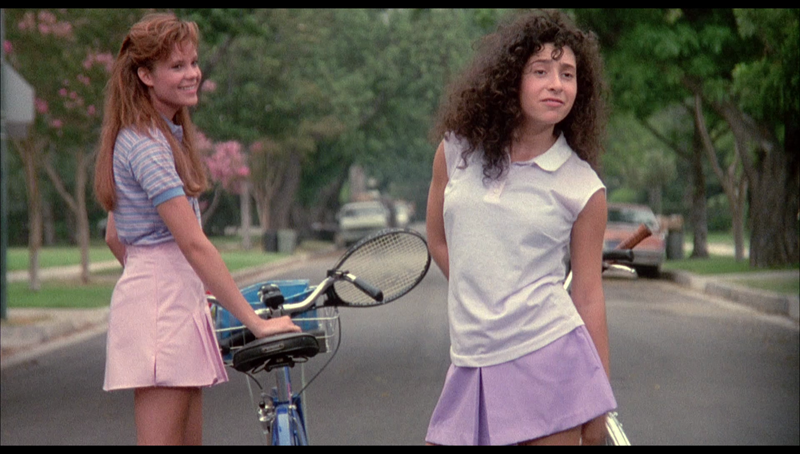 The Bottom Line
A fun, silly, nonsensical teen comedy/romance featuring a non-bombshell female lead seems almost quaint today, and though ‘80s nostalgia is certainly part of Teen Witch's charm, there's plenty about the film that enables it to overcome its shortcomings (empowered primarily by Lively and Miller.) Kino and Scorpion Releasing make a good team, putting out a quality audio/video presentation, alongside an in-depth collection of extras you wouldn't expect for a lesser-known film like this, but which the film's die-hard fan base will be thankful for. Francis Rizzo III is a native Long Islander, where he works in academia. In his spare time, he enjoys watching hockey, writing and spending time with his wife, daughter and puppy.Follow him on Twitter