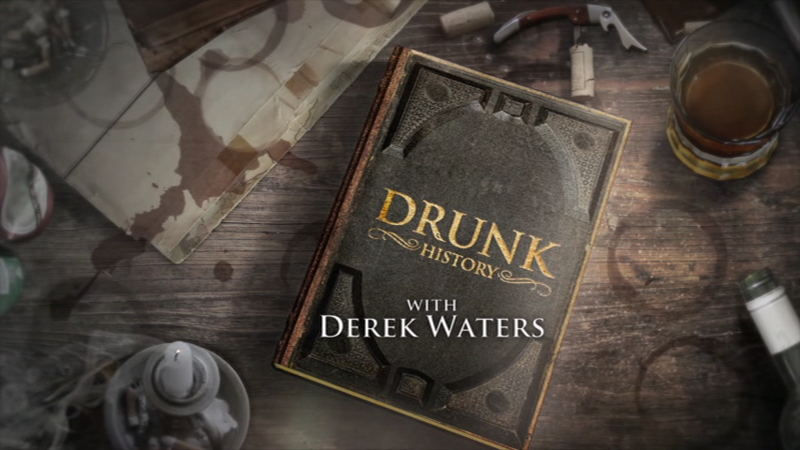 
The Story So Far...
Starting life as a web series, Derek Waters and Jeremy Konner's Drunk History builds on a brilliantly simple concept: people who are drunk love to tell stories and they usually have trouble doing so. So, if you focus that idea, and have those drunks only tell historical stories, and then recreate those stories, using the actual inebriated ramblings as the dialogue and big-name comedy guest stars, you get an ingenious little series. The show has aired for four seasons on Comedy Central, and the first three seasons have been released on DVD. DVDTalk has a few reviews.

The Show
The location-as-theme concept has run its course on Drunk History, so the focus is now on topics, with this season's episodes looking at things like historical siblings, famous landmarks and the delightfully-titled "S**t Shows." The overall concept remains the same, however, just without the interviews with locals, so you get more of the storytellers and more of the recreations, which is exactly what viewers want. Thus, when you get Bob Odenkirk telling the story of Disco Demolition night at Comiskey Park or Darryl Johnson spinning the tale of the construction of the Brooklyn Bridge, you get enough time to enjoy their off-the-cuff remarks and various flubs as they educate.

The stories are all over the place in this season, from well-known figures like Winston Churchill and FDR (played by Louie Anderson and Rich Fulcher) to minor (possibly made-up) tales like female pirate Sadie the Goat (whose run in with a violent bar bouncer is depicted by Kat Dennings and Ronda Rousey.) Among the most memorable of the 28 stories here, Crissle West's impassioned retelling of the Stonewall riots, Lauren Lapkus' strange tale of the Wright sister (portrayed by Jenna Fischer) and Lyric Lewis's engaging recap of Julia Child's early days (recreated by Michaela Watkins and Joe Lo Truglio) are easy picks as standouts. Sometimes it's the interesting historical moment, like Tess Lynch's odd story of the New York artichoke wars that makes it so good, but other times it's the great talent playing the past, like pairing Thomas Middleditch and Ron Funches on Devil's Island. 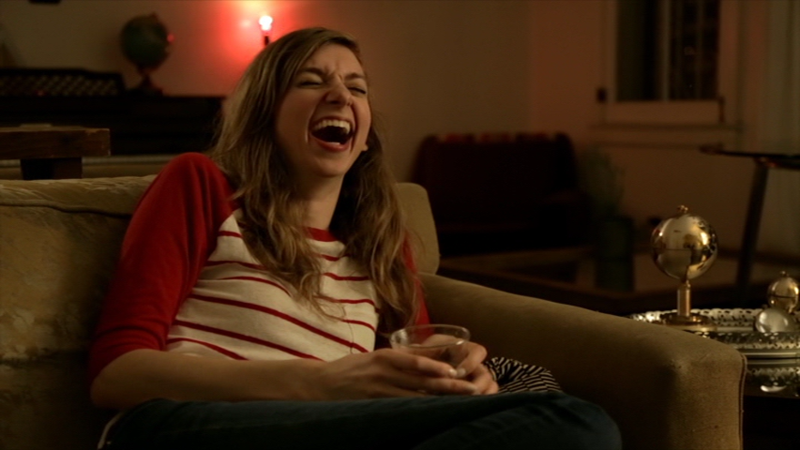 The odds were stacked against just about everyone however, when it came to finishing on top, considering an entire episode was devoted to one tale, and that tale was told by a man forever linked with it, as Lin-Manuel Miranda got drunk and spun the story of Alexander Hamilton. Utterly talented and quite funny, Miranda lets loose in sharing a cut-down version of his famed musical, and he's aided by a fantastic cast of re-enactors, including Alia Shawkat as Hamilton and Aubrey Plaza as Aaron Burr, along with Tony Hale, Bokeem Woodbine, David Wain and Dave Grohl. Throw in a raucous virtual guest appearance by a famous late-night drummer and you have what's essentially the perfect episode of Drunk History.

As has always been the case with this series, seeing the screw-ups get integrated into the recreations are small bits of joy, especially when it happens visually. There's something brilliantly silly about hearing Mike Still describe the Kopp Sisters drinking "1914 Drinks" only to actually see that on the labels of the bottles they sip from. Similarly, any time the on-screen titles closely follow what the storyteller said rather than what they meant, it's a guaranteed chuckle.) It's the candid moments with the storytellers that are always the most memorable, and which explain the most about the person telling the story. Paget Brewster (always a top participant) breaking down in tears while she talks about Eleanor Roosevelt and her Russian sniper friend is so endearing, as is Tymberlee Hill's attempt to overcome utter inebriation to discuss Ella Fitzgerald and Marilyn Monroe's friendship.

Season four features a large number of returning storytellers, including Eric Edelstein, Chris Romano, JD Ryznar, Kyle Kinane and many more, with just a few newcomers, like Odenkirk and Hill (who were re-enactors before), Miranda, Katie Nolan and Lyric Lewis. The absence of a few all-stars, like Jen Kirkman and Matt Gourley, was disappointing, but any season in which you get the riotous Jenny Slate, you can't go wrong, while Hill, Lewis and West are quickly establishing themselves as go-to narrators for great stories.

The re-enactment cast also features quite a few returning champions, including Funches, Hale, Taran Killam, Jason Ritter, Thomas Lennon, Colin Hanks, Patton Oswalt and Samm Levine. Josh Charles joins the party and does a great job in the story of famed con-man Lord Gordon Gordon, along with Liev Schreiber, Vanessa Bayer (as a wonderful Carrie Nation), Gabourey Sidibe, Kyle Mooney and Kevin Pollak. Though it's fun to see great comedians and actors like these, the series' more unusual casting decisions often are just as entertaining. In addition to Grohl's part on the Hamilton episode, Ben Folds, Dwight Yoakam and Green Day's Billie Joe Armstrong (as Charlie Chaplin, of all people) all offer a little something different than what most people know them for, while John Cho strikes a blow for race-blind casting, portraying William Shakespeare in the story of the theft of the Globe Theatre. 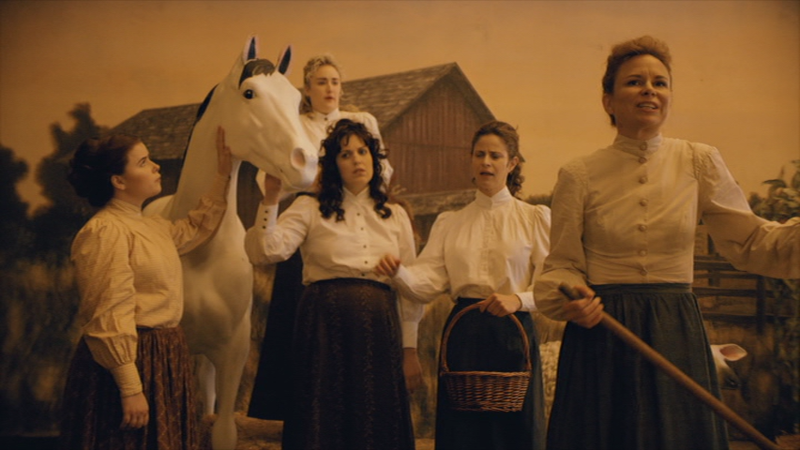 The DVDs
Packaged in a standard single-width keepcase with a tray for the second disc, Drunk History Season 4 arrives on two DVDs. The DVDs offer static, anamorphic widescreen menus with options to play all the episodes, select shows, adjust the setup and check out the extras. Following the pattern established in the first sets, audio options include Dolby Digital 5.1 and 2.0 tracks, while subtitles are available in English SDH.

The Quality
In an era of HD and Blu-rays, the anamorphic widescreen transfers on a SD DVD can't approximate the show's look in its initial airings, coming off soft and lacking in fine detail, which is a shame, because the production crew does fine work in crafting the re-creations. Color and fleshtones are solid throughout, and there are no major concerns with digital distractions, with video that just falls short of what we've seen before, rather than suffering any real slights.

The Dolby Digital 5.1 tracks are solid, yet simple presentations, giving a home to the voices in the center channel, while utilizing the sides and rear to boost the music. (The low-end doesn't get much to do, thanks to the structure of the show.) As a series built around single-person storytelling, the audio is limited aurally, but what's here sounds fine.

The Extras
The first extra is the series' 2016 election special (21:08), which patches together a trio of previously-aired presidential stories (Patrick Walsh on the election of 1800, Rich Fulcher on Abraham Lincoln as a lawyer and Jen Kirkman on Woodrow Wilson's wife Edith) with segments featuring Waters and Steve Bergin and around a hot tub. All three are enjoyable, but Kirkman is in top form, just owning her part of the party.

The remainder of the extras take the form of 22:30 of deleted and extended scenes culled from nine of the episodes, with highlights including Miranda's utterly filthy mouth, an impromptu Facetime session between Miranda and another storyteller, a drunken freestyle rap, Slate singing a new national anthem and Lapkus playing with Play-doh. The candid moments are some of the best of parts of Drunk History, so getting a few more is most welcome. 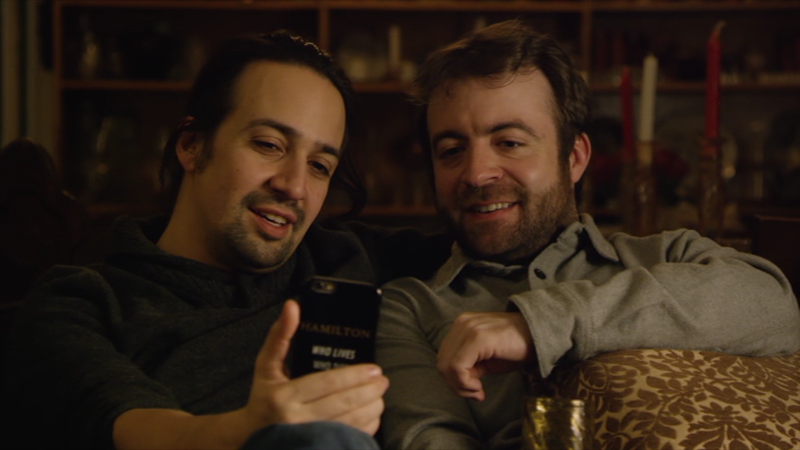 The Bottom Line
After four seasons, Drunk History hasn't lost any steam, though it has tweaked along the way, to make the show more streamlined, and the result is a show that gets plenty of laughs, but which will let you learn something you didn't already know. The presentation is solid, if not exactly exemplary, while the extras are fun, though increasingly limited as the years go by. Fans of the show will certainly want to have this set to revisit, with several great storytellers and a great contribution from Hamilton's Lin-Manuel Miranda. Francis Rizzo III is a native Long Islander, where he works in academia. In his spare time, he enjoys watching hockey, writing and spending time with his wife, daughter and puppy.Follow him on Twitter