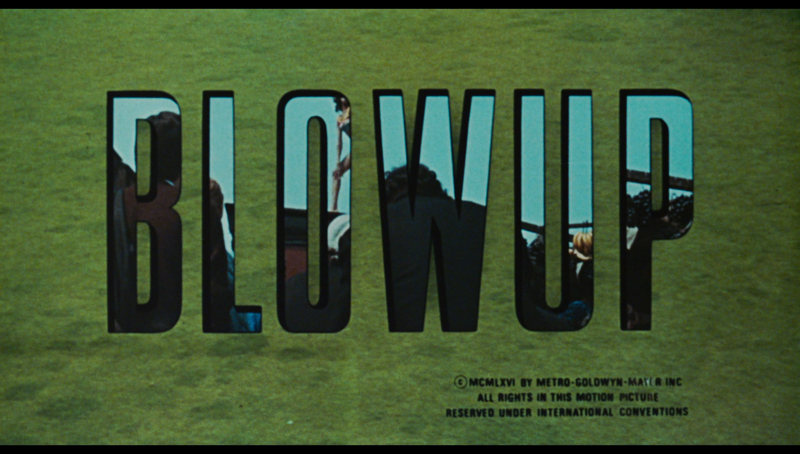 
The Movie
A veteran of the Criterion Collection and accepted pillar of capital-C Cinema, Michelangelo Antonioni had already long established himself as a top-flight director with films like La Notte and L'Avventura, when he decided to apply his talent to English-language film. It was a great pairing to take his exacting artistry and applying it to the visually-exciting world of 1960s London, in particular the fashion photography industry, even if his interests don't quite dovetail with most audiences, as he focuses on feeling and tone, rather than traditional plot and character development.

Thomas, a fashion photographer (David Hemmings), is introduced through two studio shoots--one a seductively intimate session with the slinky Verushka, the other with an aggressively controlled group of models he berates as he photographs. Who Thomas is when interacting with others is suggested at through these moments, but the real man emerges over the course of the rest of the film as he finds himself wound into a peculiar situation, as he casually photographs a couple enjoying time together in the park, and ends up as the possible witness to murder, with Jane (Vanessa Redgrave), the woman in the park, trying to get the pictures from him, for reasons that are unclear.

On the whole, the film is most likely about reality and how it can be manipulated, with Thomas' attempts to understand what he thinks he saw through the process of enlarging his photos again and again, serving as a key metaphor: the closer he looks, the less clear the picture is. That sense of a reality shifting and changing is evoked repeatedly throughout the film, in small, subtle ways that are easy to miss (rewarding multiple viewings) and in far more obvious moments, like the fillm's famous (or, depending on your opinion, infamous) final scene, which offers no answers to the film's mystery, in a scene that's the epitome of a 1960s art film. 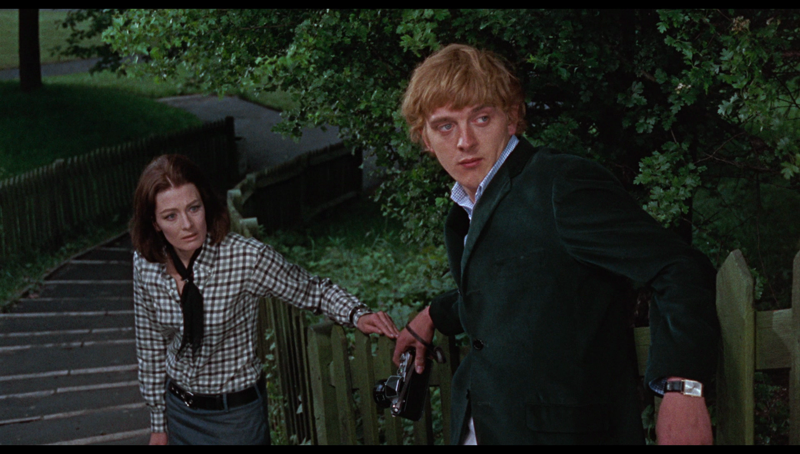 Some may find that finish a frustrating capper to a film that offered several stretches seemingly designed to test the patience of a modern filmgoer, whether it's long scenes of silence or moments that have no apparent purpose in service to the film's core story. Through these uncomfortably still moments and discordant bits, where the audience watches and is alone with their thoughts as they contemplate what they are seeing and how it connects to the mystery of what happens in the park, Antonioni pushes the viewer closer to the edge of a looming dread, but without any real imminent threat. The only thing hanging over Thomas' head (along with that of the viewer) is the unknown, which can be utterly frustrating, particularly when there's no pay-off.

Blow-Up leaves its cast without much to say for large portions of the film. Truly, the majority of the most memorable moments, including the photography process that lends the film its name and a romp between the lead and two young women that gave the movie its infamy, thanks to envelope-busting nudity, were dialogue-free. That doesn't mean there aren't some solid performances, as Hemmings is quite good at portraying Thomas' shifting moods, not to mention his spiral as the film moves forward, while Redgrave is believably inscrutable as the woman of questionable motives at the center of it all.

To enjoy or even just appreciate Blow-Up doesn't require a deep understanding of the concept of mediality or the mental feat of piecing together of story elements that aren't there (but which may have been at an early point in production), but rather just an acceptance of the film as an exercise in the power of aesthetics in filmmaking. Everything looks and sounds a very precise way, but lives in the mind of the beholder, not unlike the effect of a beloved painting which hangs on the wall, but does much more in the brain. Antonioni manipulated the medium and put his beautiful creation before us to enjoy, taking from it whatever we may see in the brushstrokes. 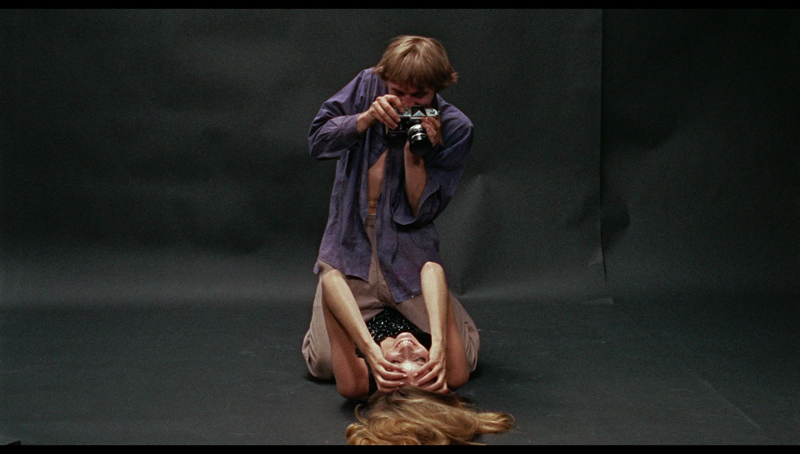 The Disc
Blow-Up (spine number 865) arrives on one Blu-ray disc in a starkly-designed digipak (with the film's key photo across the inside) which is held in a gorgeously simple slipcover (along with the title's book (see The Extras). The clean Criterion menu sits over a montage of clips from the film and the film's jazzy opening theme, and offers the choice to watch the film, navigate the timeline, select scenes and check out the special features. There are no audio options, though subtitles are available in English SDH.

The Quality
Aesthetics are the story of the day for Antonioni's Blow-Up, and this newly-restored AVC-encoded, 1080p, 1.85:1 transfer (created in 4K) delivers the goods, depicting all the heightened color and precisely filmed detail in beautiful quality. The enhanced hues of the film's world pop in this presentation, while sharpness and clarity are consistently high, with the right amount of grain maintained to achieve the correct look. Darker moments enjoy deep black levels, through, on the whole, the film falls further on the brighter side of the scale. The picture is impressively clean, and digital distractions are not a concern.

There are three key elements to Blow-Up in regards to the LPCM 1.0 track on this disc, and that the music, the environmentals and the sound effects, and all three sound terrific, along with the dialogue, which is clear and strong. The music, featuring jazzy instrumentals by Herbie Hancock and rock from The Yardbirds, is well separated from the other elements and crisp, while the environmentals and sound effects, which play a large role in the plot, are appropriately weighted in the mix. This disc captures the feel of the audio as it should be.

The Extras
A previous DVD from Warner Brothers included a commentary track from an Antonioni expert and a music-only track (an odd inclusion, considering the long stretches of silence), but those extras don't return on this release. Instead, the bonus content here kicks off with an excerpt from 2001's Michelangelo Antonioni: The Eye That Changed Cinema (5:30), featuring footage of his Cannes award for Blow-Up, along with an interview with Antonioni, in which he talks about shooting in England and America. There's not much heard from The Maestro in this set, so this extra is certainly welcome.

Blow Up of Blow-Up (53:53) is a new short documentary by Valentina Agostinis about the film, featuring interviews with a number of experts and people who were a part of the production. Covering a variety of topics connected to the film, the piece puts Blow-Up in the context of its time and visits some of the locations used for shooting, while sharing plenty of on-set tales, including Antonioni's role in the formation of Led Zeppelin. Well-made and loaded with good info, it's an enjoyable watch for fans of the film or its maker.

Two interviews with Hemmings--one short and one long--offer a peek into who he was as an actor and a person. The first (5:23), from 1968 and shot on the set of a film he was making, hears him talk about London and his preference for New York City, while sharing some thoughts on his Blow-Up character, while the the other (20:18), from a 1977 show called City Lights, gets more in-depth into the experience of a newly-successful actor in Hollywood. Combined, the two clips reveal the candid, intriguing man behind the role of Thomas.

Another interview, this time with Redgrave (44:44), was part of a series called "In Conversation", and took place in 2016 with historian Philippe Garner. Presented in black and white, it covers what it was like for the actress to work with Antonioni, her thoughts on film nudity and some of her humanitarian interests as well. At times, there are some issues of over-talking between the host and guest, as they aren't always in sync, but overall it's an interesting chat.

A final interview (8:53)--an excerpt from a 1989 sit-down with Jane Birkin, who played one of the two girls in the studio--is possibly the most interesting of the bunch, as she talks about auditioning, Antonioni and the controversy surrounding her nudity in the film. The most memorable moment of this clip however is when she talks about her life as a housewife, which is just a brutally miserable story.

A critical perspective on the film--"Antonioni's Hypnotic Vision"--is made up of two parts, "Modernism" (16:06) and "Photography" (29:49). In "Modernism", David Alan Mellor, curator and art historian at the University of Sussex looks at the influence of modernism in art on Antonioni's film (including the presence of modernist art in Blow-Up), while in the other, historian Philippe Garner and Walter Moser, head of the photographic collection at the Albertina museum in Vienna talk about his exploration of photography. Between the three, you're granted a better understanding of the importance of these topics in the movie and their presence and influence on the themes of Blow-Up, with a number of subtle references laid out plainly.

Wrapping up the on-disc extras are the film's trailer (2:14), which sells the movie on prurient interest and Antonioni's reputation, while the teaser (1:01) offers a cut-down version of the trailer, made entirely of still photos (recalling a scene in the film.)

As is the norm for Criterion, there's a printed pack-in, but unlike the usual brochure, this time you get a hefty 68-page, perfect-bound book that's gorgeously designed in red, white and black, and illustrated with images from the film. The length allows it to hold an informative essay by author and NYU Contemporary Italian Studies professor David Forgacs, a chapter from Stig Bjorkman's upcoming Antonioni book (with details from his time on the Blow-Up, the questionnaires Antonioni used to get to know photographers and artists in preparation for the film and the short story by Julio Cortazar, so you can see where the film got its start (and how different it ended up. This wealth of insight makes for a terrific package. 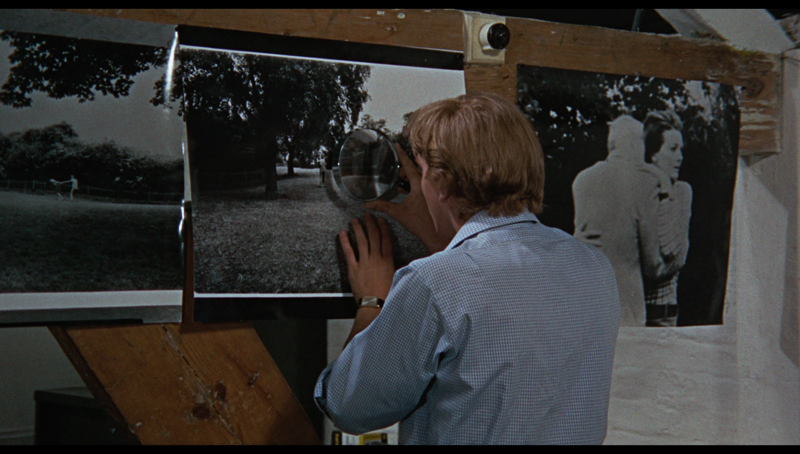 The Bottom Line
Surreal, often methodical and gorgeously filmed, Blow-Up is undoubtedly the work of a master artist, complete with a vagueness that leaves it open for interpretation, as well as disappointment, due to the inconclusive ending. However, if you got that far, did you really expect a straightforward finale from a film featuring so many mimes? The presentation is wonderful however, and the host of extras reveal much about the production, as well as the work of the director. Blow-Up won't be everyone's cup of tea, but for the open-minded fan of creatively-designed cinema, it's a treat to watch.