If not for Hollywood's continued persistence over the years of revamping, retooling and rebooting classic television properties for modern moviegoers, the idea of turning The Smurfs into a major studio production would have been preposterous. A fantastical notion so ridiculous it would've been met with sudden bursts of laughter and likely followed by some cordial mockery. But as it turns out, someone heard the idea, took it serious rather than a joke, pitched it to some studio heads, and here we are. A live-action, CG-animated motion picture of the little blue humanoids living in mushroom-shaped houses, spreading their infectious cheer and jubilee for life while singing their even more contagious signature jingle. "La la la-la-la-la, la la-la la la." Great! Now, that's going to be stuck in my head for the rest for of the month.

Thankfully, the adaptation from director Raja Gosnell, whose work in the Scooby-Doo franchise, Big Momma's House, Never Been Kissed and Beverly Hills Chihuahua speak volumes on his talent in the family-friendly arena, is not quite as memorable or addictive. Sure, the movie comes with a few delightful moments, mostly from the animated blue creatures commenting on modern marvels like Google, earning, at best, a giggle or a smile. But the visual gags, and overall humor for that matter, are of the most simplistic, prosaic variety, the sort only targeted at the youngest viewers in the audience, which means adults roll their eyes at the silliness while the little tykes guffaw at the sight of Gutsy Smurf (Alan Cumming) riding an electric citrus juicer like a mechanical bull. And how adorable Papa Smurf (Jonathan Winters) refers to a telescope as a "star gazer."

To be fair though, we are talking about the Smurfs, characters created by legendary Belgian comics artist Peyo, which have always been meant for younger audiences. The adults in this sword-and-sorcery fantasy are really the bad guys, forcing the admittedly cute beings to conceal their Smurf village via magic in the forest. Well, technically, the only known villain in their universe is Gargamel (Hank Azaria) and his feline minion Azrael, but it's safe to assume the Smurfs haven't had the best experience with other humans as well. When they travel to modern-day New York City through a blue portal while escaping the clutches of the diabolical alchemist, their first reaction at the sight of Neil Patrick Harris is bloodcurdling screams and running away. Even in frightfully gigantic form, Mr. Harris is the least scary thing about New York, so there's difficulty some other issues going on. 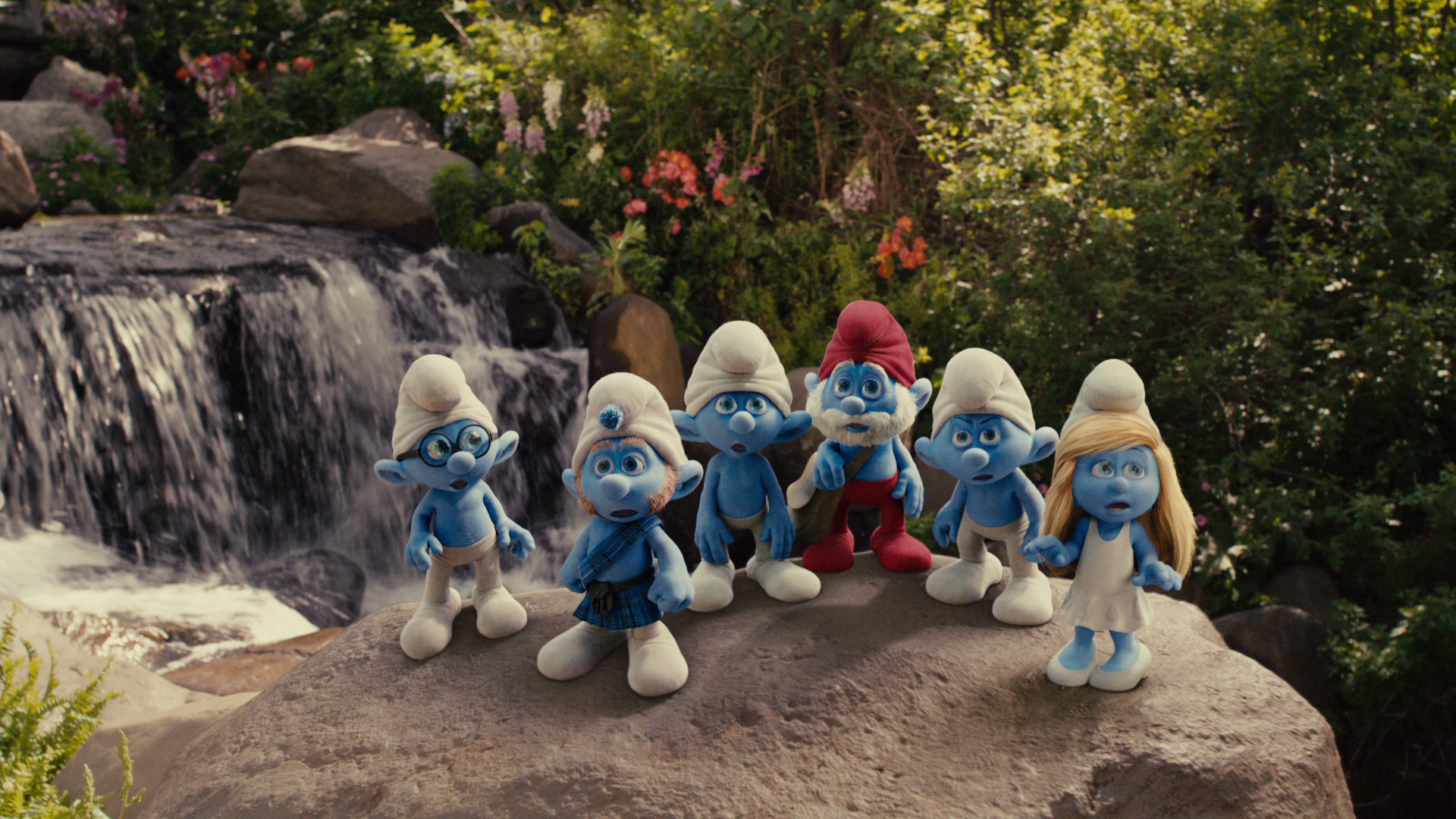 In either case, the Smurfs quickly realize they have a friend in Harris's Patrick Winslow, partly if not entirely thanks to his expectant wife Grace (Jayma Mays) befriending Clumsy Smurf (Anton Yelchin) in a bathroom fiasco. This is where the filmmakers pander to the grownups by having the little creatures smurf everything up (pardon the language) for Patrick, who's new promotion at a cosmetics company has him busily running around to satisfy the needs of Sofia Vergara but ignoring his role as soon-to-be father. Of course, this is all keep very innocent and within the realm of harmless. No matter how stressed or consumed by work, Patrick's worst moment is forgetting an ultrasound appointment and inoffensively losing his cool when the wrong ad promotion is sent to Vergara. In the end, it all expectedly proves beneficial to Patrick's career and everybody is happy.

There's never really a sense of danger or serious threat in The Smurfs, even in the film's last quarter when Gargamel seems poised to succeed when imprisoning Papa Smurf. The script, which passed through four different hands before deciding on this final draft, comes ready and equipped with some loophole or a way for escaping danger, such as giving Smurfette (Katy Perry), Brainy Smurf (Fred Armisen) and Grouchy Smurf (George Lopez) the opportunity to be heroes while Clumsy proves his personality trait can be of service. And even in these action-packed moments, there is good deal of eye rolling at the convenient plot contrivances. However, the innocuous modern-day fairy tale was not written for old fuddy-duddies like myself. It's for the smurfy little ones in our family, and for them, The Smurfs's infectious smurfness is the most smurftastic movie ever! 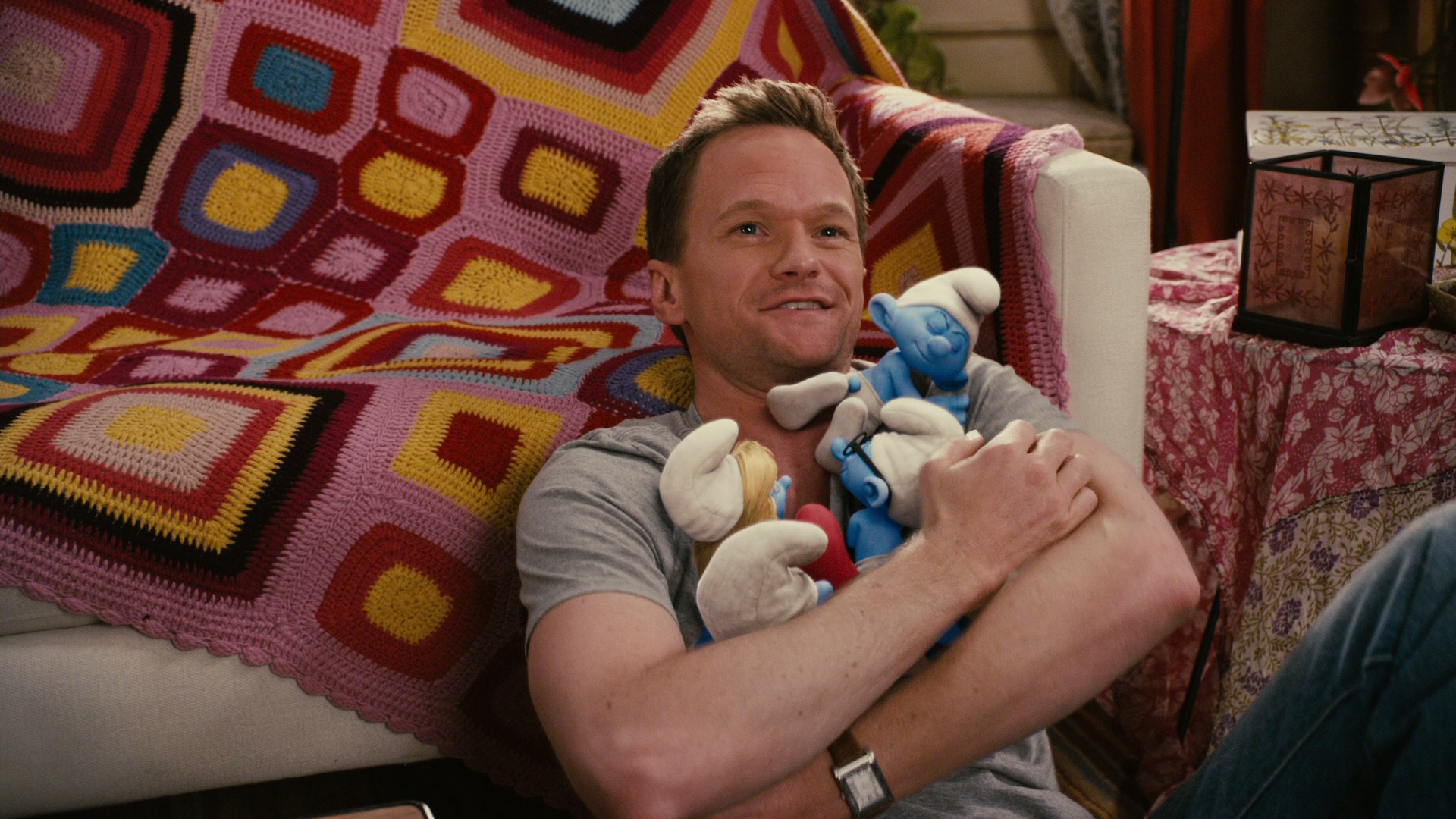 With razor-sharp lines and clarity in every frame, viewers can make out the most trivial detail, tiny nuance or particularity, and lifelike facial complexions expose pores and wrinkles in both the live-action cast and the blue-freckled faces of the Smurfs. From the opening moments, the 4K presentation dazzles the screen with a sumptuous array of richly-saturated colors, from brightly intense primaries and electrifyingly garish blues to bold, full-bodied secondary hues and sprightly flamboyant neon pastels.

Presented in its original 1.78:1 aspect ratio, contrast is right on the money and pitch-perfect with remarkable visibility of the most minute feature and crisp, radiant whites that provide specular highlights a brilliant luminosity and sparkle. Best of all, black levels are some of the most opulent and inky-rich of the format with superb gradational differences between various shades while maintaining distinct clarity within the deepest, penetrating shadows, making for some of the most gorgeous nighttime sequences. All in all, the CG, live-action movie is a stunning feast for the eyes. 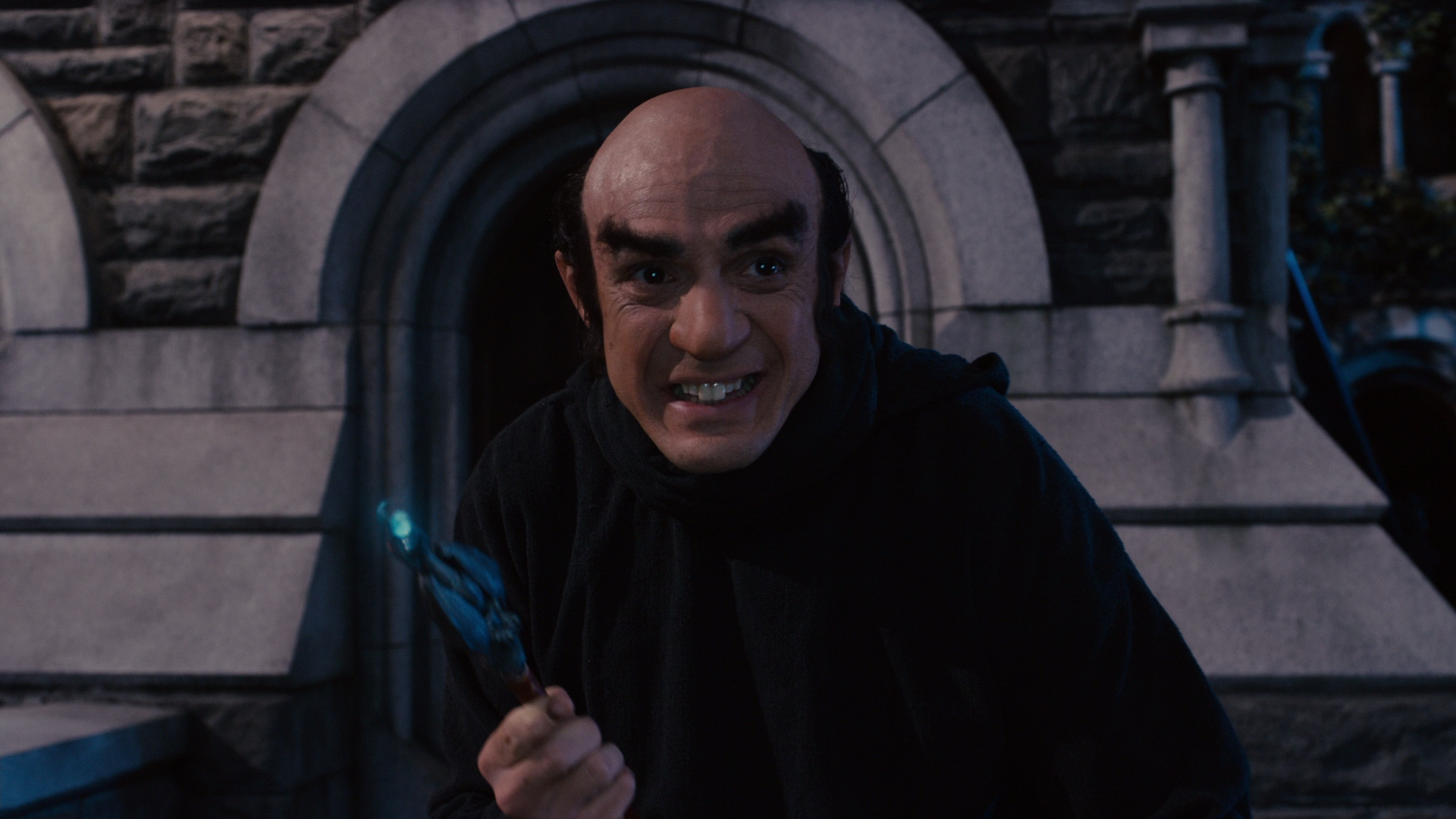 On the whole, the flamboyantly rowdy animated film is a largely front-heavy design, exhibiting superb detailing and fidelity in the mid-range and a variety of ambient effects that fluidly spread across all three channels. On various occasions, those effects extend into the front height channels with discreet clarity, creating an amusing half-dome wall of sound. But the room finally comes alive with the boisterous commotion of busy city streets, a crowded park and a hectic business office employing the surrounds. During some of the more rambunctious moments, particularly in the final battle against Gargamel, the Smurfs and other various objects flawlessly pan all around the room and into the overhead channels for a very satisfying dome-like soundfield. Quieter scenes keep things active with a variety of subtle atmospherics as well, but the ceiling speakers are rarely used.

Nevertheless, with distinct, precise vocals and a palpable, occasionally potent low-end for a weighty presence, the object-based format is a welcomed upgrade to its predecessor, making for an improved immersive experience for fans of the 4K Ultra HD Blu-ray format. 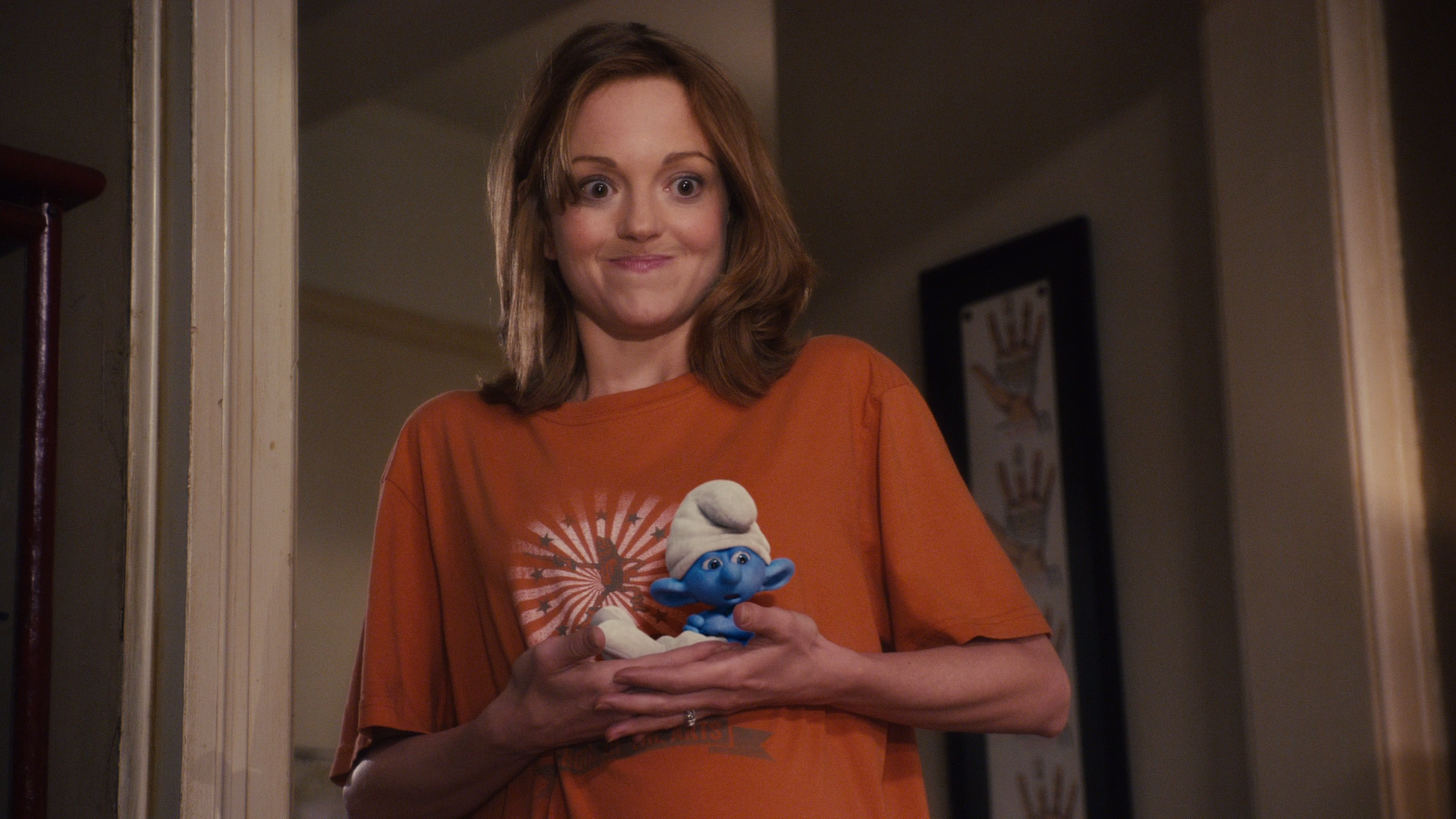 Sony Home Entertainment brings the live-action CG-animated film to Ultra HD Blu-ray as a two-disc combo pack with an UltraViolet Digital Copy code and housed inside a black, eco-vortex keepcase with a glossy slipcover. Sitting opposite the 4K HDR10 disc, the regular Blu-ray disc contains all supplemental material, presented in HD.

Bonuses start with a trivia track Smurf-O-Vision Second Screen Experience that can only be watched in conjunction with the movie using Apple products, and it's followed by an instructional video (1 min). After that, owners can play an interactive game with their remote, called The Smurfs Fantastic Adventure Game. The package also comes with two Audio Commentaries, starting with director Raja Gosnell talking about his approach to the project, some of his creative decisions and thoughts on the story's various jokes. The second track is a discussion on the production's technical aspects featuring the writers and VFX team.

Viewers can also enjoy an assortment of featurettes, starting with an eight-minute demonstration of how artists brought the cartoon to life in Comic Book to the Big Screen. Then, voice actors share their thoughts on performances and characters in Smurf Speak: Meet the Cast (9 min). Afterwards, a ten-minute Going Gargamel comes with cast and crew interviews praising Hank Azaria's performance while the actor explains his inspiration. Next is a nine-minute, five-part featurette called Progression Reels and a Happy Music Montage (2 min). It comes to a close seven minutes of Deleted & Extended Scenes, a gag reel dubbed Blue-pers and a set of Previews. 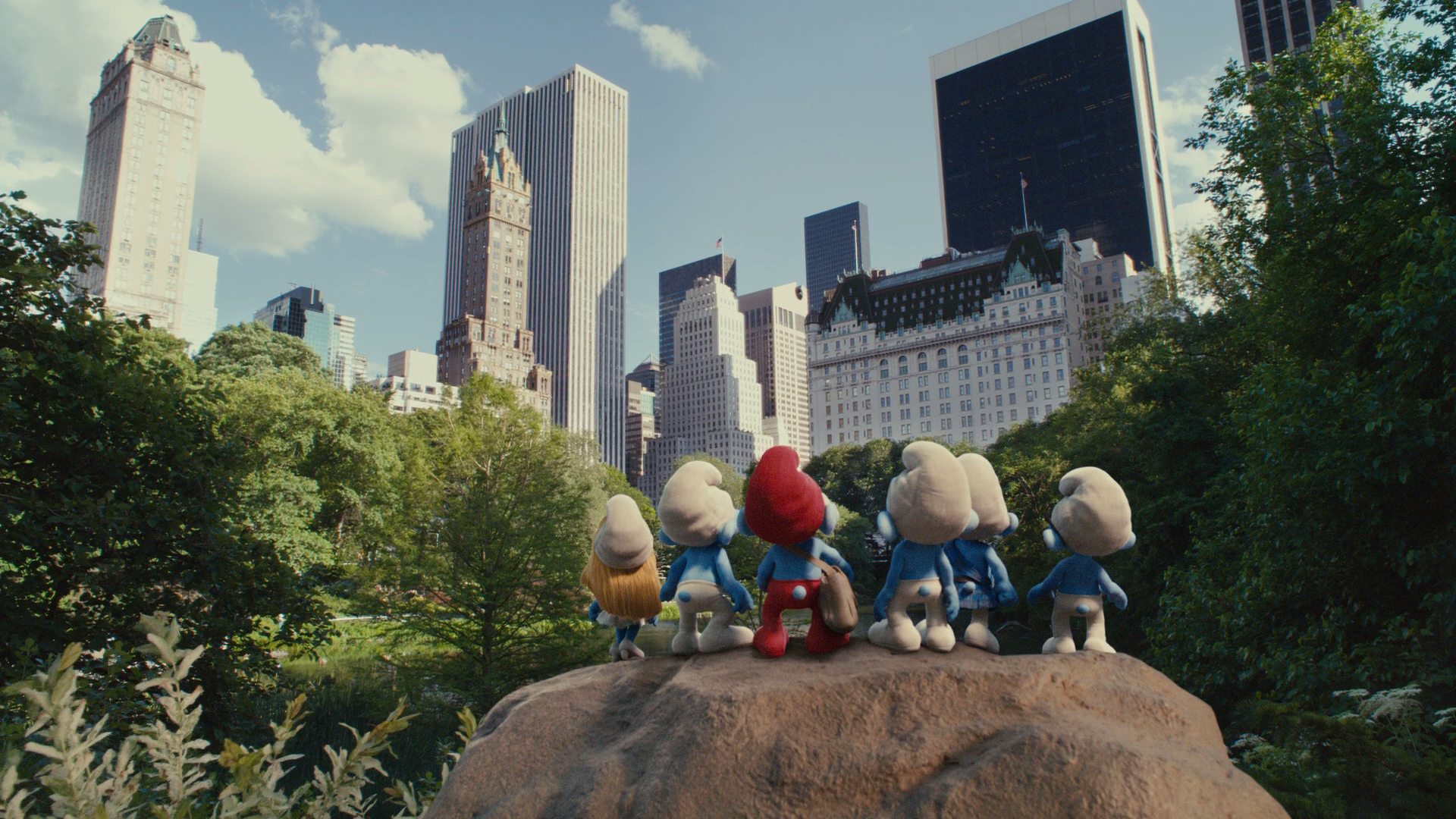 In today's Hollywood practice of revamping, retooling and rebooting classic television properties for modern moviegoers, the idea of The Smurfs as a major studio production is not at all surprising. However, the end result is a film that will only attract the little smurfs in the family while the grownups will likely find little to enjoy in the silliness and cartoonish humor. On the other hand, the 4K Ultra HD Blu-ray arrives with a reference-quality 4K presentation and an excellent Dolby Atmos soundtrack. Porting over the same set of supplements as its Blu-ray counterpart, the UHD package is recommended for those fans looking to upgrade.