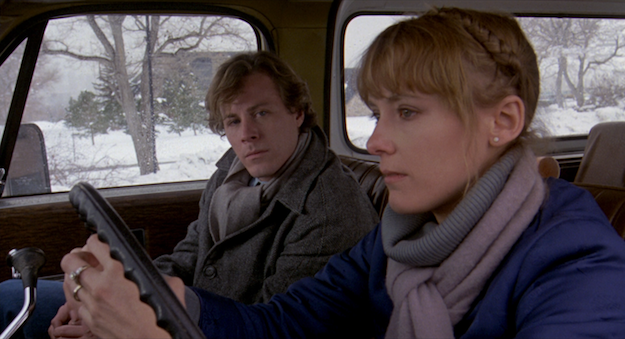 Chilly Scenes of Winter might be the best American movie about a romantic break-up. The film is not well-known now, but it wouldn't be hard to imagine someone on the creative team of High Fidelity half-remembering this smart little flick and taking just a little inspiration from it. After all, both films originate from internal-monologue-heavy source novels about mopey males and were transformed into leaner and arguably more effective works of cinema. Writer-director Joan Micklin Silver (Hester Street) machetes her way through the jungle of wry asides, ennui-soaked ruminations, and stray incidents collected in Ann Beattie's well-regarded first novel and sculpts them into a sharply focused romantic dramedy, without ever sacrificing the bleakly funny flavor and observational acuity of the original book.

In addition to Silver's effective adaptation, the film also benefits from spot-on casting. It's as though the characters walked straight off the page and onto the screen. John Heard is note-perfect as Charles, a civil servant in his late twenties who can't stop thinking about his most recent ex. Like Rob in High Fidelity, we come to like Charles for his self-deprecating sense of humor, even as we cringe at his (possibly familiar) possessiveness and obsession. Charles's dreary present-day is punctuated with flashbacks to his brief courtship with Laura (Mary Beth Hurt), a married woman separated from her ex-jock husband, nicknamed Ox (Mark Metcalf). Charles is just mad about her, constantly doling out compliments on her looks, her cooking, and her spirit. Laura is suspicious of his affection, partly because she feels unworthy of it, but she also reacts badly when Charles hangs out with his friends one Sunday and she doesn't get lavished with the same attention.

In the present-day scenes, Laura has gone back to Ox, but she doesn't look happy about it. She loves her young stepdaughter, but that's about it. This little crack in the happy-family facade gives Charles some hope, but that hope just allows him to get more obsessed and unhappy.

Filling out Charles's world is his best friend Sam (Peter Riegert), an unemployed ladies man who hangs out enough to become Charles's de facto roommate. Charles is also frequently pestered by his mentally unstable mother (an excellent Gloria Grahame) and his friendly but situationally awkward stepfather Pete (Kenneth McMillan). Tarah Nutter is Charles's younger sister, visiting from college, who is better at adjusting to life and acting normally than Charles. Jerry Hardin is Charles's boss, who asks for misguided favors to help his son's flailing sex life, while Nora Heflin plays a nice-enough typing pool secretary that Charles should reasonably be interested in, but whom he can't bring himself to ask on a date.

Your reaction to Chilly Scenes of Winter might hinge on how much you relate to its flawed characters. For better or worse, I have known the people in this film in my life -- ah, but how I wish I had seen them with the clarity of the filmmakers' vision here!

Even if you don't know folks like the characters in this film, it's hard to deny that the film does a beautiful job of keeping its story grounded in reality without ever becoming unentertaining and dreary, as its title might portend.

And speaking of that title... United Artists was famously indifferent to the film, dumping it in theaters in 1979, under the ill-fitting moniker Head Over Heels, packaged as a straight-up romantic comedy. It bombed. A few years later, in 1982, the film managed to get another shot in theaters, through the recently established United Artists Classics label. This time around, the title from the novel (itself nicked from a folk song about wintry longing) came back, and Silver got a chance to "fix" the ending, trimming away three minutes that felt tacked-on and Hollywood-y. Twilight Time's new Blu-ray features the 1982 version, and that original ending is not included as a bonus feature. However, interested parties can find bootleg-quality clips of it online. 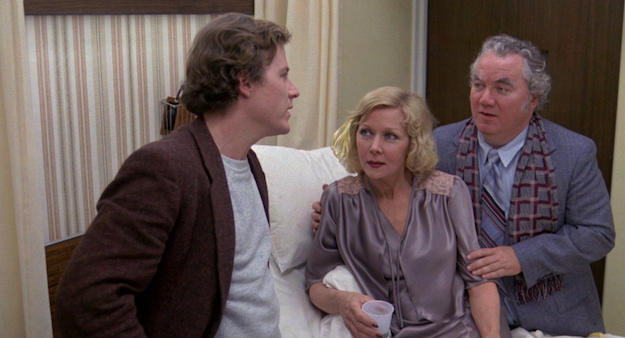 The Blu-ray
Chilly Scenes of Winter is available in a limited edition of 3000 copies. As usual, a color booklet with a liner note essay by Twilight Time's Julie Kirgo is included.

The Video:
Like a lot of '70s dramas, this film's overall color palette is beige AF. As such, the AVC-encoded 1080p 1.85:1 transfer is never eye-poppingly beautiful, but it should still be commended for strong detail reproduction (even though the film is shot with a relatively soft look) and overall clarity and stability.

The Audio:
Not a lot of aural complexity here, although the dialogue is always clear and naturalistic. Certain music cues, like Bette Midler's rendition of "Skylark," exploit the range of the DTS-HD MA 2.0 mono audio mix quite effectively. An optional English SDH track is provided.

- A slightly front-loaded, but still worthwhile commentary. Robinson discusses being a first-time producer, partnered with Griffin Dunne and Mark Metcalf, who both have roles in the film. Silver has a spotty memory about the making of the film, leading to many dead spots where the two women just watch it. On the other hand, Silver might just be holding her tongue on certain subjects, since when they broach the film's botched initial release, she still sounds hurt by it. 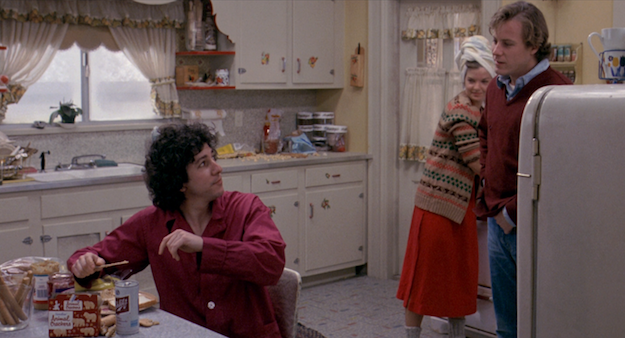