For the Love of Spock

FilmRise // Unrated // March 14, 2017 // Region 0
List Price: $19.95 [Buy now and save at Amazon]
Review by Stuart Galbraith IV | posted April 6, 2017 | E-mail the Author
Such an industry is Star Trek that it supports not only various television and film series, but a growing number of documentaries about it. The first seems to have been Trekkies (1997), directed by Roger Nygard and starring Denise Cosby, with affectionate humor it explores the world of Star Trek fandom. It's funny but not condescending, introducing its audience to fans whose obsessions never hurt anyone but often do good or are empowering, and it's even rather touching at times. A 2004 sequel ventured outside the U.S., in search of international fans.

In between came Mind Meld (2001), a My Dinner with Andre-type conversation between Original Series stars William Shatner and Leonard Nimoy. What might easily have been a vanity project (Shatner co-produced) instead proved to be a highly engrossing dialogue between two actors uniquely positioned in this pop culture lexicon. Shatner has since followed Mind Meld with other documentaries (that he's directed), notably The Captains (2011), an equally impressive, probing series of conversations with the varied actors that have assumed the franchise's captain's chair on various shows, with back-breaking schedules that sometimes put destructive strains on their life at home. Like Trekkies one doesn't have to be a fan to find such documentaries fascinating.

Now comes For the Love of Spock (2016), a feature both about the iconic character of Mr. Spock and the actor who played him for nearly half a century, Leonard Nimoy. His son, Adam, directed it.

It's an entertaining and worthwhile effort, if a bit disappointing compared to these earlier offerings, clearly an influence. (It even contains a few bits of footage from Mind Meld.) Originally the project was intended as a documentary about the character of Spock only, but Nimoy's sudden if not unexpected death in 2015 led his son to rethink the project to more of a tribute to his father. As it came together, he decided to make his sometimes-troubled relationship with his father part of the story as well. 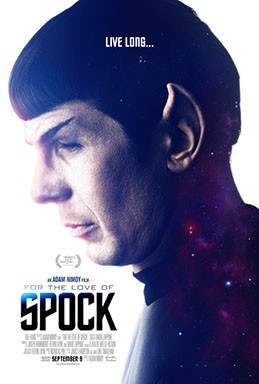 The movie follows a predictable course, tracing Nimoy's roots, his career as a struggling actor, landing the role of Mr. Spock on Star Trek, and the strain that "overnight success" put on Nimoy as an actor, husband, and father. Adam Nimoy discusses how his own struggles as a child and as an adult impacted his often rocky relationship, which was more or less resolved in the years prior to Nimoy's death.

The film is a generally satisfying jumble of tributes from interviewees, some drama with the Nimoys - not altogether different from thousands of other families, ultimately - and scads of great film clips. On this latter point the crowdfunded project managed to license an enormous amount of famous Spock clips from the original TV series and later theatrical films, but far more interesting were the too-brief snippets from movies like Kid Monk Baroni (1952) and TV shows such as The Lieutenant, not to mention all of the material covering Nimoy's post-Star Trek stage career.

Adam Nimoy seems unaware that many of the anecdotes actor Nimoy tells about the show and Mr. Spock are already well-known to fans (the aborted first pilot, network concerns about Spock's "devilish" appearance, etc.), or maybe he was aiming for a wider audience unfamiliar with those well-worn tales. (Doubtful, though, that many non-fans could've been lured to a movie entitled For the Love of Spock.)

In any case much of Nimoy's other work is glossed over: his pre-Star Trek films and (especially) TV work, the Mission: Impossible years that immediately followed, the long-running in Search of…. In the rush to cover Nimoy's diverse pursuits, even his (sometimes controversial) work as a photographer and fitful feature film director goes by too quickly and superficially.

Perhaps most surprisingly, For the Love of Spock is more a rundown on Nimoy's accomplishments with anecdotes, rather than what it implies to be, namely a study of how an actor shapes a character and how this character shapes him. How did Nimoy learn to act, to hone his craft, and evolve as an actor? (Nimoy studied at actor Jeff Corey's school, and if memory serves also taught there for a while.) Once he became a director, how did his own experiences help the actors in his charge?

Books and other documentaries covering Nimoy's Star Trek years hint that the already pretty serious Nimoy, gravely concerned that the pointy ears and green pallor would be laughed at, overcompensated by taking the role of Spock a little too seriously. Unlike Shatner, highly respected for his dramatic roles on anthology television programs, was known to joke around between takes where Nimoy generally stayed in character for the long, 18-hour shooting days, which this film acknowledges. But it doesn't mention Nimoy's proactive approach (some would say meddling) bombarding the show's producers and writers with memos and phone calls, suggesting or demanding changes to scripts, etc. A movie like this begs the question: Was Nimoy admirably dedicated to his character or a pain in the ass? Maybe both?

This reviewer hasn't read Nimoy's autobiographies, beginning with the famous I Am Not Spock, only fleetingly glimpsed in the film. The documentary suggests Nimoy found steady work after Star Trek, but if Nimoy struggled with being accepted (or even taken seriously) in other roles the film isn't much concerned about that. Shatner, for his part, has in his documentaries talked about his feelings of awkwardness around fans, and the long road of coming to terms with such a career-defining part. And where Shatner never seems to take himself too seriously, Nimoy has such gravitas that, even when he tries to chuckle about something funny, it usually comes off as forced, at least in the on-camera interviews I've seen.

The film makes very effective use of home movies of the Nimoy family at home, and when discussing the Star Trek years Adam Nimoy and his sister are admirably forthright about the show's negative impact on life at home. Adam Nimoy is clearly sincere, but it gets a bit awkward toward the end. He visits his first Star Trek Convention, but nothing really happens there. An interview with actor Zachary Quinto (currently carrying the torch as Spock in the recent film series) mutates into Quinto interviewing Adam Nimoy. Even stranger is a discussion with actor Jim Parsons about an episode of The Big Bang Theory in which Adam Nimoy interviews Sheldon Cooper (Parsons's character) about an upcoming documentary about the elder Nimoy.

Generous supplements include a director's audio commentary, trailers, "On Set with ‘The Big Bang Theory,'" a panel discussion at the Tribeca Film Festival, a Kickstarter gallery, and a very funny and enjoyable "Trivia Time" segment with hardcore fan Jason Alexander, who does a dead-on Captain Kirk. Also included is Adam Nimoy's short film Leonard Nimoy's Boston, which is pretty much like every adult child's experience listening to the Old Man yammer about his nearly unrecognizable home town.

Though flawed in numerous ways, For the Love of Spock is still a must-see for Star Trek fans, a cozy and comforting film that partly satisfies, partly leaves one wanting something a bit deeper.