Shout Factory // Unrated // January 1, 2017
List Price: $14.99
Review by Stuart Galbraith IV | posted April 29, 2017 | E-mail the Author
The earliest television Westerns, shows from the late 1940s and early ‘50s, mostly were adaptations of successful, long-running theatrical B-Westerns, series starring William "Hopalong Cassidy" Boyd, Roy Rogers and Dale Evans, Gene Autry, etc. Although many of these shows originated as B-Westerns for general audiences or even specifically adults, by the time television was rolling out their audience consisted primarily of children who adored such shows.

In past reviews I've extolled the virtues of TV's earliest adult Westerns, particularly Gunsmoke (premiering in 1955) and Have Gun - Will Travel (1957), but one series predates those, a semi-adult transitional TV Western called Death Valley Days. An anthology series, it was syndicated rather than a primetime network series, but enjoyed an unusually long and successful run. It premiered in 1952 and ran a staggering 18 seasons, through 1970, with 452 episodes.

Though not listed on the credits, Gene Autry was its executive producer for its first few seasons. His Flying A Productions had at its peak three network and four syndicated TV shows, with the others, including The Gene Autry Show, Annie Oakley, and The Adventures of Champion, geared mainly for kids.

Death Valley Days has the same quality production values as those shows; Flying A's series had a distinctive polish about them. And yet Death Valley Days was, at least initially (I've seen only episodes in this season one package), more adult. 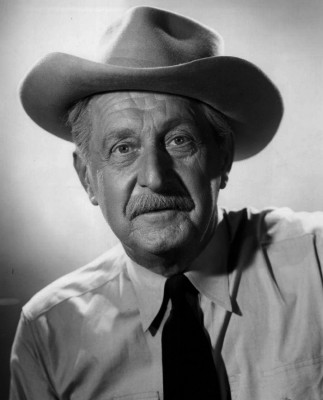 The o-o-o-o-l-l-l-l-d ranger himself, Stanley Andrews

The series was, until 1963, hosted by "The Old Ranger," played by character actor Stanley Andrews (the voice of Daddy Warbucks on radio's Little Orphan Annie, and the angry husband who punches Jimmy Stewart in It's a Wonderful Life). For the 1964-65 season, Ronald Reagan took over as host.

The Old Ranger narrates supposedly true stories of the Old West and Death Valley, California in particular. First season episodes alternate between stories of hard, sometimes-grim pioneer life and more children-pleasing tales teetering toward classic B-Western mode. In "How Death Valley Got Its Name," the premiere episode, a wagon train from Salt Lake City finds itself trapped in the desert, the point of no return, forcing a greenhorn and an experienced trail driver to try and get help while several families endure dehydration and disease. An impressive episode to kick off the series, it' closer in spirit to Westward the Women (1952) than My Pal Trigger.

"She Burns Green" is also above average, about a gold miner (James Griffith) who marries a young, materialistic Hispanic woman (Donna Martell) and their devotion to one another is continually tested by the brutal, spartan living conditions. "The Death Valley Kid" is a far more conventional Zorro-type tale, and the next episode, "The Lost Pegleg Mine," partly revolves around underage siblings competing to find a legendary lost mine.

But that episode and others are interesting in that they play around with the standard television Western format. In "The Lost Pegleg Mine," for instance, a present-day search for the mine is entertainingly intercut with an amusing account of ol' Pegleg himself, so tough that he amputates his own gangrenous leg when his companions prove too lily-livered. (The episode also features beloved character comedian Andy Clyde.)

Death Valley Days isn't exceptional television drama like early Gunsmoke and Have Gun - Will Travel often were. Its ambitions were simpler and more modest, but still slightly ahead of its time. And while the show like other syndicated series of the 1950s is still relatively cheap, generally focusing on a small number of a characters with two or three locations and a compact, confined story, Death Valley Days has is more polished than, say, the often threadbare production values of programs like Adventures of Superman.

Filmed in crisp black-and-white 35mm and restored by Cinelicious, the masters on Death Valley Days must look great, though something funky seems to have happened in the authoring, at least on the shows I examined, which exhibit the strange jerkiness in motion one occasionally encounters. On small monitors it's barely noticeable, but on y projection system and big screen it was singularly distracting. Similarly, the audio has that kind of slightly tinny over-processed sound if one listens for it. The Complete First Season includes all 18 episodes on three discs, region 1 encoded. No Extras.

A worthwhile series that still holds up most of the time, Death Valley Days: The Complete First Season is Recommended.